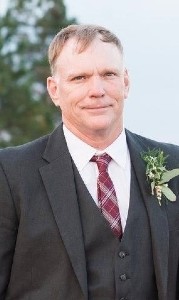 A.L. was born in Chowan County on April 20, 1960, and was the son of the late Abram Lindsay Sr. and Janet Wiley Hurdle. In addition to his parents, he was preceded in death by his son, Nicholas Andrew Hurdle.

Employed in the maintenance department at Lake Prince Woods in Suffolk, he had formerly worked with Savin and Hill Appliance in Ahoskie. A member of Eureka Baptist Church where he had served as a deacon and as secretary of Sunday School, he also enjoyed the fellowship of the Corapeake Ruritan Club. A faithful donor in the area American Red Cross Blood Drives, his most recent donation had raised his total giving to 13 gallons. A veteran, he had served for four years in the United States Air Force.

Surviving is his wife of 38 years, Virginia Taylor “Ginny” Hurdle and their sons and their families: Joseph Hurdle, wife Christina, and their son Adam, of Edenton; and Alex Hurdle, wife Alex, and their son, Andrew, of Durham. Also surviving are three sisters, Betty H. Joyner of Ahoskie, and Regina Hurdle and Gail Hawkins (husband, Mike), of Hobbsville; and his mother and father-in-law, Mary Lee and Frank Taylor of Corapeake.

Funeral services will be held at 2 p.m. Friday in Eureka Baptist Church and will be conducted by his pastor, the Rev. David Lawson, and by his friend, Lake Prince Woods Chaplain Gary Newsome. The burial will be next to Nicholas in the church cemetery. For everyone’s health and wellbeing, the family requests that masks be worn by those attending the service. No formal visitation is planned; however, friends are invited to visit the family at the residence, or at the gravesite immediately following the service.

The family asks that flowers be omitted and contributions in his memory be made to the Nicholas Andrew Hurdle Scholarship Fund, in care of Faye Casper, 104 NC Highway 32 N., or to the Eureka Baptist Church Cemetery Fund, in care of Marilyn Copeland, 509 Folly Road, both in Sunbury, NC 27979.

Miller Funeral Home, 304 Main St., Gatesville, N.C. is assisting the family with arrangements and online condolences may be made by visiting millerfhc.com.