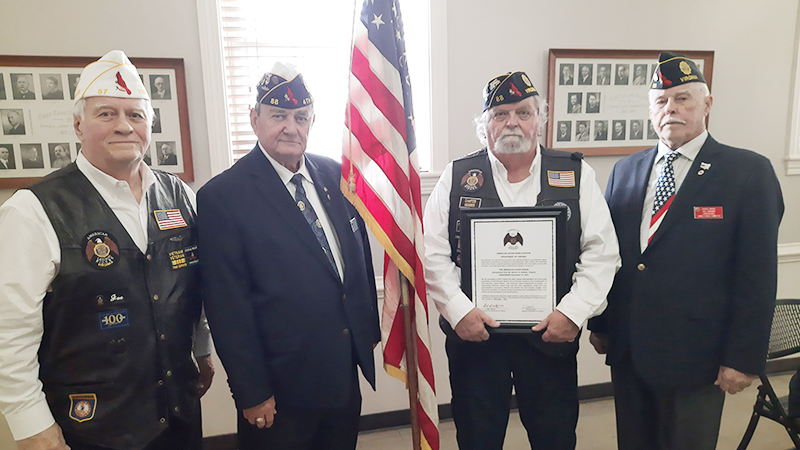 Suffolk now has a chapter of one of the largest and fastest-growing programs in the American Legion.

The American Legion Riders chapter was formed officially during a packed ceremony Nov. 13 at the Elks Lodge on West Constance Road. More than 100 people from all over the state enjoyed a beautiful day of motorcycle riding to be there for the occasion.

“We have over 41 Riders chapters throughout the state of Virginia, and 19 chapters were represented at the chartering,” said Bob Christie, a Nansemond Post 88 member and chartering director of the new American Legion Riders chapter. “I expected if the weather was nice, we were going to have fairly good turnout.”

“The Riders is the fastest-growing division of the American Legion, mostly I think because of our visibility,” Christie said. “We’re kind of like rolling billboards for the post. And we appeal to younger people as well.”

Christie was the chartering director of a Riders chapter in Midlothian when he lived there. When he moved to Suffolk, he wondered why there was no Riders chapter here and soon became inspired to start one himself. After he got the blessing of his post commander and adjutant, he started recruiting around the end of June, and by September had enough members committed.

Six members are required to start a chapter, and the new Riders chapter was chartered with nine. He got a 10th member the very next day.

Garlitz said the new chapter is the southernmost in Virginia. “It’s a big selling point for the post” to have a chapter, he said. “They are helping the community.”

Post 88’s founder and adjutant, Gerald Rhoads, said he is excited about the new chapter.

The American Legion Riders participate in many of the same programs as regular Legionnaires, but also have special programs as well.

Through their special Legacy Run, the American Legion Riders have contributed millions of dollars to a scholarship fund for the children of veterans lost in combat since 2001 or disabled, Christie pointed out. Many chapters also work in the community with veterans and students and participate in flag lines and memorial rides to honor vets.

Christie said Suffolk’s American Legion Riders chapter plans various events and is looking into doing information tables at various merchants, especially the weekend before Flag Day in June. They are also looking into opportunities to be of service with the Wreaths Across America, the VA Hospital in Hampton, the Albert G. Horton Jr. Memorial Veterans Cemetery, and various traveling monuments to veterans.