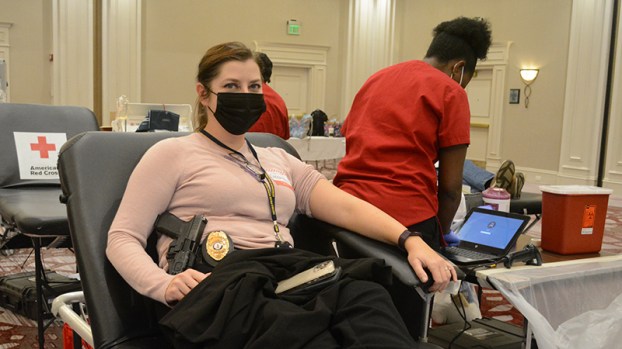 Suffolk Police Department Maj. Cassandra Garvin prepares to give blood during the Battle of the Badges blood drive on Dec. 28 at the Hilton Garden Inn Suffolk Riverfront. (Jen Jaqua photo) 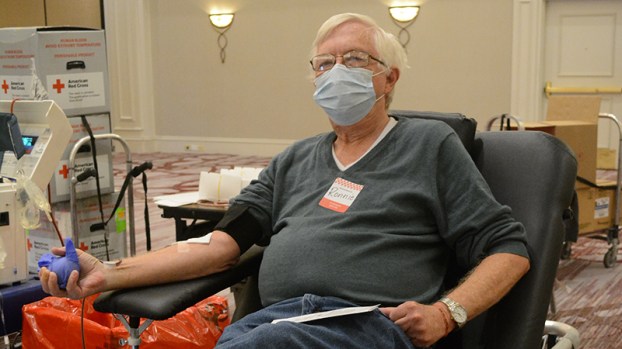 Ronnie Winslow works on his 100th blood donation during the Battle of the Badges blood drive on Dec. 28 at the Hilton Garden Inn Suffolk Riverfront. (Jen Jaqua photo)

The first “Battle of the Badges” blood drive held in Suffolk on Dec. 28 saved 87 lives and handed bragging rights to the Suffolk Sheriff’s Office.

The idea for the themed blood drive came from Katie Jones in the sheriff’s office, Sheriff E.C. Harris said. Each of the local public safety departments campaigned for donors to come support them. The drive was open to the public, so donors who showed up could choose which entity to support.

“I won’t let them live it down,” Harris said. “It’s a good friendly competition, and it’s helping folks, and that’s what’s most important.”

Harris warned it wouldn’t be long until there would be an opportunity for a rematch.

“I ain’t gonna wait but about six months, and I’m going to challenge them again,” the sheriff quipped.

Jones said she got the idea from seeing another group of agencies elsewhere in the country had done something similar.

“I thought that was pretty cool,” she said. “I think it was good for the community to see us work together. I don’t think one agency won; we all won.”

Interim Police Chief Alfred Chandler said he was grateful for the chance to make an impact.

“This event provides an opportunity for SPD to make another positive impact on our community, in concert with our Fire Department and Sheriff’s Department,” he said. “Our department was proud to be a part of adding to the greatly needed blood donations, which will hopefully lead to the preservation of life. This wonderful cause is yet one more illustration of law enforcement excellence through partnership with our community.”

Suffolk Department of Fire & Rescue Chief Michael Barakey was one of the first blood donors and said it was nice to make a difference.

“It is nice that the American Red Cross and certainly the local public safety agencies are coming here to try to give somebody a chance out there,” he said. He referenced the natural disasters throughout the country as well as local needs.

Barakey gave a nod to the Suffolk Professional Firefighters Local 2801 for being proactive in getting the message out to its members.

For one donor in particular, it was a special day. It was the 100th time giving blood for 67-year-old Suffolk resident Ronnie Winslow, who figured he started giving blood at age 18 or 19.

Blood supply in the country is dangerously low right now. Locally, the Virginia Red Cross Region has experienced a 41% decrease in new blood donors this year, according to the American Red Cross.

“We are truly grateful for the support, and we would not be able to meet the needs of area hospitals without organizations like Suffolk Sheriff, Fire and Police answering the call to host blood drives,” said Jonathan McNamara, regional communications director for the American Red Cross.

Make an appointment to give blood or platelets as soon as possible by using the Red Cross Blood Donor App, visiting RedCrossBlood.org or calling 1-800-RED CROSS (1-800-733-2767).