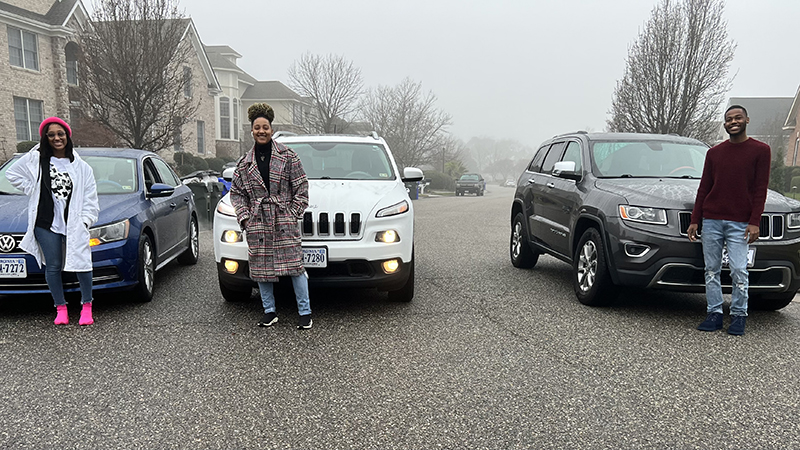 On Christmas morning, parents love sharing their children’s reactions on their favorite forms of social media. One Suffolk family got an audience much bigger than they expected.

Whitteney Guyton and her wife, Darmeshia, decided to surprise three of their children with cars for Christmas. When Darmeshia posted their reactions on her TikTok, the video received more than five million views.

With two children in college and a third finishing her senior year of high school, sharing vehicles between the family members was getting tricky, as all three are involved in extracurriculars. According to Whitteney Guyton, they never complained and somehow, they made it work.

“Our kids are amazing, and they asked for nothing this Christmas,” said Guyton. “The beginning of December, we decided to just get all three of them cars. They deserve it. They’re really good kids.”

They looked at cars and chose safe, reliable ones to fit each personality. Ymani Guyton received a blue Volkswagen Passat for traveling around Washington, D.C., studying architecture at Howard University. Simeon Guyton, who attends Hampton University, received a gray Jeep Grand Cherokee, since he always drives around his friends and brings them home. Zyana Guyton, a senior at Nansemond River High School, received a white Jeep Cherokee to help carry all her sports equipment.

The youngest is Keyon Guyton, who is 11 years old. Even though it wasn’t shown in the video, he received a go-cart, so he wasn’t left out on the new wheels.

Darmeshia had the idea of tying ribbon to the keys and topping it with a bow to stick in the tree. Each kid had a specific color and the viral video shows them pulling their ribbon until the key on the end came out of the tree.

“They were in shock,” said Whitteney Guyton. “They looked at us like, for real? Are you sure?”

Darmeshia started videoing their reactions just to commemorate the moment for the family. They never thought that it would explode as it did. Darmeshia has a decent social media following, as she uses it for her interior design business. So even though their three kids are prominent on TikTok, the parents never expected to blow up.

“It was authentic,” said Whitteney Guyton. “When they walked out, the big red bow had blown off our youngest daughter’s car. I think it being authentic is what resonated with people. It showed the love we share in our family.”

Even though many commenters suspected the video was staged, Whitteney Guyton reassured folks that the reactions were genuine. Their kids have always been grateful for what they have, she said.

“A lot of times, families like ours are not shown,” said Guyton. “If they are, it’s usually not the dynamic like we have it. Representation is everything. We have well-rounded children and are successful, and a lot of times you don’t see that.”