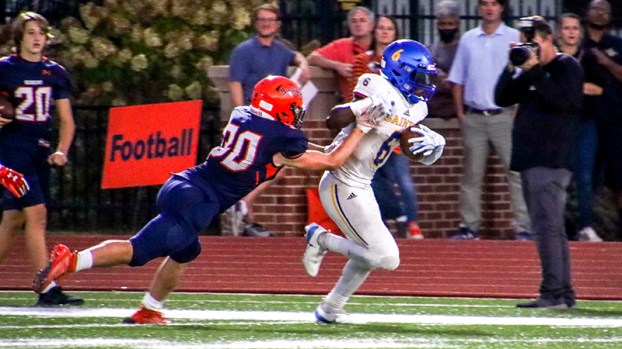 Nansemond-Suffolk Academy senior running back George Pettaway had an outstanding 2021 season that led to his being named the VISAA Division II Co-Offensive Player of the Year. (Michael Biehl photo) 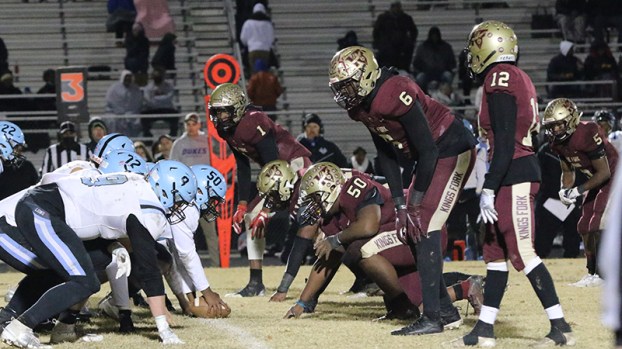 King’s Fork High School senior defensive end Kyree Moyston helped propel the Bulldogs to unprecedented heights in 2021, and for his efforts, he was named the VHSL Class 4 Defensive Player of the Year. (Titus Mohler photo)

By Jimmy LaRoue and Titus Mohler

The varsity football teams from King’s Fork High School and Nansemond-Suffolk Academy earned a variety of state accolades, including top individual honors, along with NSA’s varsity volleyball team this past fall.

Five players from the standout King’s Fork football team that finished 11-2 and reached the state semifinals were named to the Virginia High School League’s Class 4 all-state team, with Kyree Moyston named Defensive Player of the Year.

Varina’s Marcus Lewis was named Coach of the Year and all-purpose player Anthony Fisher was named Offensive Player of the Year.

Of the Bulldogs’ 11 wins, two were by shutout, and in seven of them, they allowed fewer than 10 points.

Nansemond-Suffolk was well-represented on the 2021 Virginia Independent Schools Athletic Association Division II all-state teams for football, led by senior running back George Pettaway, who was named Co-Offensive Player of the Year.

The Saints, who made a state semifinal appearance and finished 7-4 this past season, drew eight all-state selections, with six coming on the first team. Making the first team on offense on the line was senior Nathan Dowd and at running back was Pettaway, who has committed to play for the University of North Carolina.

In volleyball, NSA drew four state honors, including Coach of the Year for Robyn Ross.

On the VISAA Division II all-state first team for the Lady Saints were Marlin Price and Alyssa Waddy. Kyra Bradford was named to the second team.

Page Henry, of the Lady Saints, made the VISAA Division II all-state first team, and Meredith Edwards and Sara Rhodes made the second team.

In girls tennis, NSA was represented on the VISAA Division II all-state first team by Kayla Kosiorek and on the second team by Anne-Perry Harrell.

VHSL Class 5 all-state honors for football and boys volleyball, which could include Nansemond River honorees, have not yet been announced. VHSL Class 3, 4 and 5 all-state accolades for competition cheer, which could include Lakeland High School, King’s Fork and Nansemond River honorees, respectively, have also yet to be announced, along with Class 3 boys volleyball all-state selections.