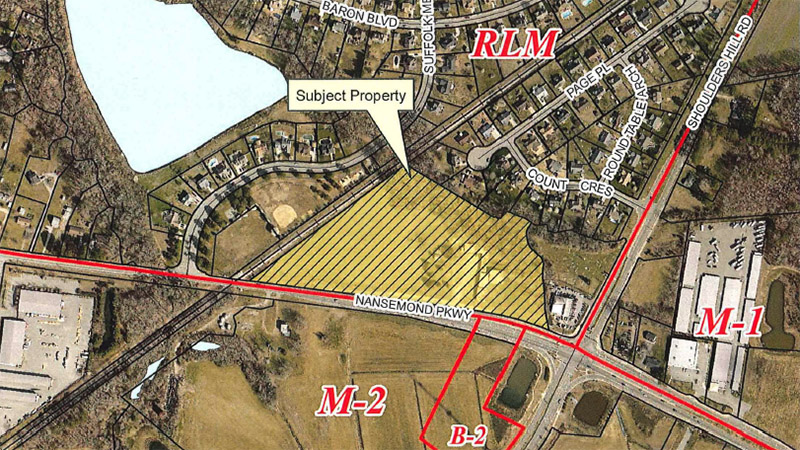 A developer hopes to put 204 apartment units on this land on Nansemond Parkway near Suffolk Meadows. Residents of the neighborhood are fighting back. (Submitted Image)

Suffolk Meadows residents were adamant in their opposition to a proposal to put 204 apartments on nearby property off of Nansemond Parkway.

Not one person who addressed the attorney for the developer of the project expressed support during a 90-minute meeting Jan. 6 at Zion Crossroads Church across from Northgate Commerce Park.

They said the apartments, proposed for property next to the church, would only add to traffic woes and safety concerns in an area lacking the infrastructure to handle it.

City Council will hold a public hearing and then vote Jan. 19 on a proposal to rezone 11.36 acres of property to allow for the apartments, the majority of which would go in two, four-story buildings on only a little more than five acres that would be used for the project. Each of the buildings would have 98 apartments in each, and there would be two smaller buildings with four units each.

City staff has recommended denying the rezoning application, citing traffic and high school capacity concerns, and the Planning Commission voted 6-1 Oct. 19 to recommend against zoning changes that would allow for the apartment complex across from Northgate Commerce Park. The zoning would change from residential low-medium density to residential urban-18 zoning, which allows for multi-family and single-family attached apartments at a density of 18  units per acre.

The proposed rezoning was scheduled to be on the agenda for council’s Nov. 17 meeting, but at the request of applicant C. Burton Cutright, the application was put on hold.

The proposed apartments would go on 11.36 acres of land that is currently used for agriculture, though less than half of it would be used.

Residents also noted that issues with train stoppages of 15 minutes at a time already cause people to drive dangerously through their neighborhood, and adding the hundreds of residents that would come from a new apartment community would only exacerbate the issue.

Jon Babineau, an attorney with BECO Asset Management representing the developer of the project, C. Burton Cutright of HBKC II, tried to assuage residents of their concerns, but was met with opposition throughout the evening.

He said the apartments would likely attract few people with children, as they will all be one- and two-bedroom apartments ranging in price from $1,271 to $1,892 per month.

The proposed complex, Babineau said, would contribute about a 1.9% increase to the traffic pattern and would generate the bulk of its traffic in the mornings and evenings when residents leave for, and then return from, work.

As the representative for the developer of the convenience store, gas station and fast-food restaurant to be put in across Nansemond Parkway at the entrance to Northgate Commerce Park — and familiar with the Tractor Supply Store going in the same area — Babineau said he is familiar with the intersection of the parkway and Shoulders Hill Road and its traffic patterns.

Level of service D means the area is “borderline unstable,” according to the Virginia Department of Transportation, and has a “high-density flow in which speed and freedom to maneuver are severely restricted and comfort and convenience have declined even though flow remains stable.”

Vice Mayor Leroy Bennett and Councilman Roger Fawcett, who were at the meeting, did not disclose their position on the project, though Fawcett said he had concerns about it.

Babineau said it would take at least two-and-a-half-years to complete the project — about a year to get the site plans approved for the project and another 18 months after that to build — if council approves it.