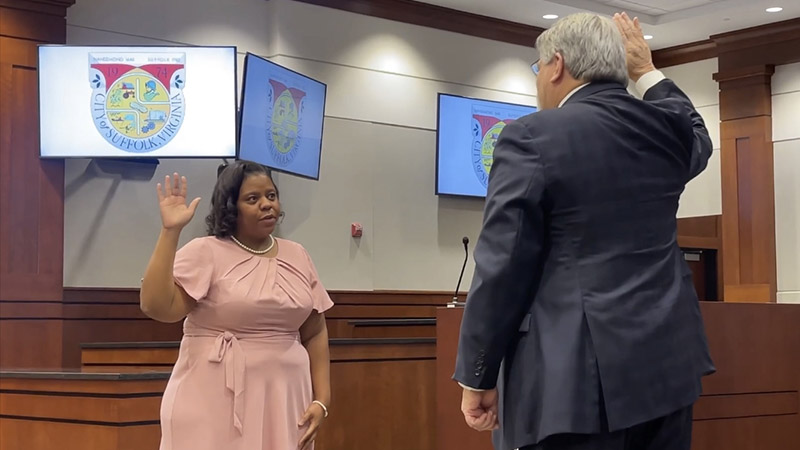 Narendra Pleas was formally sworn in as Suffolk’s next Commonwealth’s Attorney during a ceremony in the council chambers of City Hall Jan. 10.

Pleas, who defeated Patrick Bales to earn the post, succeeds longtime Commonwealth’s Attorney Phil Ferguson, who served for 44 years before retiring at the end of 2021. Pleas is the first African American to serve in the position.

“I want to assure you all, as friends, as family, as Suffolk, that I am here to continue to carry on what I’ve done over the course of my career,” Pleas said in remarks during her swearing-in ceremony.

In Sussex, Pleas worked for then-Commonwealth’s Attorney Lyndia Person Ramsey for five years, and said she learned a lot from the now-General District judge in the Sixth Judicial District of Virginia that she has brought previously to Suffolk, and will bring again to the city.

She said she would always strive for improvement, and said she wants the Commonwealth’s Attorney’s office to feel open, and she wants people to know what is going on in her office.

Person Ramsey said that while Pleas was in Sussex County, she gained a quick reputation “as a tough, no-nonsense prosecutor. Everybody loved her and respected the work she did.”

She said Pleas has taken “a major step in effecting much-needed change in her community.”

Randy Carter, clerk of the Circuit Court, said he has a unique perspective on what happens in the Commonwealth’s Attorney’s office, having served in it for 17 years. He said she is fully prepared to serve in her new capacity and “personally, I am tickled pink beyond belief that she’s our Commonwealth’s Attorney.”

“I’ve followed Narendra’s career when she was in Suffolk and to a lesser extent when she was away from Suffolk in Norfolk more recently,” Carter said. “We’re getting a fully committed, fair and visionary prosecutor here, folks, and you could not ask for anything more.”

The Mount Suffolk Pastor Karl Wilkins said two things stood out to him about Pleas — that she reminded him of his sister, and her indelible work ethic.

Wilkins said that when he helped organize a trip to a Washington Football Team football game, Pleas was doing everything from moving water and packing snacks to taking temperatures and serving kids on the bus. In that moment, Wilkins said, he developed a kinship with her.

“We know that we have somebody,” Wilkins said, “who’s going to serve the city to no end.”