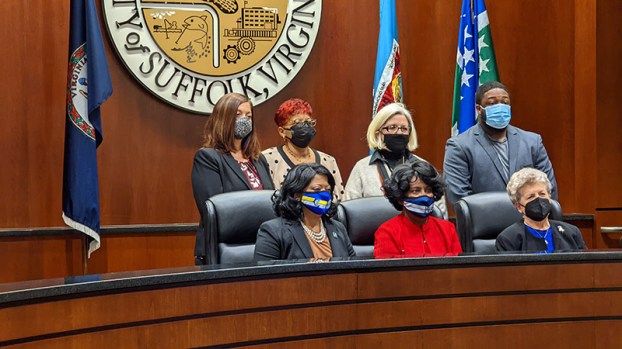 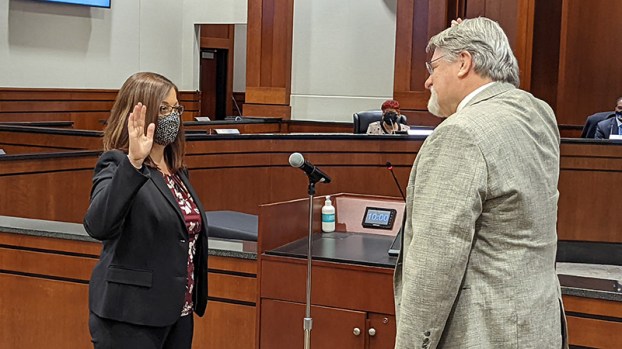 There will be no change to the Suffolk School Board’s top leadership roles.

Phyllis Byrum will continue as vice-chairwoman in a 6-1 vote, with only Story voting no.

Tarshia Gardner was also appointed as the board’s clerk and Keesha Hicks as deputy clerk in a 6-1 vote, with Story voting no.

Karen Jenkins and Mayo will serve as the two members of the Legislative Committee, with Tyron Riddick serving as the alternate.

The board also voted to make the following appointments to various boards:

Howell was sworn in by Clerk of Court Randy Carter as the Sleepy Hole Borough representative on the board prior to the votes for chairwoman, vice-chairwoman and committee appointments.

During the meeting, Story asked board attorney Wendell Waller what would happen if petitions for recall from the group Suffolk Citizens for Accountability against Brooks-Buck and Byrum get submitted. She noted that both are “up for recall.”

“If they are in fact recalled, they will no longer be on the board if the recall goes through,” Waller said, “which then means that someone would have to be appointed temporarily to fill their vacancies until there can be a special election. And so the board would need to reorganize during that time period.”

A special election, he added, “will probably, depending on when the recall happens, should it happen, would take place with the next general election, which could be as soon as November.” He said to fill any immediate vacancy on the board, like what happened when former board member David Mitnick resigned for health reasons, new members would need to be appointed.

“Since this has been a topic, I’d like to address it at this point,” Brooks-Buck said. “There have to be grounds for a recall. And since the announcement was attempted to be made public at a most inappropriate time, both at council and at this meeting, apparently there have to be legal reasons for a recall. There are none.”

On the group’s petition to recall Brooks-Buck, which it began circulating just prior to the 2021 general election, it cites violations of the Virginia Freedom of Information Act and that she “has repeatedly silenced any critic of the School Board and the school division” while attempting “to deflect her own responsibility for the School Board’s failures.” All of that, it says, “constitute(s) a neglect of duty, misuse of office and incompetence in the performance of her duties as a school board member.”

Critics of the board have addressed it in public comments in recent months, saying there is a lack of transparency on the board, something Brooks-Buck and other members have disputed.

Transparency, along with what the group says has been wasteful spending and “repeated violations of the law,” was an issue cited in the group’s press release in late October announcing the recall effort against Brooks-Buck.

A person who said they represented the group declined to be identified by the newspaper, despite multiple attempts by the Suffolk News-Herald to get someone to speak on the record on behalf of the group.

On its October news release, it stated that it was seeking 750 signatures, and on the group’s Facebook page, it had asked for donations to aid the recall effort to be submitted to Fred Taylor, a Suffolk attorney.

However, Taylor stated in an email, “I do not represent Suffolk Citizens IV Accountability and have no statement in regard to any recall matters.”

State law allows for a circuit court, once it receives a recall petition, to “remove any elected officer or officer who has been appointed to fill an elective office, residing within the jurisdiction of the court” for a number of reasons, including neglect of duty, misuse of office or incompetence in the performance of duties,” which is the apparent reason the group is looking to recall Brooks-Buck and Byrum.

The petition, by law, “shall state with reasonable accuracy and detail the grounds or reasons for removal and shall be signed by the person or persons making it under penalty of perjury.”

Once the petition is filed with the court, it will issue a rule requiring the person being recalled “to show cause why he should not be removed from office, the rule alleging in general terms the cause or causes for such removal.”

When it is returned to the court, it will be tried on the day stated in the rule and would have priority over anything else on the court’s docket, “unless good cause is shown for a continuance or postponement to a later day in the term.”

If there is a judicial proceeding, the circuit court could enter an order to suspend the person being recalled pending the hearing, and it “may appoint some suitable person to act in the officer’s place.”

If a recall trial takes place in Suffolk, the Commonwealth’s Attorney would represent the state, and anyone on trial for recall can demand a trial by jury. Each side could appeal a decision to the Court of Appeals. If the case “is dismissed in favor of the respondent, the court in its discretion may require the state agency or political subdivision which the respondent serves to pay court costs or reasonable attorney fees, or both, for the respondent.”

The law also states that no one signing, or circulating, a recall petition, can be held liable for any costs associated with the proceedings, including attorney fees and cannot have any sanctions imposed against them.