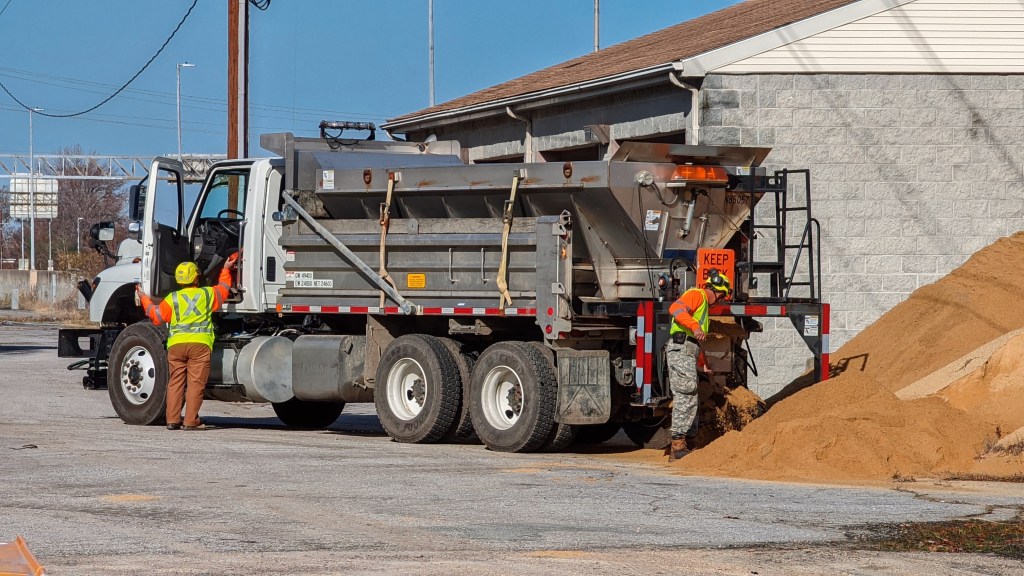 The city and Virginia Department of Transportation are busy preparing for an upcoming bout of forecasted winter weather, including a possible several inches of snow Friday into Saturday. Jimmy LaRoue/Suffolk News-Herald

With a hazardous weather outlook related to the stronger chances of snow and winter weather coming over the next few days, the city and Western Tidewater region are preparing to deal with whatever comes their way.

The National Weather Service forecast as of Wednesday morning calls for rain Thursday that is expected to change to snow in the afternoon and evening following an Arctic cold front, with a second round of precipitation, likely snow, expected later in the day Friday going into Saturday morning.

The current forecast for Suffolk and the Western Tidewater area calls for rain to start after 4 p.m. Thursday, with temperatures earlier in the day reaching near 50 degrees before falling to around 36 later in the day.

On Friday, snow is expected to begin after 1 p.m. with a high temperature near 30, with new snow accumulations between 1 to 3 inches possible. Snow is expected to continue falling into Friday evening, possibly mixing with sleet before 8 p.m., with a low around 23 and new precipitation amounts between a quarter and a half inch possible.

There is a chance of snow before noon Saturday with a high near 34.

Public Works will begin 24-hour staffing Jan. 20 and will continue that posture throughout the weekend to address any road issues, including plowing, which will begin on designated primary roads when needed. Operations will take place in 12-hour shifts, with each shift having 20 to 24 trucks running with plows and spreaders.

Its roadway division is responsible for clearing snow and ice from the city’s public streets, prioritizing access for emergency vehicles, hospitals and service vehicles such as school and public transit buses and refuse trucks.

The city has an interactive map of its priority routes for public paved roads online.

With safety and emergency accessibility being the primary concerns, the first priority is given to all primary or main roadways, followed by secondary arterials and connectors. Neighborhood streets are cleared last and, due to the size of the equipment, configuration of neighborhood streets and the presence of cars parked on the street, may not be accessible by City plows.

An interactive map of the city’s priority routes for public paved roadways within the city can be viewed online at bit.ly.com/suffolkmap. Timeframe for snow removal and priority can change with weather conditions.

Depending on the conditions, roads may be pretreated in the hours prior to the start of winter weather with a wet salt solution – brine – or a dry mix of sand and salt. Pretreating roads can be done to help reduce icy conditions, but the city notes that may not be the only treatment needed.

The city asks that, if it needs to deploy its snowplows, residents avoid travel unless absolutely necessary, and, if they need to travel, to drive cautiously and slowly as well as remove all snow and ice from the entire vehicle before driving. People should also leave plenty of room between other vehicles, avoid passing snow plows and avoid parking on streets when snow or ice is predicted.

It also asks residents to shovel sidewalks as soon as possible after a storm, but not to shovel it into the road, and to clear snow around fire hydrants.
While the city is responsible for its own roads, the Virginia Department of Transportation handles interstates and roads in the surrounding Western Tidewater counties.

VDOT said it has begun pretreating interstates, primary and high volume secondary roads in the Hampton Roads District, with crews gathering material and loading equipment to prepare for the impending winter storms. It also has additional equipment loaded with plows and spreaders on standby. With high winds possible, it also will have crews on standby to assist with downed trees, branches and debris that may fall on roads.

According to VDOT Hampton Roads District maintenance manager William Collier, it has about 250 pieces of equipment at its disposal – state and contractor-owned – to deal with winter weather. He said there are contingency plans to bring in resources from other parts of the state if needed and go elsewhere if needed.

The district extends north to James City County and includes the Eastern Shore, goes into Western Tidewater to Southampton County, Isle of Wight County, Surry County and beyond to Emporia and Interstate 95. It includes more than 160 interstate miles, 730 miles of primary roads, 4,000 miles of secondary roads and 4,700 miles of urban roads.

The agency has seen higher-than-normal vacancy rates, Collier said, and its contractors have been busy with construction work. It means VDOT has to continually recruit for employees and contractors to serve it.

“VDOT and our contractors have faced the same personnel shortages that other people have faced,” Collier said in a December interview, “so we’re making additional contingency plans to share resources more.”

He said VDOT prioritizes routes it serves, and will shift staff around as needed, prioritizing interstates and primary roads first followed by secondary roads and neighborhood streets, with the goal of reaching them within 48 hours after a storm ends.

Crews will be working in shifts as part of 24-hour operations to clear roads. VDOT handles interstates, major state-maintained primary routes and county roads in Hampton Roads, while individual cities maintain their own primary and secondary routes.

District-specific travel alerts and storm information can be found at https://www.virginiadot.org/newsroom/news_from_vdot.asp. The agency said it would be monitoring roads as temperatures and conditions change over the next several days.

It advises people to go to www.511Virginia.org or download the VDOT 511 Virginia Travel app for the latest road conditions, to brake lightly to keep tires from slipping on the road and to have an emergency winter weather kit in vehicles, including water, food, first aid materials, tools and blankets in case of a breakdown or extended stoppage.

People can also call VDOT’s 24-hour customer service center at 800-367-7623 to report road hazards or ask road-related questions, and the agency is on Twitter @VaDOTHR and @511hamptonroads. It has also partnered with Waze to allow people to report, and learn about, unplowed roads in real-time through the app.