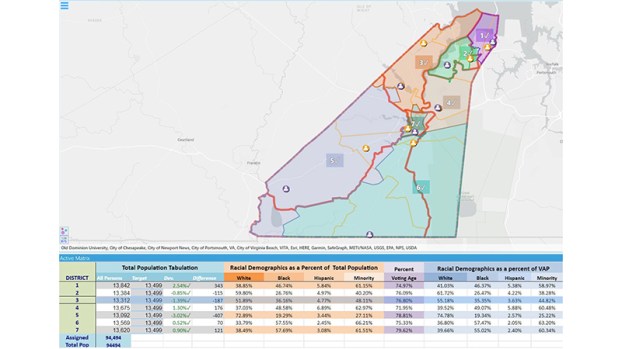 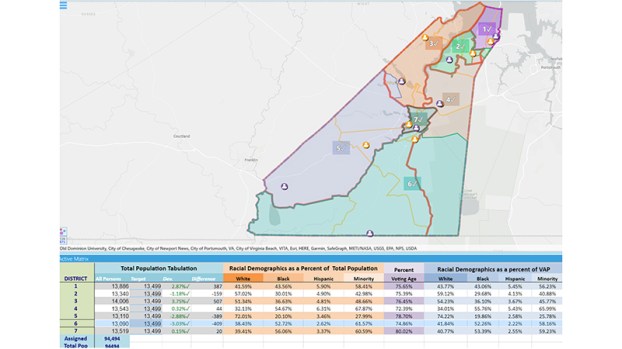 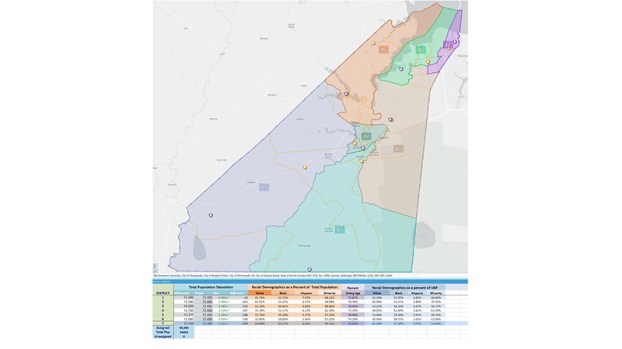 Suffolk City Council members expressed frustration with the lack of detail on boundaries in a new, proposed redistricting map presented to them during a Jan. 19 work session.

Robert Loftin of McGuire Woods, who had provided council with a pair of maps to consider at its Jan. 5 work session, agreed to come up with a third map at the request of Councilman Lue Ward, who provided Loftin with three additional options to review.

Loftin came back with a modified version — dubbed Modified C — that he presented to council, but as happened during the previous work session, council members did not have a street-level view of the maps to determine their exact boundaries and what neighborhoods were shifted into different boroughs.

However, Vice Mayor Leroy Bennett and Sleepy Hole Borough Councilman Roger Fawcett said their respective meetings with Loftin prior to the Jan. 5 work session did yield the street-level detail they were looking for.

Council members also had only had knowledge of the new proposal for two days.

Instead, since members were getting their first public view of the newest proposed map, Loftin pulled up a Google Map view of the Modified C proposal on the monitors in the council chamber and reviewed the boundary changes with each council member.

A concern among council members, including Bennett, was that the new, Modified C map proposal did not clearly outline street addresses or boundaries.

Though they didn’t have a copy of such maps during the work session, Loftin said council members would receive them and they would also be made public when the notice of the Feb. 16 public hearing goes out.

Sleepy Hole Borough councilman Roger Fawcett said he would have liked to have had an overlay of the current and proposed boundaries for each of the three maps.

“This is not, definitively, enough,” Fawcett said. “I’m sitting back here looking at a screen you’re blowing up. But I can’t really see what I want to see, so I really have a problem with looking at a map prior to making a decision on something that I don’t get a clear picture of this. … I don’t want to hang my hat on something that’s going to affect the Sleepy Hole Borough without seeing the entire layout of each one of these maps.”

Fawcett said during the Jan. 5 work session, prior to the Modified C proposal being unveiled, that he favored Proposal 2 because it is “more aligned with what I would think that would be within the boundaries of keeping the demographics, the numbers, the population, and also not chopping the boroughs up to the point where an incumbent could be endangered.”

Council later voted to have all three proposed redistricting maps available for the public to consider during a Feb. 16 public hearing.

Loftin said the population growth in the Nansemond Borough is what’s driving the shift in all of the borough boundaries as part of the redistricting process.

“I will say I think all three proposals in front of you are legally defensible, and I can stand up in a state or federal court and defend them for you if you wanted me to,” Loftin said. “But I feel comfortable defending each of them.”

Council had initially agreed in October to ask for three redistricting maps that prioritize, in order, incumbents of council and the School Board staying in their current boroughs while not splitting up neighborhoods and then keeping census blocks together.

At that time, a majority of council members opted to submit its favored redistricting proposal to the state’s attorney general for pre-clearance. While that does not require a public hearing, council members supported having the option to hold one.

Based on 2020 U.S. Census data, the city’s population is 94,494, counting 170 inmates from Suffolk in the Western Tidewater Regional Jail. That’s up from 84,585 in 2010. With seven boroughs in the city, the target redistricting population for each is 13,499. Loftin said the law notes there will be deviations from a perfect division of population, but should be less than 5% from the target — the smaller the deviation percentage, the better.

The legal requirements for redistricting include boroughs being made up of contiguous and compact territory, providing “as nearly as is practicable, representation in proportion to the population of a district or ward” and having clearly defined and observable boundaries.

Loftin said there is no precise statutory definition of what makes up a contiguous or compact borough, though he noted contiguous generally includes territory across roads and bodies of water, while the goal of a compact district is “to avoid an elongated, twisting or odd-shaped district” in the event other criteria are not met, “such as one-person, one-vote or racial fairness,” he said.

Principles governing redistricting include: using the most recent census for determining borough populations; boroughs need to be drawn to give racial and language minorities an equal opportunity to participate in the political process without lessening their ability to elect candidates of choice either alone or in a coalition with others; and boroughs cannot be drawn to have members of a language or racial minority put into boroughs in which they make up “an ineffective minority of voters or are concentrated into districts where they constitute an excessive majority.”

Also, boroughs can be invalidated by courts for violating the Equal Protection Clause if they cannot be explained for reasons other than race. A borough can be an unconstitutional racial gerrymander if race was the predominant factor in drawing borough boundaries, and while boroughs can be drawn to ensure incumbents retain residency in the district, the redrawn boundary must be compact and contiguous.