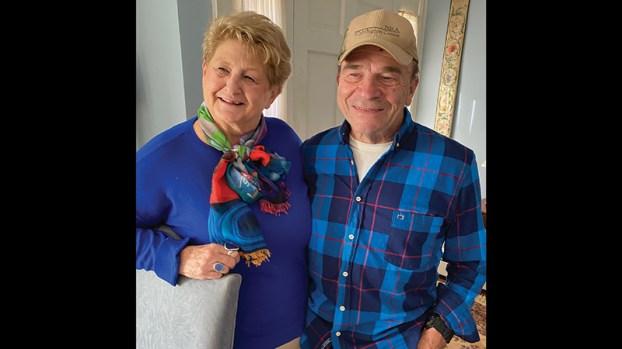 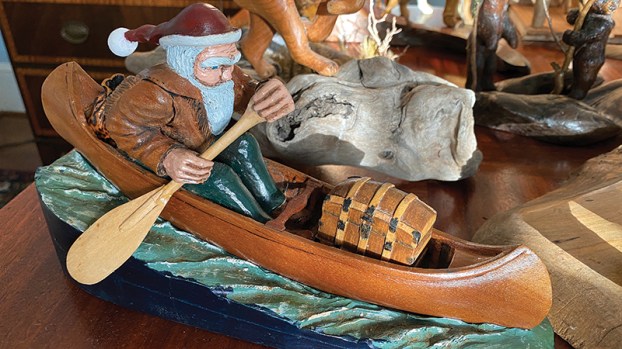 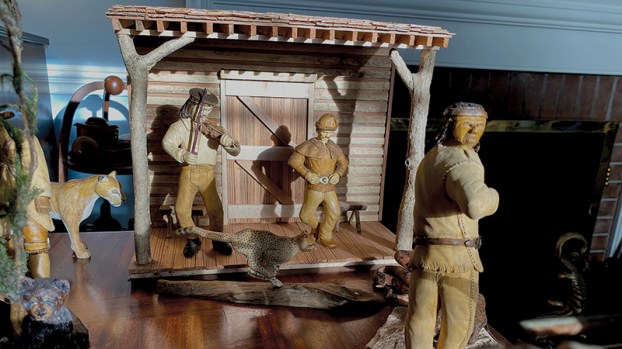 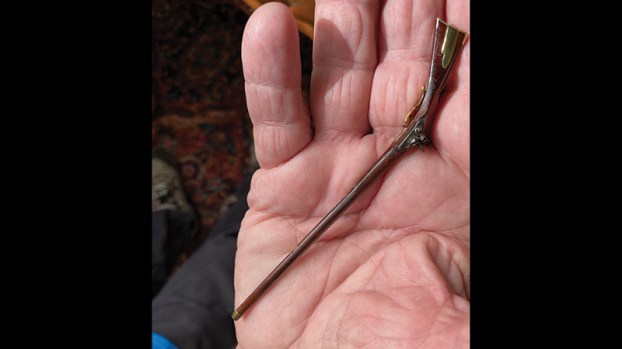 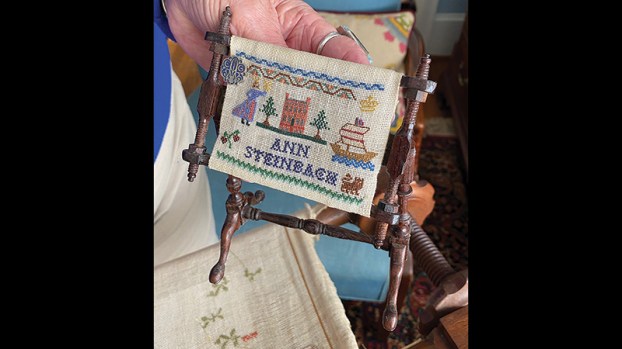 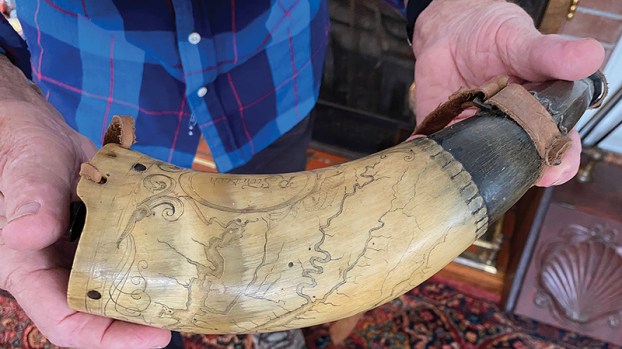 Roger Steinbach shows off an engraved powder horn made from a cow’s horn. 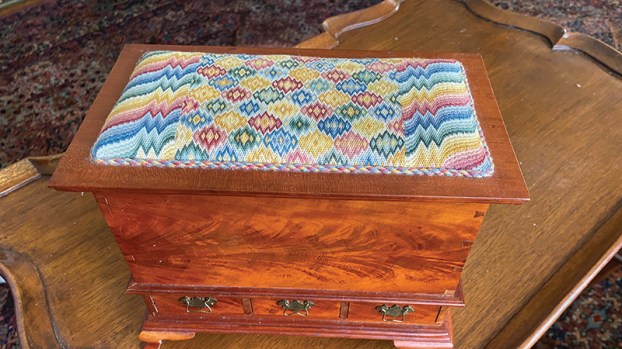 Couple combines their love of art

An aura of creativity seems to shine around Ann and Roger Steinbach as they talk about the art pieces that fill their Suffolk home and their hearts.

For 55 years, the Steinbachs have each followed their own creative muse in wood carving and fine needlework but occasionally combine their talents in unique pieces.
It’s all in the details — from tiny miniatures to full-size décor pieces and functional furniture, the detail in their work leans more toward fine art than arts and crafts. A small needlework casket — a dovetailed cherry chest with an impeccably detailed bargello needlepoint lid — is a classic example of their combined artistry.

They each came to their artistry along different paths.

For Roger, it all started in elementary school. During class, he carved pieces of chalk, swiped from the blackboard rail, with his fingernails, creating small figures, usually mummies. At home, he carefully placed the figures into empty matchboxes, coffin-like.

He honed his carving ability then. Now, he said, “they would send me to the school psychologist.”

From chalk mummies he progressed, while still in school, to carving wooden pendants and gear shift knobs.

Considering his family tree, his love of wood and carving could be genetic. His father, George Steinbach, and uncle, George’s brother, quit school to work in a papermill in Tomahawk, Wisconsin, where George occasionally paid his rent with his fine wood carvings.

In 1937, the Steinbach brothers were among the first papermakers recruited by the Camp family to work at their Franklin mill, producing kraft paper. Roger was 8 months old when his mother brought him, two sisters and a basket of kittens on the train from Tomahawk to join his father in Franklin, where Roger grew up.

Roger graduated from Franklin High School in 1955 and attended Admiral Farragut Academy, a prep school then in Toms River, New Jersey, before spending a year at North Carolina State studying paper and pulp technology. Realizing that he was not ready for college, he enlisted in the Navy in 1957. He later returned to North Carolina State for two years to study forestry before working in several different operations at the Franklin Mill.

Ann Steinbach’s roots date back to Jamestown and colonial ancestors who settled in Isle of Wight. She graduated from Smithfield High School and, while she was in the Medical College of Virginia School of Nursing, taught herself a range of needlework styles. She was working at the VA Medical Center in Hampton when she met Roger on a blind date in March 1964.

“I saw that jewelry chest and said to myself, ‘He’s a keeper,’” Ann said.

They married in November 1964, and five years later, moved to their Suffolk home, where they raised their two daughters. Roger remained at the mill until he joined VDOT as an appraiser and estimator. Ann perfected her needlework skills at home before opening Ann’s Cottage of Needlework on Holland Road in 1973. She also wrote and sold 17 cross stitch pattern books.

All along, Roger carved, and Ann stitched, took classes and garnered awards at a variety of craft and art showings. They even traveled to Denmark to study at the Royal Danish Academy of Fine Arts.

Their hearts remain, however, at their home, filled with pieces of their work, where their art remains an integral part of their lives.

Ann has narrowed her focus to samplers, and has created many, including a miniature version that acts as her calling card.

Years ago, Roger sat on the floor of their then-unfurnished living room to hand-carve the curved edging of an 18th-century Providence style tea table now fronting that room’s sofa. He remembers carving the legs, one at a time, under a beach umbrella in Nags Head. From the project’s scraps, he also created a tiny replica of the table — a combination he has repeated for many of his furniture pieces.

About a dozen years ago, Roger began narrowing his focus to miniatures, a perfect reflection of his love of detail — a trait he got, he said, from his father. Each year, he carves a unique Santa for Ann.

“I make Santas with an attitude, “he said. “Some seem to be saying, ‘What, again?!’ and others may be saying ‘I have a headache.’”

His favorite miniature is his 1994 Santa in a canoe with a finely detailed steamer trunk. Hers is a standing Santa with a monkey on a ring.

Among his other miniatures are a palm-sized Kentucky black powder rifle modeled on the full-size, working Kentucky rifle he also built and numerous tiny replicas of the other chests and tables he has crafted over the years.

His miniature figures capture the spirit of an earlier time in figures of mountain men, hunters and wildlife. His days as a sailor show through in his fondness for scrimshaw, and he uses that same technique to replicate the engraved powder horns common to upper New York during the French and Indian Wars of the 1750s.
He carves his miniatures from Tupelo, linden or juniper wood. For his larger pieces, he prefers cherry or walnut.

“For me, carving is therapeutic,” Roger said. “I get an urge to carve and then I have to focus, not think of other things, to avoid making mistakes.”

What would he like to take on that he hasn’t yet?

“I’d like to carve a large figure,” he said. “With all the more details I could put into it.”