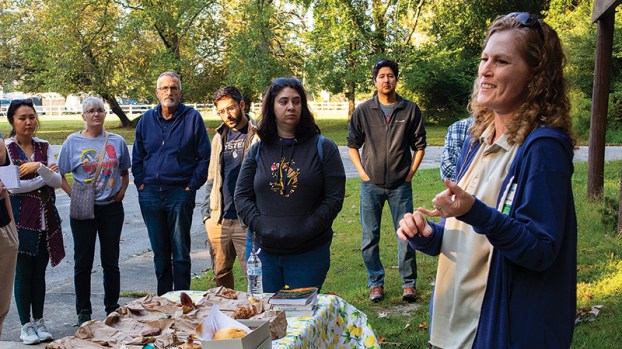 Theresa Augustin, the director of environmental engagement and outreach at Norfolk Botanical Garden, talked about the different kinds of mushrooms that can be found in Sleepy Hole Park and the region during a fall workshop, which drew enthusiasts from Suffolk, Hampton and North Carolina. (Troy Cooper photo) 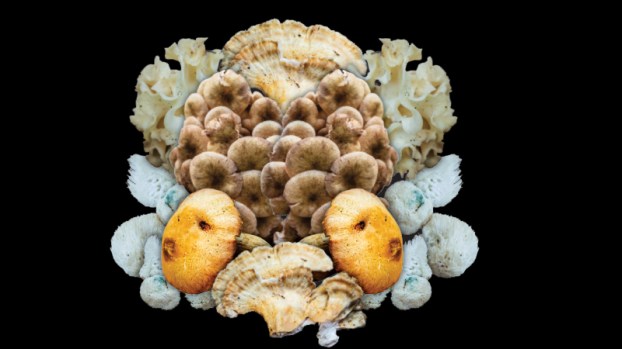 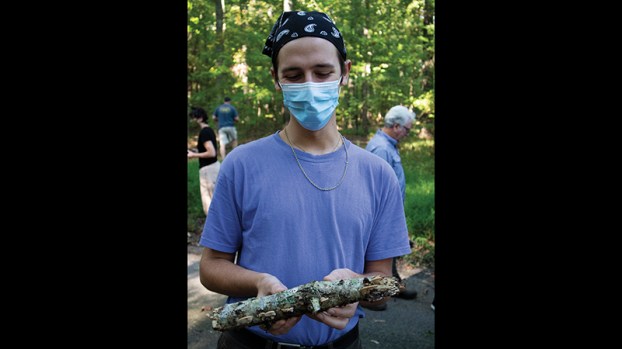 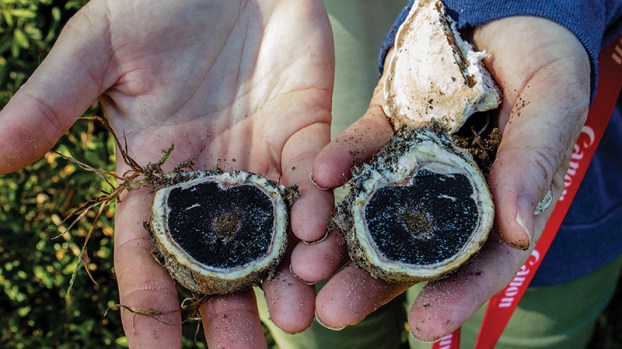 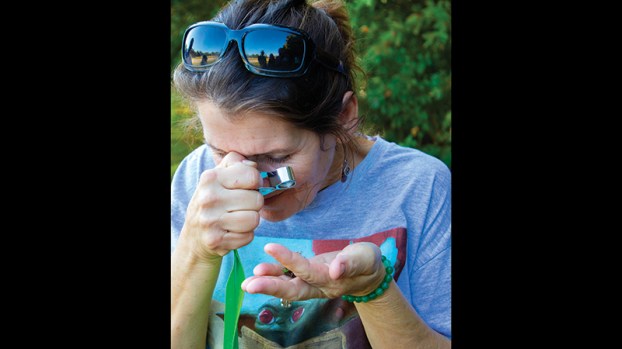 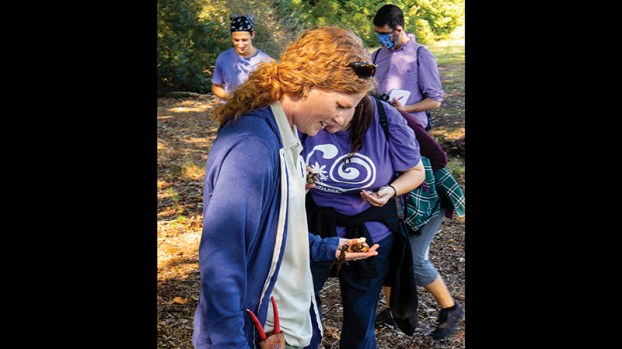 Theresa Augustin, the director of environmental engagement and outreach at Norfolk Botanical Garden, shows off some mushrooms found in Sleepy Hole Park with some of the people who came from Suffolk and the surrounding region for the workshop.(Troy Cooper photo) 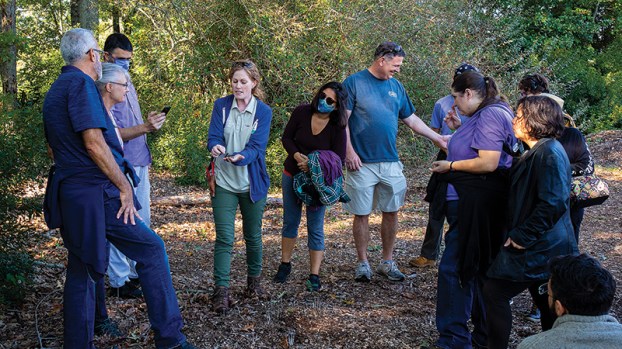 More than two dozen people turned out for a mushroom workshop at Sleepy Hole Park with Theresa Augustin, the director of environmental engagement and outreach at Norfolk Botanical Garden. She talked about the different types of mushrooms that grow in Suffolk and throughout the region and the challenges in identifying them.(Troy Cooper photo)

Mushrooms abound and liven up the ground at Sleepy Hole Park.

And after an avid mushroomer such as Theresa Augustin shows off more than a dozen different types, they suddenly seem like they’re sprouting all over.

Augustin, the director of environmental engagement and outreach at Norfolk Botanical Garden, is a self-avowed mushroom expert and enthusiast. Her curiosity about mushrooms piqued when she was studying at Old Dominion University and she took a class on them. Since then, she’s expanded her knowledge of them and has been taking people on mushroom walks in the gardens for about 20 years.

“The more I learn, the more I share,” she said.

But that doesn’t mean she’ll eat any mushroom she finds.

For starters, she won’t eat any mushroom that isn’t cooked.

More importantly, she has to find out if the mushroom she picks up is even edible. Some edible types can look very similar to ones that are toxic.

“I don’t ever assume something until I’ve ID’d it and I actually look for certain physical features on it,” Augustin said to a group of mushroom enthusiasts during a fall mushroom presentation at the park. “And that’s what I encourage you guys to do. Never take a picture of this and then go out into the woods and be like, ‘but that was on her table. That’s what that is.’ You have to educate yourself, read the books, understand what you’re looking for when it comes to an edible mushroom, or just mushrooms in general.”

That’s a good enough reason to take a spore print of any mushroom found in the field, but that requires patience, as it can take anywhere from 40 minutes to several hours, or even days in some instances, before discerning whether it’s toxic or tasty.

Don’t munch on a hunch.

It’s a phrase she would repeat over the course of about two hours during her presentation and subsequent hike through the park.

“Every mushroom is edible — once,” Augustin quips.

The color of a spore print is unique to that mushroom, she says. She used a honey mushroom as an example — a normal one has a white spore print, while the deadly lookalike’s print color is brown.

“Sometimes when you have those identical twins and you want to just double-check, doing a spore print can be a lifesaver and super helpful in ID’ing,” Augustin says before explaining how to do it this way: “Pop the cap off, sit it on a piece of white paper — you want to use white paper because you can get the true color of the spore. If you use colored paper, it might influence it a little bit.

Some people will use glass so they can put it under a microscope for closer inspection. She advises doing the spore print outside or in a garage due to the “little creatures” that like to live in the mushrooms.

“You may find out how squiggly and wiggly they all are,” Augustin said.

The American composer John Cage had a fascination with mycology and all things mushrooms, and had a brush with how dangerous misidentifying them could be. In 1954, while at the Stony Point artists’ colony in upstate New York, he became sick after eating hellebore, a poisonous mushroom he thought was skunk cabbage.

Though Cage liked to eat mushrooms, even after his poisoning, he shared the common challenge about mushrooms that Augustin and others on the walk run into — being less than sure of what they’re seeing.

“The more you know, the less sure you feel about identifying them,” Cage once said about them. “Each one is itself. Each mushroom is what it is — its own center. It’s useless to pretend to know mushrooms. They escape your erudition.”

Augustin brought paper bags filled with different types of mushrooms foraged in Suffolk. But the walk through the park’s woods was illuminating for the multitude of types of them on trees and in the ground. And participants, including one wearing a mushroom-themed T-shirt, shared her enthusiasm for them.

“Mushrooms are super cool,” Augustin said. “They are actually the fruiting body … of a fungus that lives underground. This is the structure that comes up solely to release the spore so the next generation can start.”

Mushrooms tend to grow in the ground and on trees, and fall is usually the best time to forage them. And better yet, you can pick as many mushrooms as you want and not destroy the fungus.

And once the group got to exploring the park, they found plenty.

There’s nothing sleepy about mushrooms here, especially in their peak season of fall, but they do keep secrets in the underground world in which they grow. The mushrooms we see above ground are just a hint at the secrets that lie beneath.

But we do have evidence of what helps that underground world thrive for them: copious amounts of rain.

Even someone who was dropped into the park and didn’t know what the weather had been like would have been able to discern that it had rained plenty over the previous few weeks.

“No rain, no mushrooms.”

They also have something in common with something much easier to eat when picked.

“Mushrooms are like apples on an apple tree, right? The apple is produced as the reproductive structure to get the seeds disseminated out,” she says. “Same with the mushroom, right? So you can pick apples all day long and the tree is fine. There’s no damage to it (and) it continues to thrive.

“Same with the mushroom. The fungus underground is doing its thing and will not be impacted by you pulling up a mushroom.”

She didn’t dive too deep into the types of mushrooms; rather, she wants people to appreciate and understand them, and provide people with a base layer of understanding if they want to go deeper into identifying mushrooms.

Cage connected his two loves — music and mushrooms — though he joked the only thing the two had in common was their proximity in the dictionary. Though it’s unclear whether anyone in the group during Augustin’s presentation felt like Cage about the fungi, they were clear in their enthusiasm for finding myriad mushrooms all over the lively Sleepy Hole Park ground.

“Often I go into the woods thinking, after all these years, I ought finally to be bored with fungi,” Cage wrote in a diary of his. “But coming upon just any mushroom in good condition, I lose my mind all over again.”