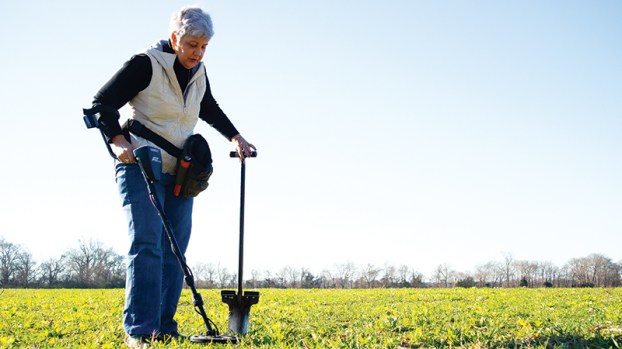 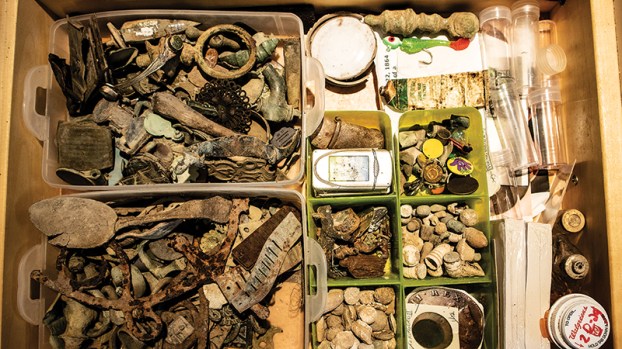 A drawer full of part of her collection — buckles, bullets, harmonica reeds and more.(Troy Cooper photo) 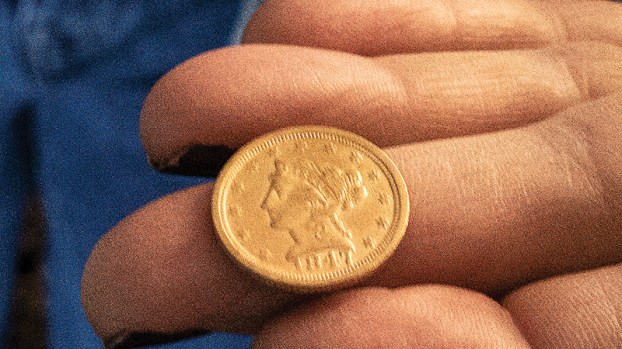 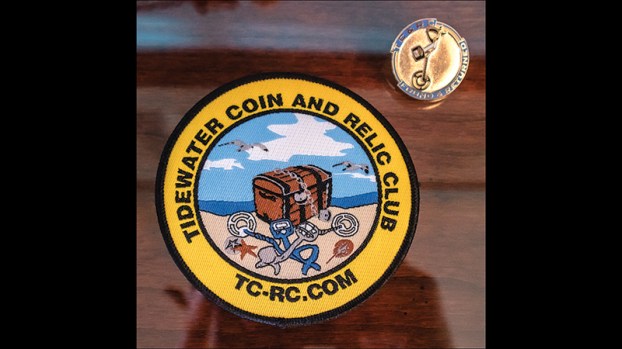 A patch for the Tidewater Coin and Relic Club, a group of metal detectorists to which Ina Finn belongs.(Troy Cooper photo) 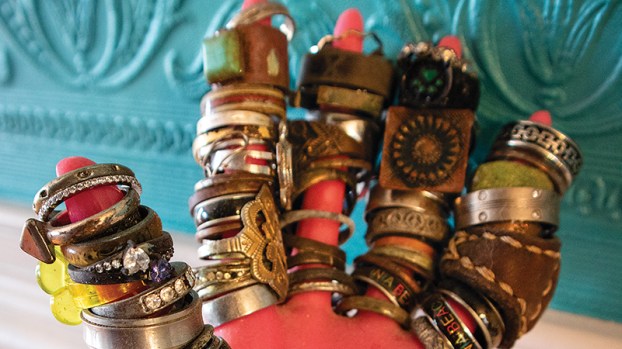 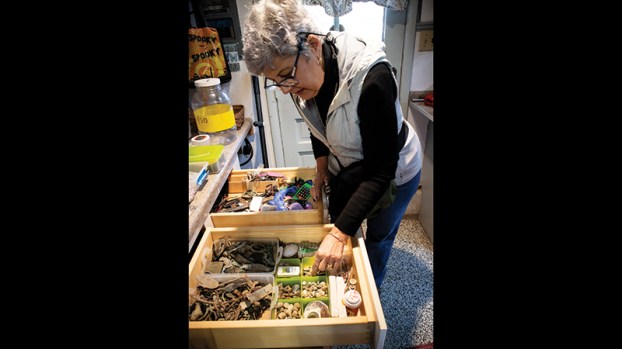 Ina Finn looks through her drawers of finds in her garage. (Troy Cooper photo) 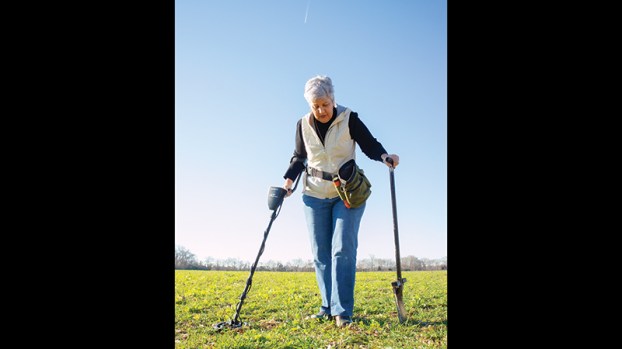 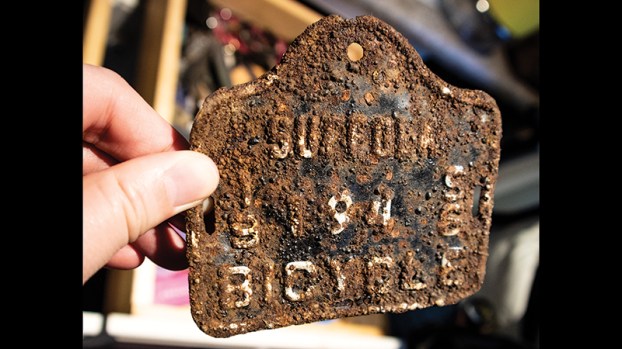 One of her finds was a rusty Suffolk bicycle license.(Troy Cooper photo) 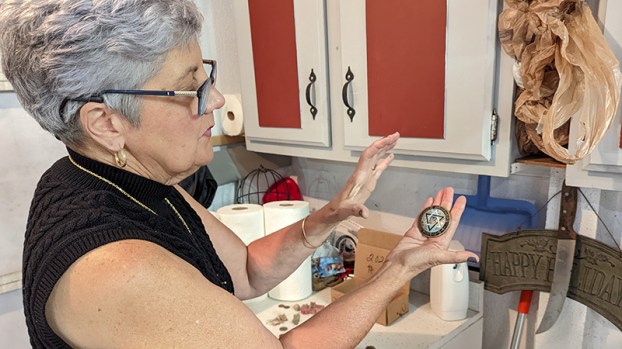 Ina Finn shows off a Dodge Brothers radiator cap that she found while metal detecting in Suffolk.

Metal detector in hand, Ina Finn relishes the solitude of the hunt, scanning fields in search of well, just about anything.

But don’t ask her or any other metal detectorists where they go looking, she explains as she’s showing cobs and cut Spanish reals, both used as currency centuries ago.

“If you look at this, back in the day there would be two bits and four bits, so they would have a coin and they would cut off a chunk of it or something,” Finn says from her home near the former Kings Highway Bridge. “So when you find these, it’s a great day. … I really like all of this because these date from the 1600s to 1700.”

She found those on private property, with the permission of the owner, which she explains can be a long process and difficult to obtain.

On everything she finds, she makes notes of where and when she found each object.

She then shows a gold coin she found – Oct. 28, 2014 was when she found it, owing to her meticulous record-keeping – and, in a rare instance, gets a little more specific as to where she found it.

“I belong to the exclusive gold coin club,” she says as she shows a two-and-a-half dollars gold piece. “When someone says, ‘Where did you find it?’ Everybody’s pat answer is, ‘in the ground.’ But I will tell you I found that in Driver. … two miles down the road, which was a great day.”

A member of the Tidewater Coin and Relic Club, Finn got her start in metal detecting in 2004.

Her mother-in-law had an old metal detector she used at beaches, and, being the curious person she is, tried that out.

Finding a ring she was able to return to someone, she used the reward money from it to upgrade to a different machine.

“That’s what started it all,” Finn says. “And then, of course, joining the club and meeting people. …”

“That’s what cost me a bunch,” Finn’s husband Pat chimes in, laughing, as he overhears his wife in an adjacent room.

She’s continued with the club, having organized hunts for seven years, and she has participated in others across the country.

While she doesn’t hunt for the reward, she doesn’t turn them down when offered, either, and the club recognizes those efforts, too. She has found numerous things she has been able to return to people who had lost them.

And she’s not afraid to get dirty, or wet, in her pursuits.

Finn shares a story of going in the water at Yorktown and finding a boy’s grandmother’s ring, and then another of venturing into the geese-filled, slimy water of a retention pond off of Interstate 264 to find other things.

“When we find a return, we give the club member a recognition,” Finn says. “Also, the person that you’re returning it to, nine out of 10 times will offer a reward. I’m real big on taking the rewards because it’s your time, it’s your effort.”

Being a part of the club allows Finn and the other 40 or so members to share tips and tricks of metal detectoring, and learn something new about the treasures troweled up.

But when they’re out on the hunt, they’ll likely be on their own.

Finn doesn’t go out much with others, particularly when she has received permission to search on private property.

Because setting up such visits can take months to build trust with the property owner, allowing others to accompany her on the hunts can prove problematic. For one, if someone who hunts on a property returns without permission, it erodes the trust earned from the owner. It also has the power to ruin friendships if that person then finds something of note without the person who originally got the permission.

“Those people are called sight-stealers. … It’s private property, with permission,” she says. And you really don’t want to tell anybody. If you take someone, you’re hoping you can trust them enough to not go without you, and to not go without you with taking another person, and another person. Because then, the owner (would be) like, ‘I saw four people, and none of them were you. You were the only one that had permission, and who are these four other people on my property?’”

Finn, though, likes the solitary search.

That, for her, is what she likes best about her hobby, but she also loves to learn about the objects she finds.

On one trip to a field in Suffolk, she found a radiator cap from an old car. On it, it said was the Dodge Brothers emblem from 1917 to 1923. In the same field, she found more than 50 dog tags that said ‘Nansemond County, male’ on them, which she surmised people were likely neutering hunting dogs.

Finn is working on setting up another metal detecting trip on private property off of U.S. Route 58. Setting up such trips can be time-consuming to determine who owns the property, and then making the connections with the owner and getting their permission.

Even if she gets permission, there are no guarantees on what she may find, if anything. But her travails become worth it when she finds something like the Dodge Brothers emblem, the dog tags, or the ring she found in 2008.

Many rings she finds have no particular value, other than to perhaps its previous owner, and she has hundreds of them on a red, mannequin-like hand in her home.

But for one ring she found, after wading waist-deep in water, she took the unusual step, for her, of having it appraised.

The first thing out of her husband’s mouth?

“You’re going to pay for an appraisal just to tell your friends,” she recalls him saying. It’s a story he confirms. “And I said, ‘You’re darn right.’ I knew it was something special, and I did get it appraised.”

The gemologist she took it to would ultimately speak at one of the club’s meetings, explaining what she does and then in detail, describing the stone Finn found – pink tourmaline – with seven diamonds on both sides of the ring.

One of her favorite places to search is on the property of the mid-1800s-era Pennsylvania home her mother grew up in and lived in her entire life.

While her mother sold it in 2000, Finn became close with the new owners – a young family with two children. Over the years, she’s found many things that she has kept – a penknife, a mason jar with the white top, little tin cookie-cutters her sister claimed were hers, broken toy cars, marbles and lots and lots of junk – “because it’s from back home.”

On one such trip, she found a metal item that had an unmistakable connection to her father – on it was his name, address and phone number. It was bent up and likely used for a dog collar, she says, and riveted on leather. She was able to get someone to restore and flatten it.

“The day I found that – my father had a two-car upstair barn and had a brick half-wall there – I sat on there and I just started crying,” she says, still emotional about the find many years later. “I just thought, ‘This was my dad’s. My dad touched this, and how wonderful was it to find something, and how great (that) the people let me detect there. Priceless.”