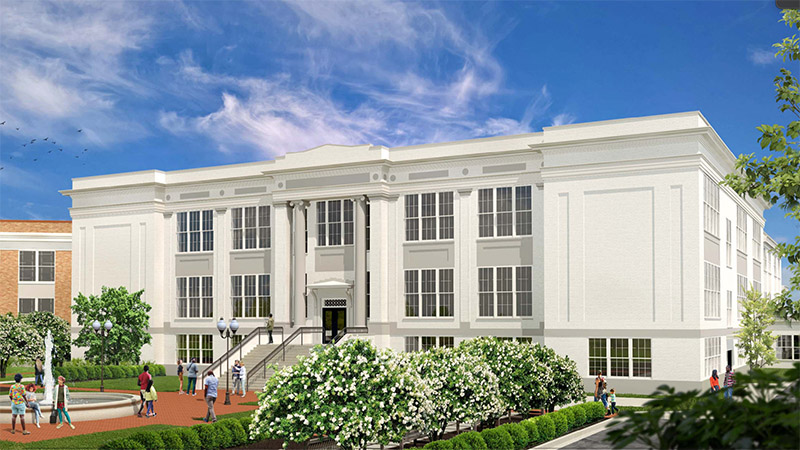 The Historic Landmarks Commission recently rejected the proposed color choice for the Suffolk Center for Cultural Arts, calling it too dramatic a change for the iconic downtown building. (Submitted Image)

Longstanding structural issues at the Suffolk Center for Cultural Arts threaten the health and future of the building and need to be addressed, but it won’t be able to do everything it wants after the Historic Landmarks Commission rejected the proposed color choice for the building, calling it too dramatic a change for the iconic downtown building.

Commissioners voted 6-1 at its Jan. 13 meeting to support the Department of Planning and Community Development’s recommendation to grant a certificate of appropriateness to allow proposed work to replace windows, the supports above them and moldings around the top of the building, but reject the choice of paint. Chairman Oliver Hobbs voted no.

“I have family, I graduated there, my mother did — she was back in the early (19)30s,” said Commissioner Susan Coley. “I think anybody from Suffolk itself is very sentimental to that, and you’re taking away part of what is your memory. There’s got to be a better way of repairing, making better repairs.”

Lorelei Costa Morrow, executive director and CEO of the arts center, spoke during a public hearing of the Historic Landmarks Commission Jan. 13 to get their support for the needed work, which includes addressing leaks and water damage that make part of the 78,600-square-foot structure uninhabitable.

Windows are also falling out in parts of the building and are taped off to keep people from getting hurt.

Costa Morrow said the center started the work about two years ago on fixing up the longstanding issues with the building, which formerly served as the old Suffolk High School. However, COVID-19 delayed those efforts.

It would also paint all brick, columns, cornice, dentil, trim, accent panels and upper parapet with a white opaque protective coating, known as Tnemec paint. The granite tread and risers would not be coated.

Though the staff report supported the work the arts center has proposed for the windows, as well as the wood and metal cornice and dentil sections, it did not support painting over the building, noting that painting unpainted brick is not permitted by Historic District guidelines, and they state that “waterproof, water-repellent or non-historic coatings” should not be used because “they often trap moisture inside the masonry and cause more problems in freeze/thaw cycles.” The building is an anchor to the northwest corner of the Historic District and is highly visible from both West Finney Avenue and North Main Street.

Gerrie West, a principal architect with Dills Architects of Virginia Beach, which is heading up the arts center’s restoration project, said the reason for the coating is to cover up bricks that have been removed and replaced due to previous repairs and are visible on the building’s exterior. The coating would cover up much more of it that they expect to happen when the lintels above every window are replaced.

Also, West said if they reuse the existing brick, assuming it could salvage enough, the mortar is the main visual problem. Getting it to match the existing mortar is nearly impossible, she said, due to the age of the existing mortar. The coating being used, West said, is not a sealer, but is breathable and made for use on old bricks. It allows the moisture from inside the building to penetrate the brick and come back out. She said it is not holding moisture inside the building and allowing it to cause more problems.

Mark Brinkley, president of C.W. Brinkley Inc. Construction of Suffolk, the general contractor for the project, said he was brought in due to the leaking issues. At the time, because it wasn’t able to do all of the work needed, it put in a silicone sealer on the northeast side of the building — the side having “the absolute worst problems,” he said.

“The water was coming in so drastically that we had to do something to slow it down,” Brinkley said. “And over these years, it’s just continued — the sealer has deteriorated and moisture’s been coming in worse and worse.”

He said they would have used a clear coating if one was available that could do the job, but he said the white opaque protective coating would have covered what would have been a brick and mortar that would not have matched.

About five years ago, the arts center asked him what had to be done long-term, and Brinkley pointed to the work he and Dills Architects had done in downtown Norfolk for the 100-year building that housed Crossroads Church, which underwent a similar renovation to what has been proposed for the arts center.

All the windows and doors to the church had been removed and replaced, replaced the lintels and put new flashing in to get the water out. They also used the opaque coating because in many older buildings, Brinkley said, the moisture is designed to go into and through the walls and on the backside, there were furring strips to enable the moisture to come down the backside of the wall and drain out through the ground.

That worked when the building had no air conditioning, but now, when the water comes through, it’s trapped in the wall because the air conditioning draws air into the building, he said. Previously, windows could be opened to dry the walls out. He said that can’t happen, so they must create a barrier to prevent the moisture from getting trapped in the walls. The Tnemec coating doesn’t allow moisture into the wall, but it lets moisture out of it.

Since Tnemec coating has been put on the Norfolk church more than six years ago, Brinkley said they have had no issues with that.

“In my opinion, if we’re going to correct the problem here,” Brinkley said, “and we’re trying to fix the envelope of this building forever, we need to go with the best product out there, and that’s why we chose the Tnemec.”

Several commissioners expressed concern about the choice of color for the building.

Commissioner George Bailey Jr. noted the building’s status as an anchor in the community and said despite his concern about the proposed color change, the commission has been presented with enough evidence that the building’s integrity has deteriorated.

“My only concern … is the overall changing of the color,” Bailey said. “I think (Brinkley) has already mentioned that there’s nothing out there that will preserve the integrity of it, but we see a stark difference in the color from the existing red brick to an all-white exterior.”

Said Commissioner Merritt Draper: “I think that building is the most outstanding building in the city. I think it should be maintained as much as it can in its original color. The original color is brick, but I see here it does not approach that.”

Commissioner Edward King asked why the paint couldn’t be a different color that more approximated the current color of the bricks on the building.

“The paint can be whatever color we want,” Brinkley said. “We could go with red. The problem is that you’re never going to be able to simulate the mortar joints. … because you would have to paint those individually, and I don’t think that would be what you would want.”

King agreed with Brinkley’s point about the mortar joints, but asked whether more than one coat of the clear sealer could be applied.

Brinkley said the clear sealer would last just three to five years before it would have to be reapplied, versus the proposed paint that would last 15 to 20 years, he said.

“You’re still going to have the mismatch of the brick and mortar, where every single window, we’ve got to cut out a section of brick above the windows and doors, and we have to put new flashings in, new lintels and lay that brick back, and you’re going to see that difference between the two mortars. It’s just no way around that. … The Tnemec paint is just so much superior. It’s designed for what we’re using it for. And in my experience, it’s 10 to 1 as far as quality. If we could go with a clear coat that would last and that it would give the protection, I would say that’s what we need to do, but there’s just not one out there.”

Hobbs said he has seen brick buildings painted red in an effort to look like bricks that have turned out awful.

Still, Commissioner Brian Shaffer said he struggled with the loss of detail on the sides of the building no matter what color is used.
“I’m really torn about altering the look of it that dramatically,” Shaffer said.

Costa Morrow said the arts center wants to use the modern technology and materials available to them to ensure its use to support the arts in the Historic District for generations to come. She said the proposal before the commission is vital to continue its work.

“We are proud and honored to be part of the district,” Costa Morrow said. “We want to continue to preserve and use this building and we want to make sure that the perfect is not the enemy of the good in this case.”