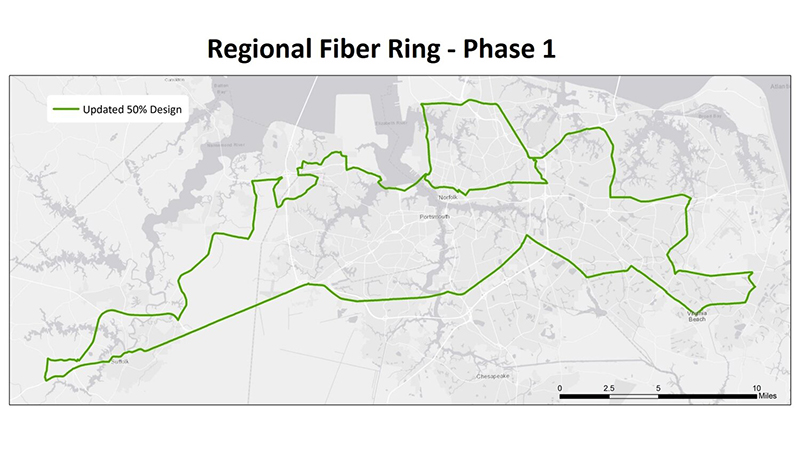 Southside Network Authority members signed a $24.5 million contract Monday with Danella Construction Inc. of Chesapeake to build a 119-mile fiber ring through the five cities of southside Hampton Roads - 35 miles of it in Suffolk.

The move, two years in the making, will further push the city toward universal broadband access for residents as recent initiatives set to increase capacity in the next few years move forward. Construction is expected to begin by the middle of the year, with completion scheduled for sometime in 2023.

As part of the agreement, it authorizes council’s appointee to the board of directors, Moor, to buy up to five shares in the project on behalf of the city as part of the cost-sharing agreement of the project. Council approved the resolution at its Jan. 5 meeting.

When complete, the network ring will connect transatlantic subsea cables to the cities of Virginia Beach, Chesapeake, Norfolk, Portsmouth and Suffolk. The timeline for construction is pending a notice to proceed, Moor said.

Those cities formed the authority in 2019 to increase the availability, connectivity and speed of broadband service of South Hampton Roads.

Authority executive director Steven DeBerry said one of the goals of the authority is to lower broadband costs, while making the quality of it better.

The fiber ring is 119 miles in length — 35 miles of it in Suffolk — extending in a loop from Virginia Beach to Suffolk.

“We revised the design to include some of the prime economic development areas in Suffolk,” DeBerry said, “and also extended the line through Paul D. Camp Community College. It does a number of things, including meeting economic development objectives and also connecting higher education. And as the ring expands into the western part toward Franklin, Southampton County, Isle of Wight in future years, it positions us well to transition to that area.”

Initially, DeBerry said the authority was unsure where it would find the money for it. Working with its consultant in the five cities, it took a dual-path strategy — securing bids to build the fiber ring assuming it would get money from grants, the participating cities or a combination of both. And, not knowing whether it would get the money, it put out a request for proposal seeking a private partnership to build and operate the fiber ring.

He said everything came together in November, and at the authority’s Nov. 12 meeting, because federal American Rescue Plan Act money and other money became available, it recommended working with the cities to finance and award the construction of the fiber ring, which it had budgeted $23 million, but it got bids below that amount, including the just under $18 million bid from Cox Communications, allowing the authority some wiggle room for change orders and other technology it wants in the project. In November, the authority agreed to issue a notice of intent to award the contract to Cox and a second to Danella Construction as a backup. Danella had the second-lowest bid at $24.5 million.

“As often happens, you come to a hybrid solution,” DeBerry said. “The decision was to fund the construction of the ring, which is a capital cost, but we also agreed to enter into a (P3) arrangement with one of the responders because they presented a very compelling program for managing the fiber. We wanted to reduce overhead, or not grow overhead, for the Southside Network Authority, so it makes sense to partner with experts in the field to run this fiber ring for us in the future.”

The authority is expected to approve a Phase II contract with Columbia Telecommunications Corporation for construction oversight. The company has provided all of the authority’s design support to date.

In February, the authority plans to negotiate with Global Technical Systems, the public-private partner the authority will be working with.

“We’ll be talking to them about how to actually expand the fiber ring at their expense based on customer input and potential expansion,” DeBerry said. “They would run the fiber ring and we would share revenue, and those things are to be worked out as we move forward.”

Mike Lockaby, a lawyer with the authority, said it is using a cost-sharing model its board approved allowing for an initial offering to sell shares in the project to each of the five participating cities.

“The idea was to have a model that was flexible, equitable and that was repeatable,” Lockaby said.

The need for flexibility, he said, was due to differing needs among the cities, mainly in how much money each planned to commit to the fiber ring.

While not offering specific amounts for each city, he said they have expressed a willingness to commit anywhere from $3 million to $7 million in the project. It is asking each city for $5 million, because with $25 million, “we can say with a fair degree of certainty that we will have enough money to complete the project even with some contingencies built-in.”

That’s why the authority wanted to offer cities flexibility to buy in at different levels as their cities’ budgets allowed. They can buy what the authority is calling shares — or an equity stake — in the project in exchange for a share of control.

But it said the amount of money each city puts up would equate to the level of control each would have over decisions made about the project, and how it is built, maintained and marketed.

Each city, DeBerry said, must buy in for at least $2 million — equating to eight shares. If a locality buys in at $2 million, it will get one strand-pair of fiber, “which is a little bit marginal to run a city of this size and certainly would not be expandable.” At $5 million, a city would get three strand-pairs, which he said would be more than enough while allowing for future expansion.

Lockaby also said that since the project was originally conceived to cover much of the 17 localities that make up the Hampton Roads Planning District Commission, under which the authority was created, it wanted the structure of the agreement to be repeatable should other localities wish to enter into their own agreements under the authority’s umbrella.

Councilman Donald Goldberg said his support has only grown since he learned about it.

“I like it a lot,” Goldberg said. “I very much support it. I think it’s important for our community that we have it and take advantage of it.”

Mayor Mike Duman said the fiber ring project is welcome news. He stressed that the city itself is not providing broadband service through the fiber ring, but is allowing other providers to “plug into” the broadband and provide service to the community. The providers, in turn, would pay a fee, and that will go to the authority for operational costs. If there’s a profit, then the city will get a return on its investment while residents get service.

And though the $25 million covers the construction cost, it doesn’t cover the operational costs. DeBerry said, in response to a question from Duman, that there could be additional operational costs that may not be offset by revenue. Those costs are expected to be $750,000 per year. He noted that projections in what the city would give to a broadband provider to provide the same service, “in order to have your breakeven for the amount that you would have to put in to be one-fifth, or whatever of that $750,000 would be what you’re already paying, plus we’d have to find somebody who will pay us a few thousand dollars a month, that’s it, in order for it to break even.”

Duman wanted to make sure the city wouldn’t face additional liability down the road.

DeBerry said if somehow things went downhill and the authority was operating at a deficit, the city would take a potential hit of, at most, $200,000 that it would know about well ahead of forming its yearly budget.

The mayor said, that when combined with the $21.1 million coming to the city, Isle of Wight County and Southampton County as part of the recently announced Virginia Telecommunication Initiative grant program, in a joint effort from the three localities, the Hampton Roads Planning District Commission and Charter Communications, it checks off a major city initiative. Charter indicated through the VATI application that it is interested in partnering with the authority to leverage its network.

The city is also working to set up a partnership with Dominion Energy to help with obtaining permits or meeting any of the utility’s requirements.

Edinburg-based Shentel will also be adding to the city’s broadband portfolio, as council has approved a three-year right-of-way licensing agreement to allow it to operate and install its GloFiber broadband network in the city.

The city outlined plans last summer to spend $8 million in federal ARPA money to improve broadband infrastructure in the city — $5 million for the authority’s regional fiber ring and $3 million as part of its contribution to the VATI application.

Duman praised the localities and the authority for coming together on the fiber ring. He said being able to provide universal broadband and do it with little to no net fiscal impact to the city is huge for the city.

“When you combine this with our VATI grant and this regional broadband coming to fruition,” Duman said, “if I’m not mistaken, we’re basically talking about, within the next two years, probably, having universal access in a city of 430 square miles.”