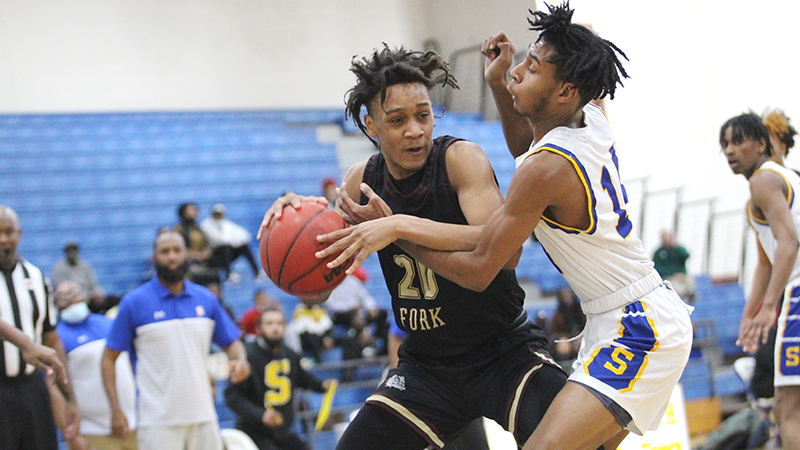 Bulldog Daron Jackson keeps the ball away from an Oscar Smith High School defender during King’s Fork’s 10th win of the season on Jan. 18.

The King’s Fork Bulldogs boys basketball team is off to a riveting start to its 2021-22 campaign. That includes a recently grueling stretch of four games in five days, where they posted victories over some of the better squads across the Hampton Roads area.

On Jan. 18, the Bulldogs traveled to Chesapeake and won a close battle with the host Oscar Smith Tigers, 53-48, to improve to 10-0 overall.

“We both were running on fumes. We play these games and in late February, March, you’ll look back on it and say you were able to get through them,” said King’s Fork head coach Rick Hite. “Our guys just made one or two more plays tonight.”

In the early going, King’s Fork built a 10-point lead as the Tigers struggled to find the touch from the field, misfiring on 12 of their first 15 shots. By halftime though, Oscar Smith had chipped away enough to get within six, trailing just 28-22, as the Bulldogs attempted only one free throw.

“The first half, I felt they were more aggressive. They came out in zone, got into our bodies and we wilted a little bit,” Hite added. “We discussed it at halftime. We got back to playing attacking basketball. I thought we put the pressure on them in the second half and were able to match their energy with our aggression.”

Even when Oscar Smith nudged in front, 36-34, late in the third quarter, the Bulldogs didn’t blink or let fatigue derail them. Six-foot-4 senior guard George Beale came to the rescue, pouring in nine of his game-high 23 points in the fourth period.

It was nothing new for Beale, a Long Island University commit who has been putting up stellar numbers all season long.

“These last few games, we knew there was a lot on us and our bodies,” said Beale, fresh off a 34-point, 15-rebound effort against private school power Cape Henry in the Bob Dandridge MLK Classic held at Norfolk State University.

“Getting out on a college floor and that atmosphere, it felt good. I was feeling it that night.”

Beale opened the fourth quarter with his team’s first six points and they didn’t relinquish the lead from there.

“That’s what closers do,” Hite said of Beale. “If you want to play college basketball, you’ve been here four years, that’s your time. That’s kind of how you build your legacy, in the fourth quarter. … G steps up for us.”

Beale didn’t go at it alone, though. He got some help, mainly from the likes of 6-foot-4 senior forwards Daron Jackson and Jayden Pettes as well as 6-foot-3 junior guard Ryan Hite. Those three combined for 20 rebounds and helped bring a physical edge in crucial moments.

Being labeled the area’s top team doesn’t faze the upperclassmen on the King’s Fork roster. In fact, they welcome the challenge.

“We embrace it,” said Jackson, their second-leading scorer with 12 points on the night. “We’re always going to have a target on our back. That’s just us. That’s King’s Fork. You’ve just got to lock in and be ready.”

Jackson’s offensive rebound, followed by two free throws, gave the Bulldogs a five-point cushion with 23.2 seconds remaining that made for the final margin.

While some may view the 2019-20 King’s Fork team that won a share of the VHSL Class 4 state title as a more talented group than this one, these Bulldogs have already gone longer without suffering a loss. Time will tell if they can go undefeated or not, but in spite of finishing well below their normal scoring average of 74 points per game, they found another way to keep the streak going.

“I’m sure it’s in the back of our minds,” Hite acknowledged of the undefeated run. “But I’m a big believer in competing possessions. At the end of the quarter, end of the game, end of the season, you say, ‘Hey, we put together a pretty good streak.’ Our practices look just like that game. If we defend, we give ourselves a chance to win every night. And we’ve been doing that.”

The Bulldogs also won on Jan. 25 over Great Bridge 69-31 behind George Beale’s 28 points, 10 rebounds and five steals to improve to 11-0 overall. They were set to host Indian River on Thursday, but the game began after press deadline for this edition.