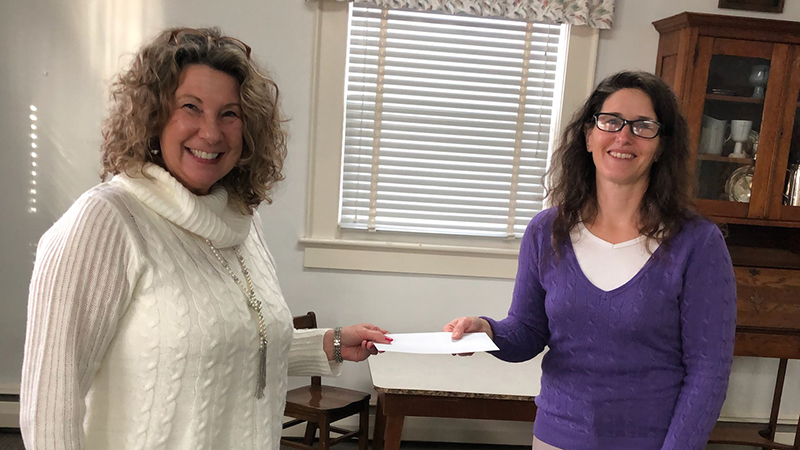 The Rev. Lisa Meyers presented a missions donation to Amy Henry for The Genieve Shelter from the proceeds of the Providence United Methodist Church Fall Bazaar.

After holding another successful fall bazaar, Providence United Methodist Church donated a portion of the proceeds to the Genieve Shelter.

For close to 50 years, Providence United Methodist Church has held its fall bazaar. At this bazaar, folks could get delicious goodies such as fresh country sausage, Brunswick stew and different homemade baked goods. Guests could also shop in the “Hidden Treasures” tent full of various antiques and furniture. Last year, the event also served as a social gathering, as many people had not had the chance to catch up with their neighbors during the pandemic.

As folks look through the unique items for sale and catch up with friends, they can shop knowing their money is going to a good cause. After the event, the church looks at the proceeds from selling these goods and donates a portion to a local charity or organization.

“We wanted to give to a local organization that gives back to the community, because the community supports us,” said Barbara Veltri, an organizer of the bazaar.

For this year’s mission’s donation, the church voted to donate to the Genieve Shelter, which provides a safe house for those experiencing domestic violence, sexual assault, stalking or human trafficking in the cities of Suffolk and Franklin, the Town of Smithfield and the counties of Isle of Wight, Southampton and Surry. Despite the pandemic, the shelter has done its best to provide services to those who need them during this challenging time.

On Jan.13, Providence United Methodist Church invited Amy Henry of the Genieve Shelter to receive the check. The Rev. Lisa Meyers presented the donation on behalf of the congregation, who made the gift possible.

“We felt so blessed to have a profit that we could share,” said Veltri. “There’s a feeling of grace being able to share that. Being a small church, it takes the whole congregation to put on a bazaar like this, and it’s a blessing to have profits to share.”