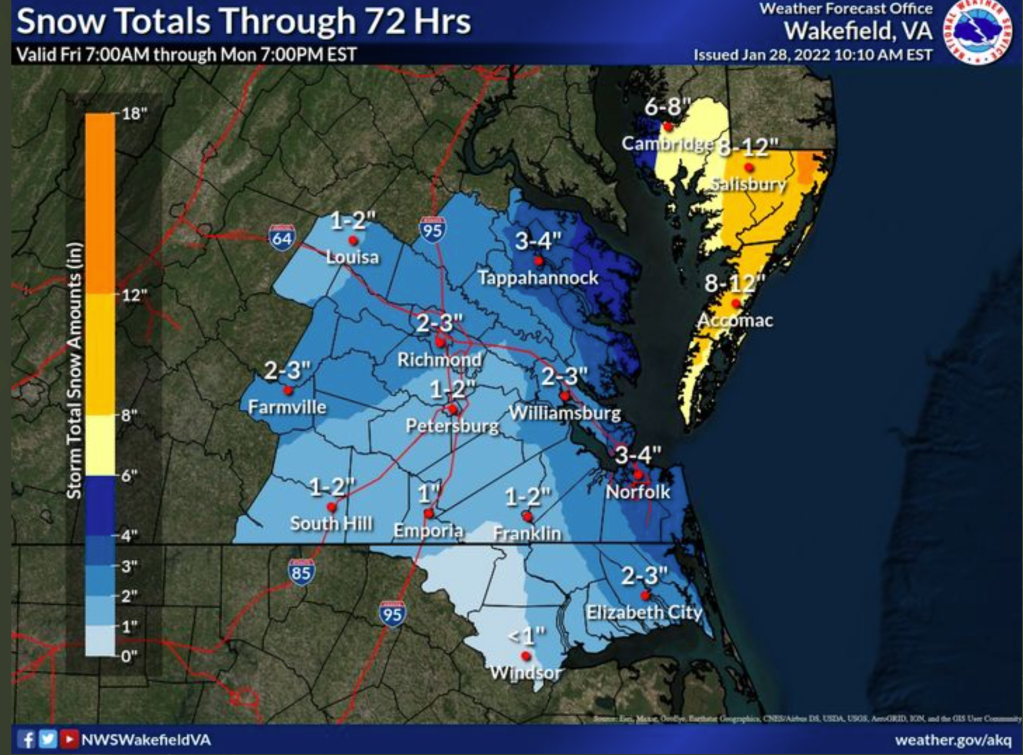 The National Weather Service office in Wakefield says Suffolk can expect anywhere from one to three inches of snow from a winter storm Friday evening and Saturday.

Note: This story has been updated to include updated weather information and city facility closures Saturday, along with information on storm preparations by the Virginia Department of Transportation, contact information for power companies and the cancelation of extracurricular activities Saturday for Suffolk Public Schools.

A winter storm riding up the Atlantic coast may not have the impact forecasted earlier, but officials caution it can still bring with it treacherous road conditions and minor tidal flooding to Suffolk.

The National Weather Service has downgraded the winter storm watch for Suffolk to a winter weather advisory, effective from 10 p.m. Friday evening through 4 p.m. Saturday. A winter storm warning is in effect for the most eastern parts of Hampton Roads and northeastern North Carolina, while a blizzard warning is in effect for Accomack and Northampton counties on the Eastern Shore of Virginia. 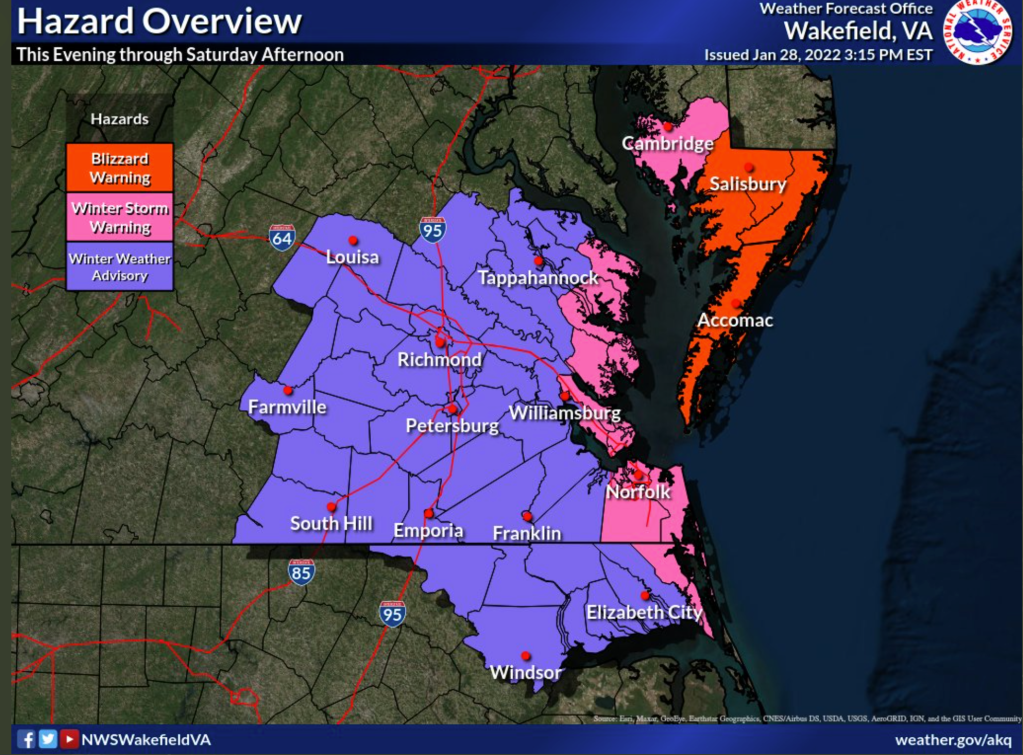 For the city, it means a 40% chance of rain mainly after 4 p.m. before it switches over to snow. Suffolk could still receive one to two inches of snow Friday evening with possibly another inch of snow before 7 a.m. possible.

The chance of precipitation is 80% this evening and 60% Saturday. The forecasted temperature Saturday will be at its lowest all season – 12 degrees – before Sunday reaches about 38 degrees.

The city has a 40% to 70% chance of at least two inches of snow, according to the National Weather Service’s Wakefield office. 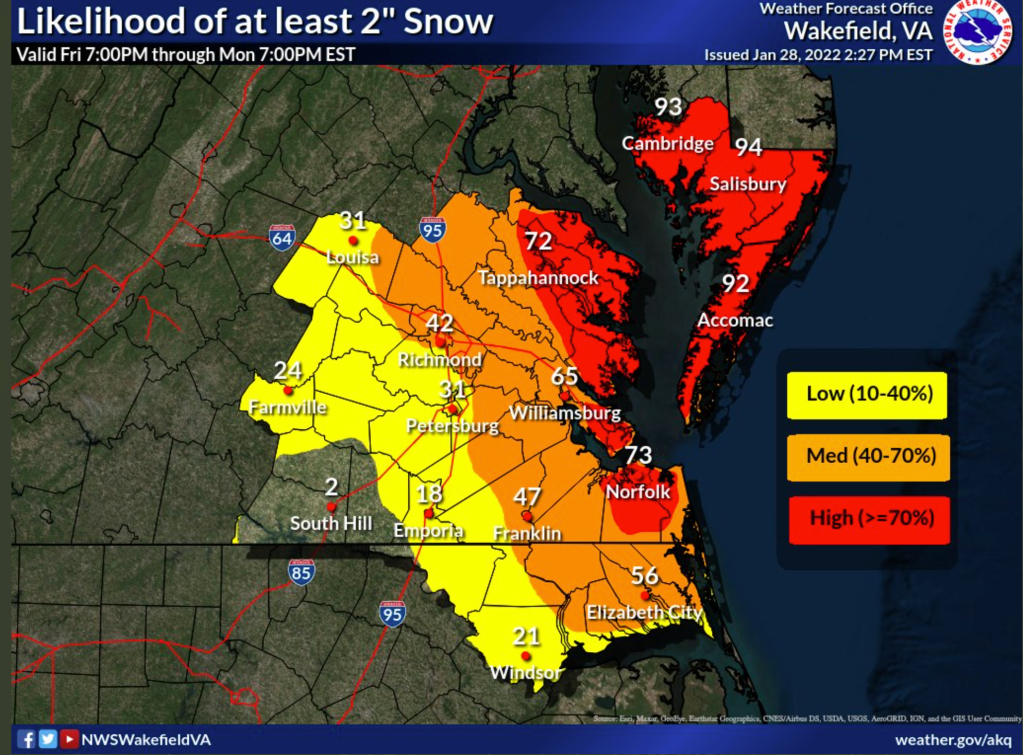 The city advises that the forecasted winter weather could result in slippery road conditions, with minor tidal flooding expected Saturday morning that could impact the Kimberly Bridge area on North Main Street.

Suffolk’s Office of Emergency Management and city staff are monitoring the forecasts due to their variability in the snow predictions and the potential for freezing with temperatures falling below freezing and possible single-digit wind chills.

The city’s Department of Public Works will have a lead eight-hour shift for crews from 4 p.m. to midnight, with crews then beginning 12-hour shifts to plow or treat roads, if needed, and will continue through the end of the winter weather. It has been pretreating roads with sand and abrasives, as other materials will wash away due to the expected rain ahead of the snow.

Once the snow starts, city crews will spread salt and sand to get a base layer on the roads under the snow, and those roads will be the priority for crews to clear once the snow passes, with neighborhood streets cleared last.

The pre-treating of roads is taking place on the city’s primary and most significant collector roads.

Suffolk Fire & Rescue and Suffolk Police are preparing for service calls related to the weather, in addition to their regular calls.

City, state and other officials are calling on people not to drive during and after the snow, and to avoid all non-essential travel.

“If you are able to, please stay home and off of the roads,” said Holly Dalby, AAA Tidewater director of public affairs, in a statement. “Make those trips to the grocery store before the weather comes so you can stay at home once it starts precipitating.”

If driving, people should pay particular attention to bridges and passes, as they likely will freeze before the roads, and they should give room to snow plows and avoid passing them due to snow or abrasives coming from the operating plow. Drivers should also avoid driving in front of one as it will not be able to stop easily.

The city has an interactive map of its priority routes for its public paved roads at www.suffolkva.us/winterprep. Removal timeframes and priorities can change with weather conditions. It will also provide updates if there are any changes to its operating status for city facilities over the weekend.

To report road issues in Suffolk, contact Public Works at 757-514-7600 24 hours a day during and after the storm until normal operations resume. For after-hours requests for emergency Public Utilities services, such as broken water pipes, call 757-514-7000.

The Virginia Department of Transportation has shifted extra resources to the Eastern Shore in anticipation of it receiving higher amounts of snow, with 325 trucks with plows and spreaders at its disposal. By Friday morning, it had put down about 60,000 gallons of brine on interstates and primary roads in the Hampton Roads region.

Residents are asked to avoid parking on streets where snow or ice is predicted, and to shovel sidewalks as soon as possible after a storm – but to avoid shoveling snow into the road. Snow should also be cleared from fire hydrants.

Residents can get information on road conditions from the Virginia Department of Transportation at www.511virginia.org, the VDOT 511 Virginia Traffic app or they can call 511. They can also follow @VaDOTHR and @511hamptonroads on Twitter. The Waze app also allows users to report where roads have not been plowed during a winter weather event. Road hazards can be reported to 800-367-7623.

The Interstate 64 express lanes will be closed beginning at 6 p.m. Friday through 5 a.m. Jan. 31 to allow for snow removal operations.

Gov. Glenn Youngkin has declared a state of emergency in anticipation of the winter storm. 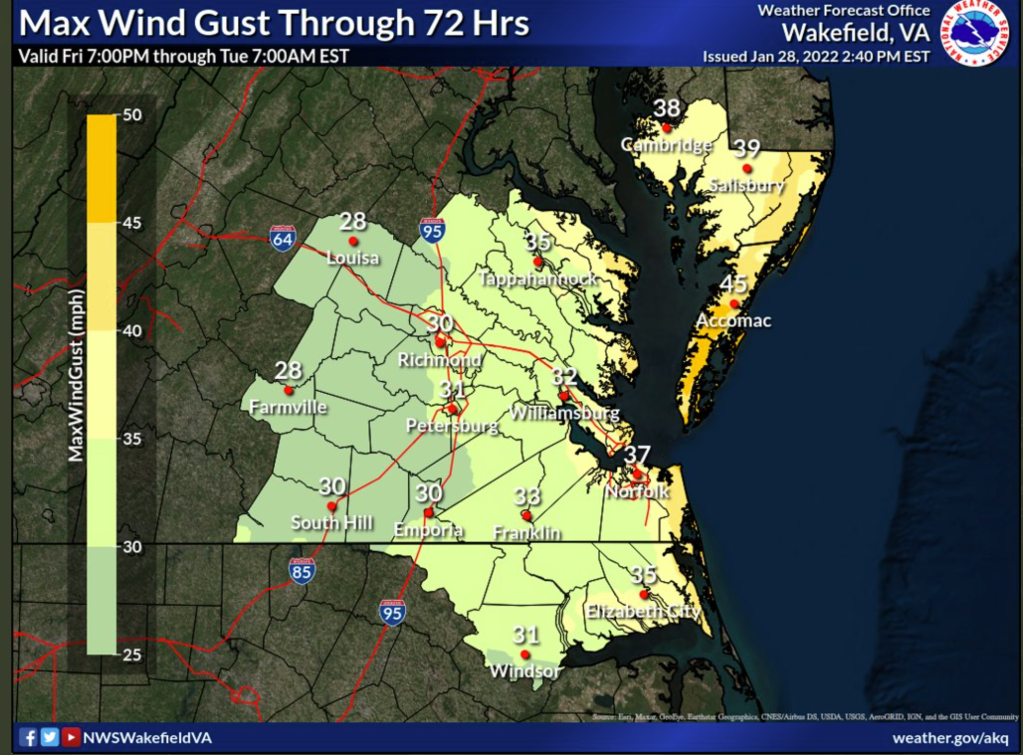 City facilities will be closed on Saturday due to the expected impact of winter weather Friday evening and Saturday.

Suffolk Transit will continue to operate Saturday. However, operations could change based on the safety of road conditions, at which time, a further update would be released.

Suffolk Public Schools has also canceled all extracurricular activities Saturday. SPS students are off Monday for a teacher workday.

City staff encourage motorists to stay off the roads after the onset of winter weather conditions and limit travel to necessary trips. A city-produced public service announcement offering winter driving safety tips can be viewed at https://youtu.be/b_EZ7FTsOeE.