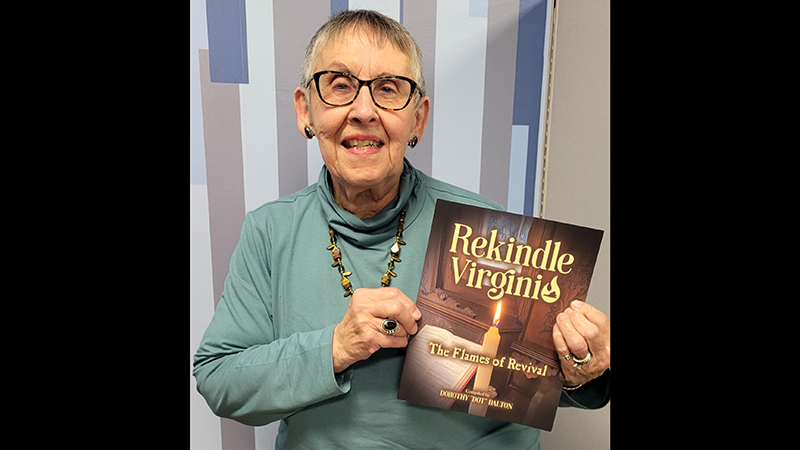 Dot Dalton released her new book “Rekindle Virginia: The Flames of Revival,” which covers Virginia’s part in the Great Revivals.

A new book by a local author shows a side of the commonwealth’s history that is not often discussed.

This book follows the evangelistic revival journey of Virginia dating back to its start in England. This book is a compilation of notes and research Dalton did on the history of Christianity coming to America and its growth. She studied the reasons behind the first charter in 1606 and the settlement at Jamestown before looking into the Great Awakenings.

Between the years of 1720 and 1789,  the Great Awakening made its way across Virginia with Presbyterian, Methodist, Anglican, Lutheran and Baptist churches taking part. Then, Jonathan Edwards started the Second Great Awakening in New England before making its way down to Virginia, where great revivals happened in the church.

“I want people to know the true spiritual history of Virginia,” said Dalton. “I want it to awaken our excitement for what God did and what He is going to do.”

The book includes historical accounts, graphs and pictures, making the book an easy read for those interested. The last chapter is an application for individuals as well as the church.

Dalton has been involved in the Suffolk community for many years, as she has organized IMPACT SUFFOLK, “March for Jesus” rallies, Summer Slam for Youth and the “Heaven’s Gates & Hell’s Flames” city-wide play. This past October, she organized the Rekindle Virginia Tent Revival along with many churches in Suffolk and surrounding areas. Knowing that Virginia was “God’s Eastern Gate to America,” she wants to focus on Hampton Roads as she talks to local groups to pray for what’s next.

“God always prepares His people for what’s ahead,” said Dalton. “The church, which I believe is not a building but the Body of Christ, needs to come alive and unite knowing that there is power in the gospel.”

“Rekindle Virginia: The Flames of Revival” is available on Amazon, Barnes and Noble and rekindleva.com.