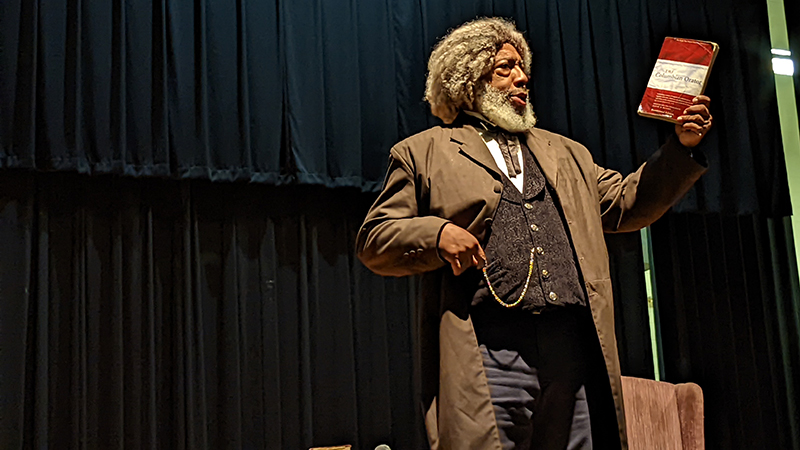 Frederick Douglass came back to life for Lakeland High School students Tuesday as Suffolk poet, author and spoken-word performer Nathan Richardson stepped into character for an hour on the auditorium stage.

For that time, Richardson, a 1978 graduate of Forest Glen High School and jokingly referring to Lakeland as “Rangers 2.0” in reference to his old high school’s nickname, captivated a socially-distanced audience as he wove “first-hand” stories of Douglass, a former slave and abolitionist born around 1818 in Talbot County on the Maryland Eastern Shore. He said the closest slaves could know the date of their birth was to identify it against the backdrop of planting time, or harvest time.

“You see, the slavemasters did not want you to have any knowledge whatsoever,” he said. “An educated slave would be a worthless slave.”

Lakeland history teacher India Meissel, in kicking off the school’s Black History Month events, prepared students for what they were to see by briefly sharing the background of Douglass’ life and his significance.

“Take yourself back in history,” Meissel said, “and we’re going to meet one of those people who really shaped … a lot of our history. From being a participant in the Seneca Falls Convention for women’s suffrage as a supporter to working with, and not, and I repeat, not debating Abraham Lincoln during the American Civil War, Frederick Douglass is a milestone human that is woven into our historical tapestry.”

From the moment he stepped on stage as Douglass, Richardson took students back to the time when Douglass was living his experience, noting at the start that instead of COVID-19, one of the pandemics of his time was yellow fever.

In character, he noted an introduction Douglass once received from John A. Collins at the Anti-Slavery Society in Massachusetts: “He is a graduate of the peculiar institution of slavery with his diploma written on his back. Well, hopefully, you won’t have to work that hard to get your diploma, but you should do everything you can to matriculate from this school and college and make something of yourself.”

He also noted, in Douglass’ character, that “if you are going through anything in this modern era, you might want to consult history to find out if it serves the present or the past, and your future.”

Douglass “told” the students that he didn’t identify as a slave, but rather as a human being “in the unfortunate career as a slave. I found out it didn’t pay well, so I escaped to find a career that did pay. And in my case, I became an orator, a writer, a newspaper publisher and such.”

Richardson, noting Douglass taught himself how to read and write, and noting his own 22-year service in the Army, called on students to respect their potential, even having them repeat the phrase, “respect your potential.” On several occasions, he called on students to participate with him as Douglass, including some who identified themselves as writers of poetry.

“I just grew up in Buckhorn with a family of storytellers and I was a kid listening, and I became a poet, and reciting poetry,” Richardson said, “no idea that I was going to become Frederick Douglass, but one thing I did know, I respected my potential to be something.”