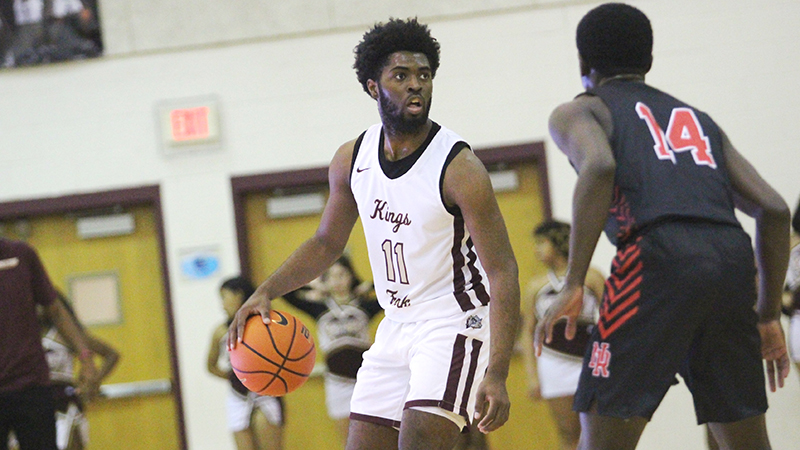 The pursuit of perfection continues for the King’s Fork Bulldogs boys basketball team.

Following a 76-42 triumph over city rival Nansemond River, the Bulldogs moved to 17-0 overall, marking the best start in program history. Previously, King’s Fork’s best start to a season was 9-0 during the 2008-09 campaign when they went on to capture the Group AAA State Championship and finish 31-1 overall.

The Warriors came in riding momentum, having won four in a row to up their mark to 9-5 overall. Early on, they hung with the hosts on Senior Night. They trailed by only two points, 8-6, with three minutes to go in the first period.

Turnovers began to pile up for the visitors, though, and what followed were runs of 13-2 in the second quarter to push the advantage to 20 points by half-time and 13-3 in the third period to eventually get them ahead by more than 30.

“Nansemond did a good job early on of really getting into us and making it difficult for us to get into our spots. We tried to speed them up and get into their bench a little bit,” said King’s Fork head coach Rick Hite, now 72-19 in his tenure with the Bulldogs.

Junior guard Sam Brannen set the tone early with a pair of three-pointers in the opening period on a night when he had 14 points, six rebounds, five steals and three assists.

“I’ve been around Sam a long time. He’s such a strong-willed guard and is wired to score the basketball,” Hite said. “He should be talked about more, because he’s having a great year for us.”

Ten players scored in the first half for King’s Fork, which showcased unselfish teamwork in the form of 13 assists on 16 field goals.

“We need it, and that’s good basketball,” Hite added. “Depth and versatility is really important here. I feel like I have 10, 11 to 12 guys that I really trust. We get a lot of credit defensively, but we talk about taking care of the basketball, getting guys involved and making the extra pass. At every level of basketball, that’s tough to beat.”

The focus for Nansemond River was not to let King’s Fork’s prolific scorer George Beale, who scored 51 points in a game earlier this season, dominate. While Beale would eventually break loose for 17 points, 14 rebounds, seven assists and four steals, he was limited to three field goals before halftime.

“We saw through scouting that Beale is their engine, so we needed to at least slow him down, which I felt we did to an extent in the first half. But they are not a one-man team, because Brannen and (Kaleb) Brown can score, and they have a lot of quality parts,” stated Nansemond River coach Ed Young, who pointed to the 28 turnovers committed leading to the margin getting so lopsided.

“We gave them way too many extra chances for them to score with those (turnovers). Our biggest issue was we couldn’t score with any consistency, nor get offensive rebounds, then we put a lot of pressure on ourselves on the defensive end and that wore us down, especially in the second half.”

Minus two starters in Daron Jackson and Ryan Hite, both of whom they expect to have back soon and for the playoff run, King’s Fork was able to hammer the Warriors on the backboards with 26 offensive rebounds, 13 in each half.

“Rebounding is a want to,” Hite noted. “We talk about getting into the daylight to come up with it and try to buy us another possession. Our guys are athletic and long. We’re not 6-8 or 6-9, but we’ve got 6-4 and 6-5 guys that can get off the floor.”

Darrin Clark and Keshaun Johnson had 11 points apiece in the loss for the Warriors. Johnson had five blocks as well.

King’s Fork is zeroing in on the No. 1 seed for the upcoming Region 4A Tournament, but before that, looms a large battle with another unbeaten team — Class 5 Maury out of nearby Norfolk — on Feb. 12 in a showcase at The Kennel.

“I think it’s good for the 757 and the state. We’re chasing two titles in different classes. This is what it’s about,” Hite said. “You go out there and test yourself. Duke and Michigan State can play, so can Maury and King’s Fork. It’s just basketball.”