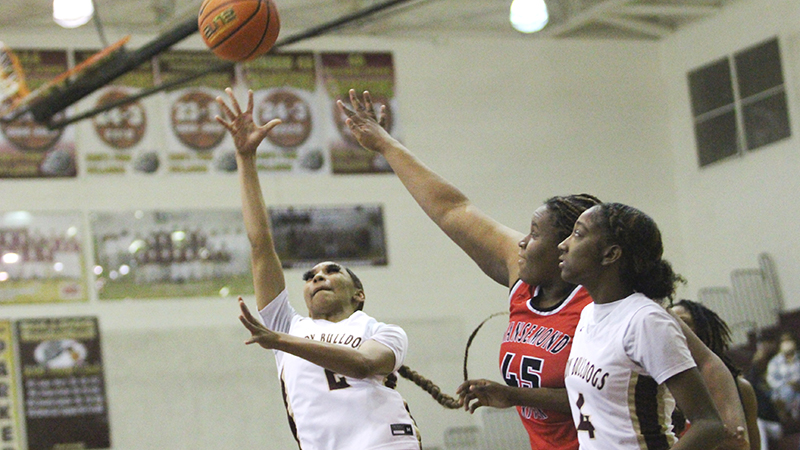 Senior Night at King’s Fork High School saw the Lady Bulldogs begin in an unfamiliar spot, trailing visiting Nansemond River 8-0 just minutes into a contest that had a delayed start on Feb. 8 due to officials arriving late. However, that deficit did not last long for a team that has been on a tear as of late and envisions a state championship run later this year.

King’s Fork scored 31 of the game’s next 41 points to take a 13-point lead into half-time. From there, they never looked back, breezing their way to a 70-32 victory that moved their overall record to 16-3 on the season.

“Definitely when we play together, it can be amazing,” remarked King’s Fork sophomore guard Cyriah Griffin, a newcomer who won a state title last February as a freshman at Princess Anne High in Virginia Beach.

Since starting 4-3, the King’s Fork girls have won 12 in a row. Even more impressive are some of the numbers since the calendar flipped to 2022, where they’re averaging 78 points per contest and holding opponents to a mere 38.5 points per game. All 11 victories have been by double-figures, with the closest margin being a 62-39 triumph over another Suffolk rival, Lakeland, back on Jan. 14.

After piecing together a challenging out-of-district schedule to begin the season, head coach Maurice Fofana has now been able to experiment more with some of his lineups and rotations, which included in the beginning of their contest with the Warriors.

“We’ve had a tough stretch of games. Some nights, some of our kids don’t get a chance to play a whole lot. We wanted to make sure all of our kids and our seniors who have been with us for quite some time got a chance to play and score a bunch of baskets,” commented Fofana, liking how the mixture is coming together on both ends of the floor.

“I’ve always been a defensive guy. When you have a lot of kids that can score the ball, sometimes it’s hard for them to buy into playing defense. We’re going to play defense because we get a lot of shots.”

At the forefront of their attack is the combo of Griffin and senior Yasmine Brown, who scored a game-best 23 points. That type of output is nothing new to her; she averaged 25.5 points per game as a sophomore at Indian River before returning to King’s Fork.

Griffin — who is already being recruited by a host of Division I schools that include James Madison, Old Dominion, Maryland and Ole Miss, among others — chipped in 11 points.

“With those two, it’s like a stick of dynamite. They may be in a slump for a couple minutes, but then boom, they’re explosive. It can happen at any time,” Fofana stated.

“With the other weapons we have on the team, it’s going to be hard to guard us. I’m excited about them. I feel like they’re the best backcourt in the state.”

Sharing the basketball is a key to the success, Griffin says.

“Being more versatile and getting more assists,” she said on the difference in her game compared to this time a year ago. “I like to get everybody involved.”

For Nansemond River, Dasaih Downs had 16 points, half of which came at the free-throw line. The Warriors are 1-14 overall on the campaign.

Griffin and the Lady Bulldogs are thinking about a historic March as one of the favorites in a very competitive Class 4 field.

“I think it would be a big thing for the community for us to be the first (girls) team in Suffolk to get a ring,” said Griffin.

King’s Fork might have its best shot at winning the title since falling to Monacan 60-59 in the Class 4 Final back in 2017.

“This group is full of talent. They have their own identity,” Fofana added. “This team has a chance to be standing last. I would love for nothing more than our kids to go out on a great note and win it all.”