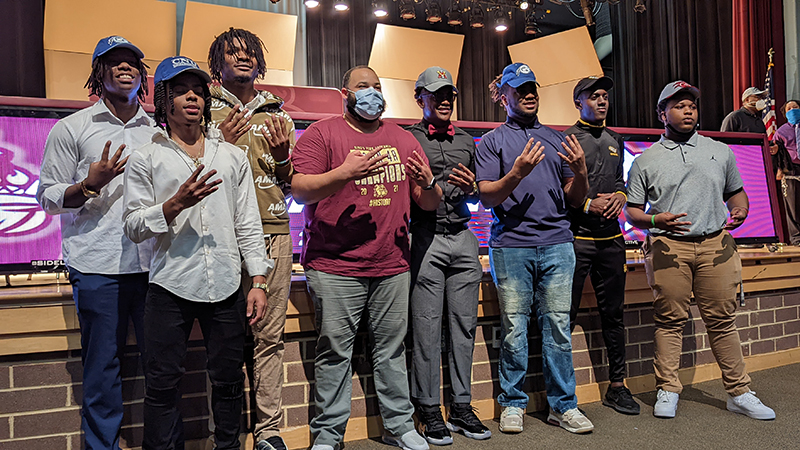 The successful run of the King’s Fork High School football team this past season has continued, as seven more players have signed national letters of intent or have otherwise committed to play at the college level.

While one, Jean-Claude Bile’, received a full scholarship to play soccer at Virginia Commonwealth University in Richmond, the others will continue to play football at the next level.

“I think it’s huge,” Joffrion said. “As a football program, of course you want to focus on wins and losses, but at the end of the day, I really feel like you’re judged by how you impact kids’ lives after high school. I think we’ve done a good job.”

King’s Fork won its first ever region championship in 2021, taking the Region 4A title with a 41-14 win over Warhill before falling 35-28 in the Virginia High School League Class 4 state semifinals to finish 11-2.

“At King’s Fork, we just try to do everything we can to prepare these kids for the next level,” Joffrion said, “but also doing everything in our power to make sure they get there.”

He expects Rounds, who played center for the Bulldogs, to do great things at Division II Virginia Union, calling him a great student-athlete and leader. For the trio heading to Division III Chowan, they will attempt to earn playing time on a team that went 7-3 in 2021.

Cole, who plans to major in civil engineering and minor in business management, will head to Lexington to play safety for the Keydets, who finished 6-5 in 2021 and compete as a Football Championship school in the Southern Conference. He feels like the school’s structure will help set himself up for life.

“VMI, it feels like home,” Cole said. “They’ve got a nice alumni group that comes back to the community and gives back a lot, actually. It’s Division I football not too far from home, but it’s just the right distance I can get away from the area and focus on my craft out there, and I feel like it will set me up better for life.”

Geter, an honors student at King’s Fork who expects to play as a strong safety and some cornerback at the next level, will stay close to home to play for the Captains in Newport News under new coach Paul Crowley. Christopher Newport finished 5-5 in 2021.

“This day means a lot,” Geter said. “It’s what I’ve been dreaming about since I was a little boy to play at the next level. Christopher Newport, it took me like family. Coach Crowley (and I), we have a really good relationship.”

And though Bile’ had the kicking acumen to play football at the next level, he chose to stick with his first love of soccer and play forward for the Rams.

He said he appreciated the support he’s received.

“This day means a lot,” Bile’ said. “Having my family and friends to support me through this has been a journey and through injuries, and working hard, and God on my side, it’s been able to help me reach my goals. I’m just proud to be here.”

Joffrion said it’s important for the program not only to have success on the field but also for players to reach their goals of being able to play at the next level and pursue their degrees. He says it sets a positive example for younger players coming up.

“Sometimes you’ll see a program win, but then you don’t see as many kids signing,” Joffrion said. “So for us to win the first regional championship and to be able to represent that with 11 kids signing scholarships to the next level, I think it’s huge. I think it shows that our coaches do a great job of mentoring our young men, making sure they have the right academic qualifications and just also preparing them. I think that’s what’s very great here at King’s Fork. We have a great administration here, great teachers and everyone has just bought in to helping these kids succeed.”