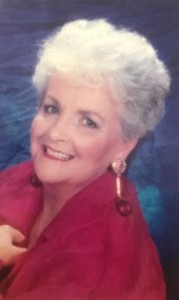 Jeanne Banks, born Barbara Jean Johnson in 1934 in Portsmouth, passed peacefully from this world on Sunday, Feb. 13, 2022. She was at home in Suffolk, surrounded by her children and held in loving prayerfulness by many people all around the world.

Jeanne was born the middle of five children to Thad and Lula Johnson. Growing up in Portsmouth and being sister to Delores, John, Alice and Charles, her life was filled with times of great joy and much laughter. The church was center in their lives and is where she began sharing her gift for performing. She and her siblings remained close all their lives.

Jeanne began her adventure-filled life when she attended Columbia Bible College in South Carolina at age 16.  It was there she met John S. Banks, whom she wed in 1952. Their marriage lasted 68 years, until John’s death in October 2020.

During those long years, Jeanne and John raised five children of their own. While John pursued a career in the ministry, Jeanne supported him by singing in choirs and shepherding the women and families of the congregations.

Jeanne’s commitment and service continued as John joined the U.S. Army in 1966. Their 27 moves started out in South Carolina, followed by Arkansas, Texas, Virginia, Oklahoma, New York, Illesheim, Germany; Connecticut, Maryland, West Berlin, Germany; Georgia and finally Suffolk. Wherever she went she never felt like a stranger, always made friends and did her best to use her God-given gifts.

This service included her dedication to the Protestant Women of the Chapel in Germany, eventually leading to her work with the European chapter and traveling around the continent.  Jeanne became involved with Pilot International, for which she served as a charter member of the Nansemond River branch, eventually becoming President and serving as Governor for the Virginia District.

For many years she also led the volunteers at Suffolk’s Obici Hospital and became state president of the Virginia Association of Hospitals and Healthcare Volunteers. Jeanne was also President and Vice President of the local AARP chapter, but her favorite position there was being the cook and providing meals to their monthly meetings for many years.

When she was told no funding existed to put a Christmas wreath on every gravesite at the local Albert G. Horton Jr. Memorial Veterans Cemetery, Jeanne rallied friends and family, and placed the groundwork for what would become the nonprofit Horton Wreath Society.

Jeanne also chaired the Relay for Life, served as a hospice volunteer, the Area Council on Aging, March of Dimes, King’s Fork Women’s Club, delivered Meals on Wheels and drove cancer patients to appointments. She was an active member of Suffolk Presbyterian Church for many years. Cooking and baking for others was an act of love throughout her life, especially sharing her brownies! There were many other examples of service and commitment to others throughout her life, all done in the name of Christ.

During her life, she experienced great joy and love, but she also knew great pain and loss. She lived through poverty, the Great Depression, hunger, war and the loss of her first daughter, Mary Alice.

Jeanne will be mourned by the many who have been blessed by her friendship and benevolence, and especially by her children, John (Nancy Barton), Thaddeus, Timothy (Susan Douglas), Sarah (Manfred Bowen) and Deborah; three grandchildren; four great-grandchildren; her loving in-laws, Mary Ellen Johnson, Cynthia and Barry Cooke, Cy and Candi Lemmond, Paula Banks Chandler; and many nieces and nephews.

In lieu of flowers, memorial donations can be made to the Horton Wreath Society, a charity of your choice, or, as Jeanne would say, “Just share your gifts with others!” R.W. Baker & Co. Funeral Home and Crematory, Downtown Suffolk Chapel is serving the family.