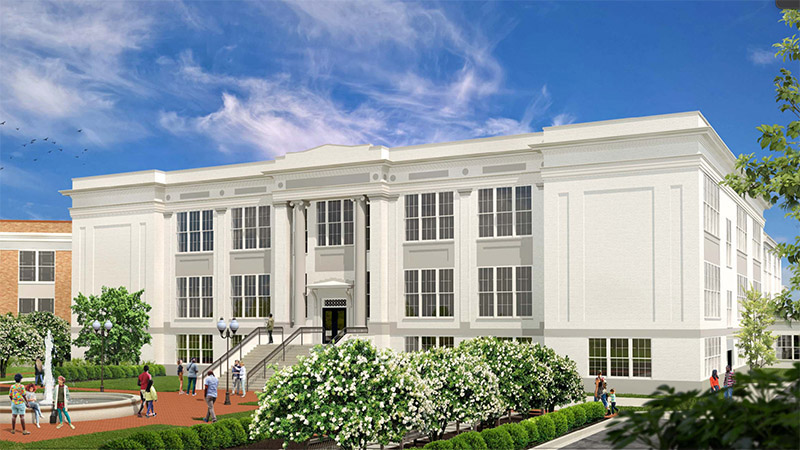 The Historic Landmarks Commission recently rejected the proposed color choice for the Suffolk Center for Cultural Arts, calling it too dramatic a change for the iconic downtown building. However, City Council unanimously reversed the commission’s decision to allow for it, agreeing with arts center officials of the need for the Tnemec coating to help preserve it. (Submitted Image)

Work to restore the nearly 100-year-old Suffolk Center for Cultural Arts can proceed after City Council unanimously reversed a Historic Landmarks Commission, allowing the iconic building to have a dramatically different look as officials work to restore and preserve it.

The commission had in January, by a 6-1 vote, approved the Department of Planning and Community Development’s recommendation to grant a certificate of appropriateness to allow the arts center at 110 W. Finney Ave. to replace its windows, the supports above them and moldings around the top of the building while rejecting its color choice to coat the exterior bricks, columns, cornice, dentil, trim, accent panels and upper parapet.

The arts center will remain open during the renovations, scheduled to begin this spring or summer, with work to be completed in stages to allow for performances, classes, camps, art exhibitions and rentals to continue without interruption.

With the council’s approval following a public hearing at its Feb. 16 meeting, however, the arts center will get a visual and protective facelift with its choice of Tnemec coating — it’s technically not a paint, according to Dills Architects president and owner Clay Dill, whose Virginia Beach-based company is heading up the arts center project.

That coating, unlike more traditional paint that can trap moisture inside the masonry and cause more problems in freeze/thaw cycles, is breathable and made for use on old bricks, allowing the moisture from inside the building to penetrate the brick and come back out. The color, a white opaque protective coating, provides for a more distinctive look. Still, painting unpainted brick is not normally allowed according to Historic District guidelines.

Council members, who had an opportunity to tour the arts center and see its current condition, seemed largely unconcerned by the building’s change in color and were more concerned about keeping it structurally sound.

Councilman Roger Fawcett observed water damage in the building he described as extensive and said it is important to preserve it. He believes the work to be done to the arts center will turn it, essentially, into a brand new building, noting its previous iteration as the old Suffolk High School, which opened for students Sept. 13, 1923 for grades 9 through 12 and graduated its first class in 1924. The school’s last graduating class was in 1990, and the building reopened as the arts center in 2006.

“If we don’t step up and fix this, and it’s never going to be what everybody wants, the damage is going to continue to deteriorate the building to the point where there’s going to be, maybe, a large portion of it that we’re not going to be able to use, and we’re going to lose an opportunity here that we can’t rebuild,” Fawcett said.

Mayor Mike Duman called the arts center “a quasi-public building” — the city has invested more than $14 million into it — and said allowing all of the work to go forward will protect the interest of the city and the tax dollars already spent on it.

Lorelei Costa Morrow, executive director and CEO of the arts center, spoke during the public hearing, showing council members photographs to illustrate her point about the issues needing attention with the 78,600-square-foot structure.

“We have significant leaks and water damage that have rendered parts of the building unusable,” Costa Morrow said, “and you can see from some of the photos we have growing safety concerns as well. This cannot go on. This building is an iconic landmark. It’s an economic engine for downtown. It’s key to the revitalization of downtown.”

She said everyone shares the common goal to preserve the building for future generations to keep it safe and viable for visitors, noting in a normal year it hosts about 30,000 people, including about 6,000 children, for various events.

“Our building is a vital hub for community arts and arts education,” Costa Morrow said.

Mark Brinkley, president of C.W. Brinkley Inc. Construction of Suffolk, the general contractor for the project, said he was brought in due to the arts center’s leaking issues about 10 years ago. With cost a factor on what it could do, at that time, he suggested a clear silicone sealer for the northeast wall of the building, as it typically gets the brunt of storms. It worked for a few years before it started leaking again.

He noted the work he and Dills Architects had done in downtown Norfolk with the 100-year-old building that housed Crossroads Church, which underwent a similar renovation and used the same Tnemec paint that will be used at the arts center. Since adding that paint more than six years ago, there have been no issues with leaking.

“If I felt that the clear coat was as good as the Tnemec coating, we would propose that,” Brinkley said. “But we have even tried the clear coating one time on the east wall and it’s only lasted three to five years.”

The Tnemec coating, he said, would last from 15 to 18 years. Clear-coating the building would cost about $375,000 more to paint it every three to five years versus the longer-lasting coating.

Dills said one of the key indicators of damage is when the outside walls are letting water through from saturation, which gets into the wood framing into the walls on the inside and penetrates into the building. The Tnemec coating is applied three times to the building, he said, and it’s one that remains elastic over time, versus a clear coating that gets brittle.

“The building’s almost guaranteed to move; it’s an old building,” Dills said. “We think it sits on wood sills down in the ground, it has wood framing on the inside. It’s almost guaranteed to shift and move and age that way, and (the Tnemec coating) stays breathable and flexible with that. … The point of all this is to ensure longevity. It’s about the durability in the next 100 years of the Suffolk Center.”

Said Councilman Donald Goldberg: “We call it the old Suffolk High School, but that’s gone. We have to get over that. It is the cultural arts center. It is the centerpiece for downtown. It really does work, and I think this coating is a great idea.”

The Suffolk Center for Cultural Arts, at 110 W. Finney Ave., will host an open house from 4 to 6 p.m. Feb. 24 to allow people to learn more about its renovation plans. A presentation will be held at 4:15 p.m., with tours of the building at 4:45 p.m. and 5:15 p.m. The arts center’s executive director Lorelei Costa Morrow, its architect, general contractor and board leadership will also be available to answer questions about the project.