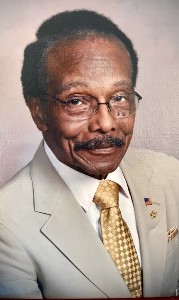 He graduated from Booker T. Washington High School in Suffolk. He excelled at academics and varsity football and was loved by his fellow classmates. During that time, he also assisted his mother, Perry Jane Cameron (affectionately known in the community as Miss Pearl) of the renowned Horseshoe Café Suffolk restaurant. After high school, joined the Army. He served his country in both the Korean and Vietnam Wars where he received the Vietnam Service Medal with one Bronze Service Star, Vietnam Cross of Gallantry, Armed Forces Expeditionary Medal and several other accolades. He also managed to become a third-degree black belt in Judo. After retiring from the Army, he joined the United States Secret Service. John was part of the team of Agents that protected several United States Presidents and foreign dignitaries. He served under Presidents Jimmy Carter, Ronald Reagan, George H. W. Bush and Bill Clinton. After retirement, he moved back to Suffolk. He was a member of East End Baptist Church and enjoyed singing in the choir and serving as an usher.

John passed away due to illness. Just like he dealt with all experiences in life, John managed his illness with strength and grace and wanted to spend as much time with his loved ones as possible.

In addition to his parents, Lee Roy Prince and Perry Jane Cameron-Lambert, he was predeceased by his eldest son, Derek V. Davis. John is survived by his former wife, Jean Davis of Baltimore, Md.; their three children, Kimatha Joyner (Curtis) of Suffolk, Andrena Dimitrijevic (Vojkan) of Miami, Fla. and Brett Davis of Newport News; half-siblings, Sue Prince-Sykes and James Prince of Sanford, N.C.; seven grandchildren and 10 great-grandchildren, family and friends.

A funeral service will be held at Arlington National Cemetery in the near future. Please follow his in-memorandum Facebook page facebook.com/In-Memorandum-John-Lee-Davis-105678668715995 or @InMemorandumJohnLeeDavis for details on his funeral date and live stream.