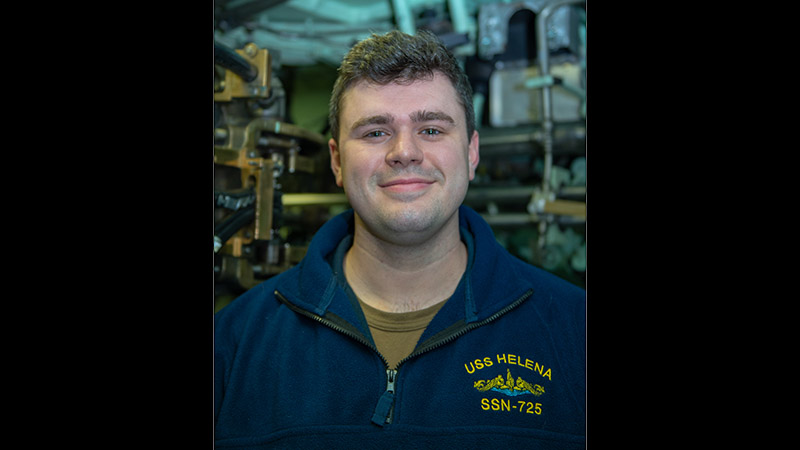 A Suffolk native is serving aboard USS Helena, one of the world’s most advanced nuclear-powered submarines.

“My dad was a chief in the Navy,” said Cedotal. “When I was growing up, I had some rough teenage years. He pulled me aside one day and told me that his situation was very similar at my age and the Navy made him proud of who he was. I of course wanted to do the same thing and be like him.”

Growing up in Suffolk, Cedotal attended Nansemond-Suffolk Academy and graduated in 2014. Today, Cedotal relies upon skills and values similar to those found in Suffolk to succeed in the military.

“Suffolk is a quiet farm town,” said Cedotal. “Everyone is friendly. Growing up there I learned the importance of good manners and to enjoy the quiet in life.”

These lessons have helped Cedotal while serving in the Navy.

Known as America’s “Apex Predators!” the Navy’s submarine force operates a large fleet of technically-advanced vessels. These submarines are capable of conducting rapid defensive and offensive operations around the world, in furtherance of U.S. national security.

Fast-attack submarines are designed to hunt down and destroy enemy submarines and surface ships; strike targets ashore with cruise missiles; carry and deliver Navy SEALs; conduct intelligence, surveillance and reconnaissance missions; and engage in mine warfare. The Virginia-class SSN is the most advanced submarine in the world today. It combines stealth and payload capability to meet Combatant Commanders’ demands in this era of strategic competition.

The Navy’s ballistic-missile submarines, often referred to as “boomers,” serve as a strategic deterrent by providing an undetectable platform for submarine-launched ballistic missiles. SSBNs are designed specifically for stealth, extended patrols and the precise delivery of missiles. The Columbia-class SSBN will be the largest, most capable and most advanced submarine produced by the United States — replacing the current Ohio-class ballistic-missile submarines to ensure continuous sea-based strategic deterrence into the 2080s.

Guided-missile submarines provide the Navy with unprecedented strike and special operation mission capabilities from a stealthy, clandestine platform. Each SSGN is capable of carrying 154 Tomahawk cruise missiles, plus a complement of heavyweight torpedoes to be fired through four torpedo tubes.

Strategic deterrence is the nation’s ultimate insurance program, according to Navy officials. As a member of the submarine force, Cedotal is part of a rich 122-year history of the U.S. Navy’s most versatile weapons platform, capable of taking the fight to the enemy in the defense of America and its allies.

Serving in the Navy means Cedotal is part of a world that is taking on new importance in America’s focus on rebuilding military readiness, strengthening alliances and reforming business practices in support of the national defense strategy.

“Most of the things we have come through transit in the ocean,” said Cedotal. “Defending that and having freedom of the seas is invaluable. You can’t have land superiority without sea superiority and air superiority comes along with that. We also have cyber and info warfare commands that are on the forefront of national security.”

With more than 90% of all trade traveling by sea, and 95% of the world’s international phone and internet traffic carried through underwater fiber optic, Navy officials continue to emphasize that the prosperity and security of the United States is directly linked to a strong and ready Navy.

Cedotal and the sailors they serve with have many opportunities to achieve accomplishments during their military service.

“I remember my proudest moment in the Navy vividly,” said Cedotal. “We had just come out of the shipyard and verified that we were good to go. We left for a five-day test run and on day one, a vital piece of equipment broke. We were told to pull back in to get it replaced, but we said no; that’s just not how submarines operate. We had the part shipped out to sea. It was replaced in the theater. The problem was fixed and we continued the mission. Being a part of that and watching people get awarded for their hard work was very rewarding.”

As Cedotal and other sailors continue to train and perform missions, they take pride in serving their country in the United States Navy.

“Serving means I get to keep my family safe,” added Cedotal. “I went to a military college so the family you have there, you have on a bigger scale with your command. If I see someone out in town with a Navy ball cap on, I know that they are a competent and considerate human being.”