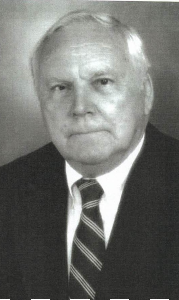 A 13th generation Virginian, he grew up in Suffolk. He proudly served in the U.S. Navy during the Korean War as a boiler technician on the USS Block Island CVE-21. Honorably discharged at the rank of Third-Class Petty Officer, he returned to his home in Suffolk and began working for the Hercules Powder Company in Franklin. He soon moved with his wife and family to the town of Holland in Nansemond County where he lived for over 50 years. He spent his last years at the Lake Prince Woods retirement community in Suffolk where he continued his friendship with many childhood friends.

In 1964, he began a 27-year career of public service with Nansemond County, the City of Nansemond and the City of Suffolk, rising from the position of zoning administrator to assistant city manager and on multiple occasions serving as acting city manager. After retiring in 1991, his passion for public service continued. He served as councilman for the Holy Neck Borough from 1994 to 1998 and as mayor of Suffolk from 1996 to 1998. Though he never attended college, he was a lifelong student. A constant and deep reader of history, politics, and philosophy, he was an ardent conversationalist who passed his love of books and learning on to his children. Deeply committed to his family and community, he set an example of love devotion, hard work and integrity that all his children aspire to match. He will be deeply missed and never forgotten.

A visitation will be held from 1 to 3 p.m. on Saturday, March 12, at the R.W. Baker & Co. Funeral Home, 509 W. Washington St., followed by a reception at Suffolk Center for Cultural Arts, 110 Finney Ave. Burial will be a private ceremony in Cedar Hill Cemetery. In lieu of flowers, donations can be made to either the Alzheimer’s Foundation or Cystic Fibrosis Foundation. Condolences may be offered at RWBakerFH.com.