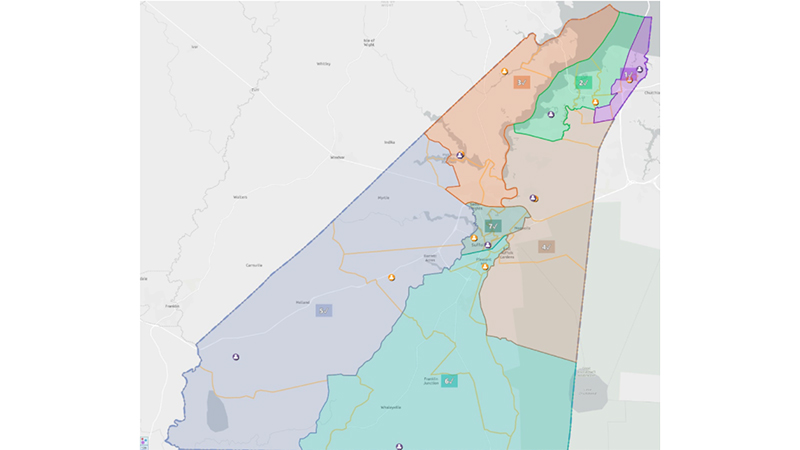 Lue Ward ran for Suffolk City Council largely on the issue of redistricting, saying some Black communities had been split into two or even three different voting boroughs.

As president of the local chapter of the National Association for the Advancement of Colored People in 2011, he was outspoken against the city’s redistricting map, which the chapter said disenfranchised Black voters.

Ward, along with local leaders and NAACP national redistricting experts, developed an alternative map that had three boroughs composed mostly of Black people, three that were majority-white boroughs and a “toss-up” borough where the numbers were about equal. But over the NAACP’s objections, City Council and the U.S. Department of Justice at that time approved the plan that has been in place for the past 10 years.

“I ran because of Pughsville,” Ward said of events 10 years ago following the council’s unanimous Feb. 16 vote to adopt a redistricting plan he initiated. “And when I ran, I wasn’t satisfied with what had happened. They split ‘em up, so I decided to run,” later saying that “if I wouldn’t have won, Pughsville would still be split up, so I’m going to give myself that credit.”

He mentioned his mentors in the NAACP, and praised Johnnie Edwards III for his efforts.

Ten years later, as council sought redistricting maps from its consultant, Robert Loftin of McGuire Woods, Ward, who represents the Nansemond Borough, was less than satisfied with the two options presented and continued to insist that the redistricting plan be fair for Black residents.

So, with some help from Edwards, he set about coming up with another — or three.

It ultimately was one of those maps that Loftin tweaked to come up with the plan, referred to initially as Alternate C and later as Proposal C, that council adopted. Ward’s alternative map has three majority-minority districts, three majority districts and one that is a toss-up, and it keeps all incumbents in their boroughs. It also kept neighborhoods intact and didn’t divide them into different boroughs.

Most speakers at a public hearing prior to the vote supported Proposal C.

Ward thanked members of council for their votes.

“I ain’t mad with nobody no more,” Ward said, “because I feel good I did something for a community that deserves much more than what they have, but now they’re together.”

At the Jan. 5 work session, Loftin had said Ward raised good questions about the two original proposed maps, but said he didn’t make a new proposal at that time because “there’s no way to do that that would not potentially jeopardize keeping incumbents in their current boroughs.” He said it also needed to get done in a timely manner, but Ward stressed that it needed to be done right, not just rushed through, and there was “no conversation with nobody” about it.

Ward had said he couldn’t accept either of the first two proposals and was critical of both, and told Loftin at the time that he could not accept that another such map could not be drawn without taking an incumbent out of their borough.

“If these maps are not right, we’ve got 10 years of the same map,” Ward said in January. “It’s not me. … It’s being fair to the other people who have an opportunity to run 10 years from now.”

Prior to the Feb. 16 vote, Loftin explained that Proposal C derived from council comments and draft ideas Ward had spoken to him about, while keeping incumbents in their boroughs, staying within the allowable 5% deviation in population totals – the target redistricting population for each borough was 13,499 based on the 2020 U.S. Census – and keep communities together, particularly Pughsville, which is in the Nansemond Borough.

Councilman Tim Johnson thanked Ward for his insistence on a third map.

“I think we would have just flown with the two maps originally if he hadn’t been so insistent,” Johnson said. “And Lue, you were right to be insistent. I think the map that came back, map C, pulls everything into vision. The districts are set really well. Communities are together. I’m impressed. It serves me well in Holy Neck and I think, Whaleyville, and I think we all are where we belong on the map.”