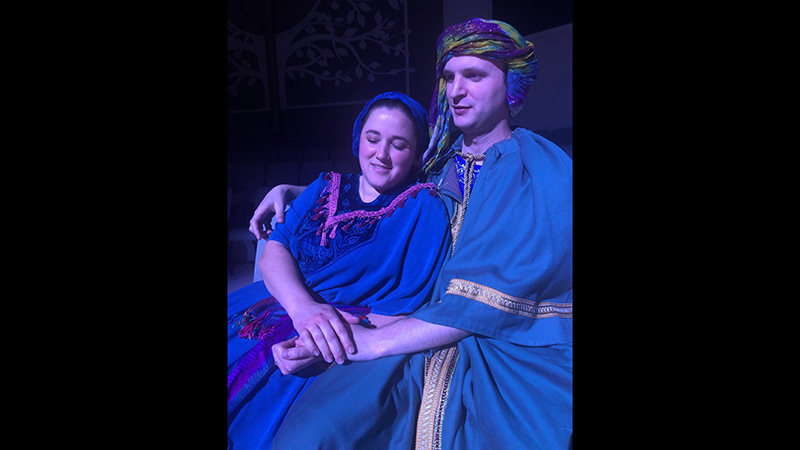 Maryanna Stroutman and Jacob Stanton practice for their upcoming performances of “The Eight” on March 17, 18 and 19 at West Minster Presbyterian Church.

This spring, folks can get a new perspective on a well-known story from the Bible.

“The Eight” is a night of drama and worship that focuses on the story of Noah and his family’s experience as he built the ark and endured the flood. Genesis 6 starts the story of God telling Noah to build an ark for his family and two of each kind of animal before a great flood. This play takes a deeper look at the family chosen to survive.

“I wanted to unpack this story to show they are human like us, just in a different time and place with a bigger mission,” said Noel Lewis, writer and director of the play. “They were as human as we are and I wanted to tackle that side.”

With the pandemic, racial division and political unrest, Lewis felt that this would be a fitting story for today. Just like Noah’s family during their 40 days on the ark, today’s culture is surrounded by chaos and relational friction.

This is the first production of this magnitude that Lewis remembers in his 13 years of attending Westminster Reformed Presbyterian. The audience will experience great actors, lighting, sounds, original songs and professional-grade costumes, he said.

This is Lewis’ first play. He chose this story as it is one of his favorites. He decided to take a deeper look at Noah’s life as many Old Testament characters seem larger than life with some of the problems they face.

“I hope those who come are entertained, but more importantly, I hope that they get something out of it that really resonates with them,” said Lewis. “I don’t want to spoil it, but despite the flood the play ends on a hopeful note that points to the future of something better coming.”

Admission for this is free and reservations can be made at https://bit.ly/theeightplaytickets.