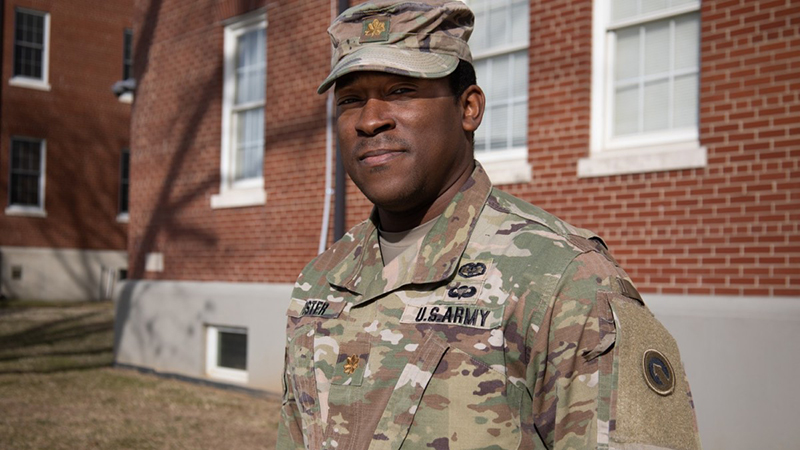 The world watched in curiosity and fear when a new and sometimes deadly flu-like disease began spreading throughout Asia in early 2020.

One officer now serving in the Army’s 1st Theater Sustainment Command was stationed with the 65th Medical Command in South Korea when soldiers started showing signs of a respiratory illness after visiting mainland China.

Maj. Jonathan Foster, operations officer and deputy surgeon who grew up in Suffolk, manages all of the plans and operations for the surgeon cell, which includes monitoring vaccines, testing and handling the administrative part of medical boards for soldiers in the command.

“Soldiers were permitted to visit China while stationed in South Korea, and when I was with the 65th, we saw this mysterious illness and didn’t know what it was,” he said.

Then they created an isolation facility directly across from where Foster lived. They didn’t know exactly what the illness was, but they knew that it was already becoming an issue.

“Once it hit the city of Daegu in the southeast, and the country started shutting down, it started a domino effect,” the major said. “I told my wife that this thing is going to spread, and it is going to spread to the United States.”

Foster knew it wasn’t if but rather a matter of when.

Two years later, Foster continues to perform duties around COVID-19, including updated response and vaccination efforts to ensure those within the command remain mission ready.

These efforts are essential for the command to continue to provide sustainment mission command and execute operational-level sustainment support within the U.S. Central Command area of responsibility. Many of the countries in which the 1st TSC operates require vaccines, some also require COVID boosters for personnel entry into country.

Foster’s work does not go unrecognized by his leaders.

“Maj. Foster has been instrumental in the ARCENT and Fort Knox response to the COVID-19 pandemic, being highly involved in the testing and vaccination programs,” said Lt. Col. John Campagna, command surgeon. “His efforts ensure efficiency for 1st TSC Soldiers to obtain the appropriate medical treatments.”

Not only is Foster’s work essential here, but it was also critical in September when he deployed to Qatar for one month in support of the 1st TSC’s mission as a part of Operation Allies Refuge. 1st TSC established and ran one of the safe haven locations with personnel from the 3rd Infantry Division Sustainment Brigade and 3rd Medical Command (Deployment Support).

“I went to support the sustainment brigade and the medical brigade handling operations,” Foster said.

He managed the testing and vaccination operations as evacuees from Afghanistan arrived at Camp As Sayliyah and was fascinated that only less than one-half of one percent tested positive for COVID-19.

Foster is grateful that he could deploy in support of the operation. “That was a great opportunity for me and something that I am very much appreciative to have been a part of,” Foster said. “That is why I like doing what I do.”

He also said that our guests at CAS were very grateful to them and that many are currently living at Camp Atterbury, Indiana, as they start their new lives in America and begin the process to become U.S. citizens.

Lastly, the deputy surgeon plays an administrative role with medical boards in the command. He communicates with soldiers’ supervisors and sometimes counsels or helps explain the medical board process to those involved.

A medical board is composed of active-duty physicians who review a soldier’s clinical case file and decide whether the soldier should return to duty or be separated from service, using the published medical standards for continued military service.

“I might tell a soldier that they’re getting med boarded, and they might think that it’s the end of the world,” he said. “At the end of the day, our job is to take care of soldiers, and sometimes they might not like it.”

Foster is passionate about taking care of Soldiers, whether it’s at Fort Knox, or anywhere in 1st TSC’s area of operation.

“When people in this building have to do something that’s in support of a Soldier downrange, I make sure that we have given them all that we can to ensure their success,” he said.

Foster can provide support to Soldiers in the 1st TSC because of the support he receives from his family at home in Elizabethtown, Kentucky. He is married and has a 6-year-old daughter. Foster’s mother, a retired college professor, also lives with him.

Foster has fond memories of growing up in Suffolk, where he said most people either served in the military, were civilian federal employees, or had some connection to the military.

He earned his bachelor’s degree in health care administration from Norfolk State University and went on to earn his master’s degree from Liberty University.

Foster also comes from a family of veterans. His father retired after serving in the Navy for 22 years. There are a total of nine children in his family, and everyone served in some capacity, except for one.

He always knew that he wanted to serve.

Foster said that he has been fortunate in his 12-year Army career to have had a lot of good seniors and mentors who have kept him squared away and that he has enjoyed serving with the First Team.

“Serving here has given me the opportunity to see things from a strategic standpoint where my decisions might be affecting a theater,” he said. “It’s been a great opportunity for professional development.”

Over 1.5 million steps in the right direction: Bowser…