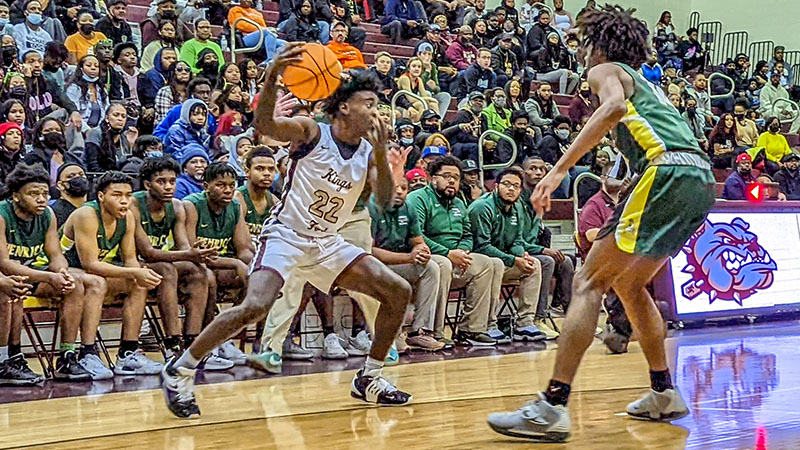 King’s Fork’s Elijah Walker prepares to make a move against a pair of Henrico players during the Class 4 boys state quarterfinal. The Bulldogs won that game 84-52 before falling at Varina Monday 84-68 in a state semifinal matchup.

King’s Fork’s first loss of the season came at the worst time.

The Bulldogs, having to take to the road for the Class 4 boys basketball state semifinal, had won their previous 24 games, and 29 straight dating back to two seasons ago, but could not overcome a fast start and balanced-scoring effort from Varina in an 84-68 loss.

“They made shots, we fouled a lot and we never got into it,” said King’s Fork coach Rick Hite. “We never got into a rhythm. It was a weird game, but credit to Varina for doing what they needed to do.”

Sam Brannen led King’s Fork with 20 points, George Beale had 16 and Daron Jackson 14, but Varina (24-1) pulled a page from the Bulldogs’ playbook in having five players score in double figures.

“They did everything I thought they would do,” Hite said. “Our guys knew what they would do. They did what we expected them to do. I just think it was one of those nights. We picked a bad time and a bad atmosphere not to play a really good basketball game. … I think people will point to whatever they want to point to, but I just think for me, our guys were better than that. They just didn’t play a good game last night.”

Hite has coached many of Varina’s players in AAU basketball since the third grade and coaches an AAU team with current Blue Devils coach Kenneth Randolph. He has also coached with other Varina coaches, so Hite and his players were familiar with the Blue Devils and their style of play. He said he and their coaches discussed this possibility of having to play one another if Varina dropped to Class 4. It became possible after the Blue Devils moved down from Class 5 to Class 4 at the beginning of the 2020-21 school year, playing in Region 4B. King’s Fork plays in Region 4A.

“If you ask their coaches, they will tell you themselves, ‘Hey, we have a lot of the DNA that the King’s Fork team displayed,” Hite said. “I’m not trying to put myself out there. It’s just the way it is. I have a close relationship with them.

He compared Monday’s game to the 1991 UNLV men’s basketball team, which had been undefeated before losing to Duke in a game many consider to be one of the greatest NCAA Final Four games in history. The previous season, UNLV had beaten Duke by 30 points in the national championship game.

Hite said Wyche, playing point guard. controlled the tempo of the game in a similar manner that Duke’s Bobby Hurley had back in 1991 against UNLV, “and then (Varina’s) prime-time players score. They had a balanced attack and all I could think about as the game was unfolding was ‘Man, that’s how that game went.’”

King’s Fork (24-1) had reached the state semifinal game following a dominating 84-52 win over Henrico in the Class 4 quarterfinal.

Brannen led the Bulldogs in that game with 27 points and Beale had 22 as they led throughout the contest.

Though they won that night, and followed up with the disappointment of having their season end, the Bulldogs evolved as the season went on, growing and playing better, and having different players evolve and step up throughout the season.

“People talk about what the team was,” Hite said. “I remember at the beginning of the year people thought that the team wouldn’t make the playoffs, let alone go 24-1. We lost (Jayden) Epps, we lost some guys, we lost a lot of guys, actually. It’s funny how the narrative changed throughout the year.”

And to look back on a season two wins shy of a state championship, Hite appreciates it for what it was. The Bulldogs made a run in 2020 after not getting a chance to finish the season, with the Virginia High School League declaring them co-state champions after COVID-19 forced the cancellation of the state championship game. They didn’t get to play last season during the height of the pandemic and this season, had to navigate their way through it.

“We’ve never ducked anyone,” Hite said. “We did it our way. Our guys were overlooked, probably underappreciated for a lot of the season. And then it became like a movie. The crowds were crazy. We had a chance to make history, and to fall in the game in the state semifinals, on the road, to one of the top teams in the state of Virginia, there’s no other way to look at it other than a positive.

“Will you be disappointed by the overall outcome? Probably. But when we look back on this, it was a historic run. I’m sure that, over time, it will be remembered for what it is, or what it was.”