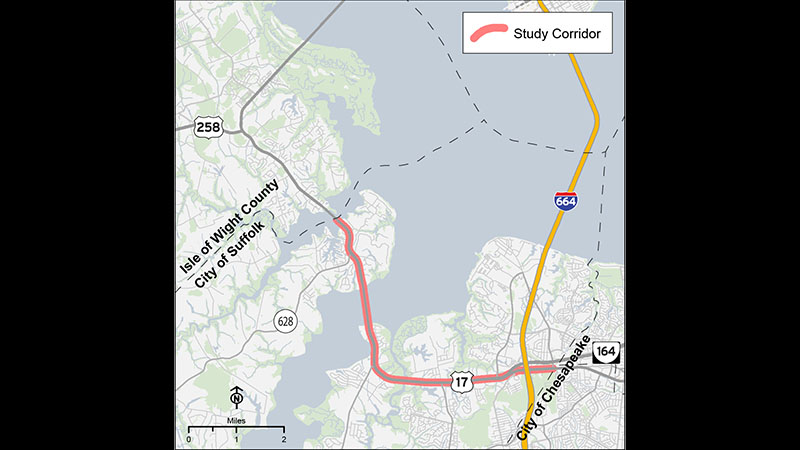 The Virginia Department of Transportation is looking at possible improvements on a key stretch of U.S. Route 17 in North Suffolk and Isle of Wight County, but wants to do it without large-scale widening measures.

VDOT has issued a third survey of the Route 17 corridor, this one focusing on the area from the Suffolk city line to Route 258, also known as Brewers Neck Boulevard in Isle of Wight.

Those completing the survey will be rating and prioritizing proposed corridor improvements.

The survey suggests four possible outcomes for that stretch of road:

VDOT also suggests possible improvements along Route 17 from Omera Drive to Sugar Hill Road and along the corridor at Cedar Grove Road.

The surveys are part of what VDOT says is an arterial preservation plan to improve safety, maintain road capacity and allow traffic to flow more freely along the road.

VDOT, which began a trio of surveys in fall 2020, says the latest study will be used to propose improvements to the road that will improve safety and relieve congestion. In previous studies, VDOT looked for feedback on people’s travel experiences between Isle of Wight and Suffolk. More recently, it sought more localized feedback specific to the College Drive area of North Suffolk to the Isle of Wight County line.

The current survey is available through March 21 at https://live.metroquestsurvey.com/?u=ku8u8p#!/.

People can also send written feedback to Jerry Pauley at 7511 Burbage Dr., Suffolk, VA 23435 or at Jerry.Pauley@VDOT.Virginia.gov. People are asked to reference “Route 17 Arterial Preservation Plan Study.” More information can be found on the website project page at https://www.virginiadot.org/projects/hamptonroads/route_17_arterial_preservation_plan.asp.