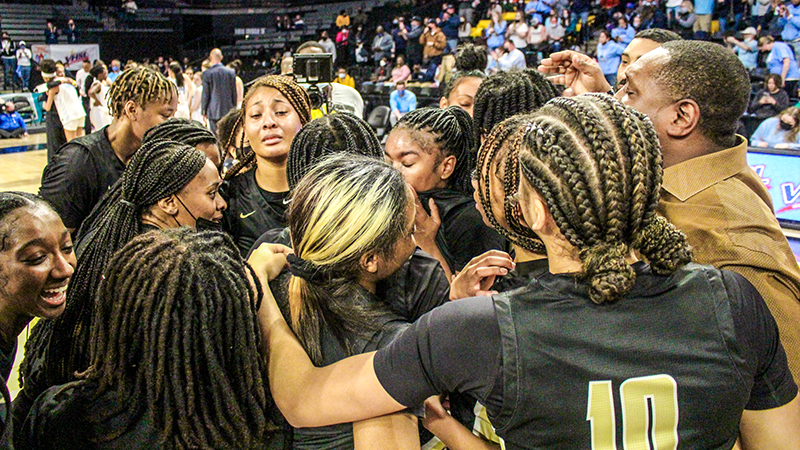 While King’s Fork girls basketball coach Maurice Fofana was praising his current team for their efforts in wrapping up an epic season with a Class 4 state championship, he made sure to shout out his team that reached the 2017 title game but fell just short.

That group, which finished 24-6, lost by a single point to Monacan.

They were among the loudest people cheering the Bulldogs on in the Siegel Center in Richmond as King’s Fork pulled out the 71-67 victory over Millbrook to cap their championship season at 23-3. It is the first time a Suffolk school has won a girls basketball state championship.

Fofana said all of his players wanted to win for him, even as he stressed that as he did as a boys player for Nansemond River’s 1995 state championship team, they had to get one for themselves.

“They wanted to win it for me, just like the kid Camary Harris was one of the ones that, right at the end of the game in ‘17, missed a putback,” Fofana said. “But when she won her first MEAC championship ring, she called me and said, ‘Coach, this ring is for you.’”

Harris, a first-team, all-state player during her senior season at King’s Fork that wrapped up with the title game loss, was named to the Mid-Eastern Athletic Conference all-rookie team in her freshman season, when her Bethune-Cookman team won the conference tournament and reached the NCAA tournament. She wrapped up her senior season in college on a strong note, scoring 17 points in a win against Florida A&M. It was her fourth-straight game — and sixth in seven games — in which she scored in double-figures.

Fofana noted how special the 2017 team was, and what they still mean to him. And he acknowledged how much he wanted the championship for the four seniors on the team — Amelion Pierce, Zamya Rodgers, Yasmine Brown and Terrana Thornton — and for the team two years ago that made it to the region tournament and the other that didn’t get to play last season due to COVID-19.

“These young ladies that we have have played at a high level throughout their basketball career,” Fofana said, “so it wasn’t a situation where I felt like that they were going to give up or not be able to fight it out ’til the end. There was no doubt they were going to fight it out. We had no reason not to leave it all out there. We had four seniors, and we wanted to do it for them, for the young ladies that were here their freshman year. … we had a chance to move on and advance.”

“It’s just been amazing for me,” Fofana said.. I’ve had great kids throughout my career, and they are more than deserving for this, because this is not just for me and the young ladies that are here now, it’s for all of our kids.”