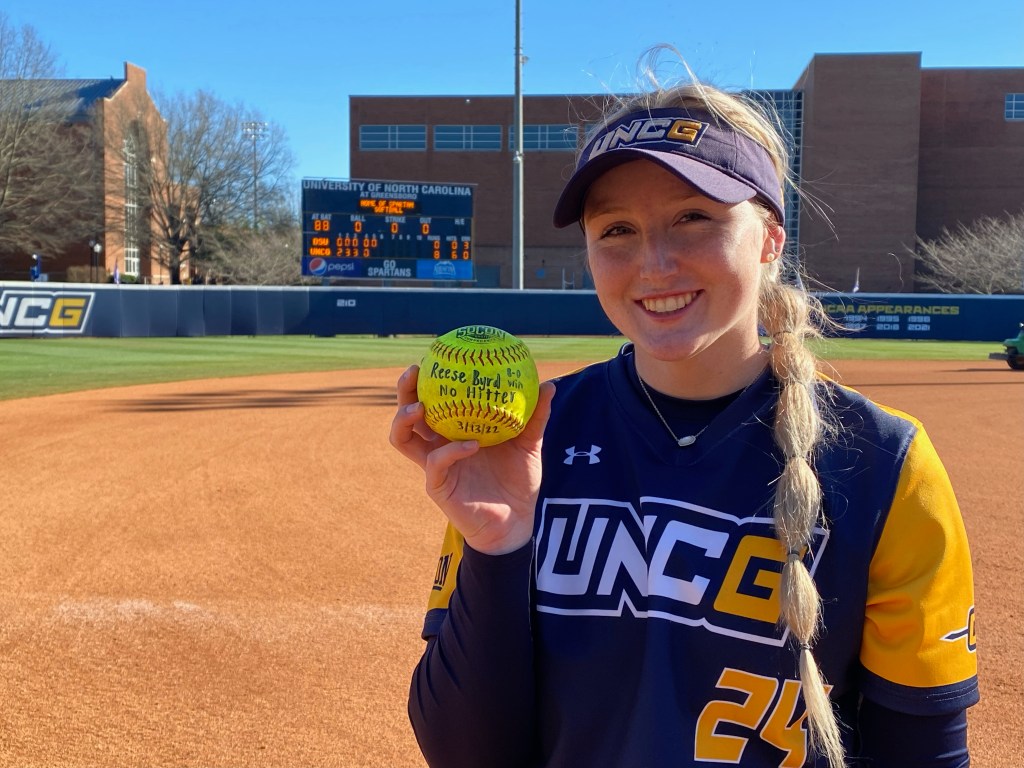 The zeros lined up on the scoreboard, but former Nansemond-Suffolk Academy softball standout and current freshman UNC Greensboro pitcher Reese Byrd had no idea she had pitched a no-hitter – until she was mobbed by her teammates.

Byrd didn’t allow a hit in a five-inning no-hitter in an 8-0 win March 13 over Delaware State.

“I had no clue what was happening until my teammates ran up to me after the game,” Byrd said.

Sophomore Brooklynn Maxwell scooped up a routine ground ball at shortstop in the top of the fifth with two outs, making a line-drive throw to senior Samantha Lagrama at first base to solidify the victory.

The team sprinted out from the dugout and surrounded Byrd, who was casually jogging out to left field following the out. Freshman Jessie Shipley was the first to Byrd, while the rest of the team had giant smiles on their faces.

“I said (to Byrd) ‘Hey, do you know what you just did,’” Shipley said. “She seemed a little confused, and I said ‘NO-NO’. Then she smiled and got excited. It was really cool to watch her do that and I’m super proud of her.”

Byrd struck out five in the victory. She is 4-3 overall in nine appearances and starts with three complete games.

“A no-hitter is a tough feat to accomplish for any pitcher,” said coach Janelle Breneman. “Reese being a freshman makes it very special and is a sign of good things to come. Our defense was solid behind Reese’s ability to shut them down.”

“I didn’t have my best performance in the previous game, so this outing was refreshing,” Byrd said.

Byrd in 2021 helped NSA to Tidewater Conference of Independent Schools and the Virginia Independent Schools Athletic Association Division II championships while the Saints went undefeated. That season, she was also named the conference player of the year and selected first-team all-state.

With UNC Greensboro, Byrd has a 2.93 ERA, the lowest of the Spartans’ pitching staff. She has thrown 40.2 innings, allowed 35 hits and has 20 strikeouts.

“I am so proud of Reese and her performance on the mound on Sunday,” said pitching coach Kendra Kirkhoff. “She took control and showed a lot of confidence with each batter.”

This was the Suffolk, Virginia native’s first collegiate no-hitter. It was also the first for UNCG since Feb. 24, 2018, when Stephanie Bryden, the school’s current volunteer assistant coach, threw an 8-0 five-inning victory against Virginia.

This is the 13th no-hitter in program history.

“My teammates and coaches made it so special and exciting,” Byrd said. “Everyone was really excited for me in the huddle after the game. I’ve thrown a few no-hitters in high school and travel ball, but this one was definitely my favorite.”