‘By the grace of God’: A year after horrific crash on Route 58 couple thankful to be alive 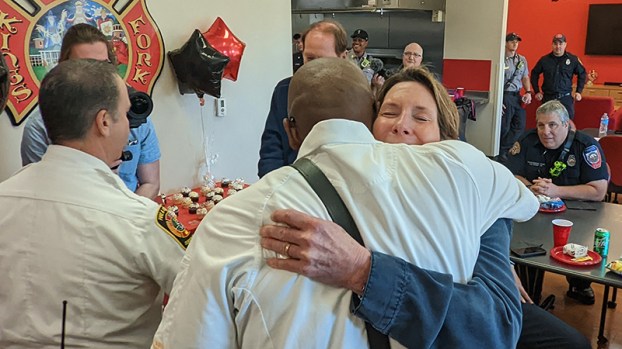 Derby Brackett hugs Suffolk Fire & Rescue Battalion Chief Demitri Wilson at Suffolk Fire Station 6 Sunday. Brackett was there with her husband Doug to thank everyone involved in the effort to rescue them from a March 20, 2021 crash on U.S. Route 58. 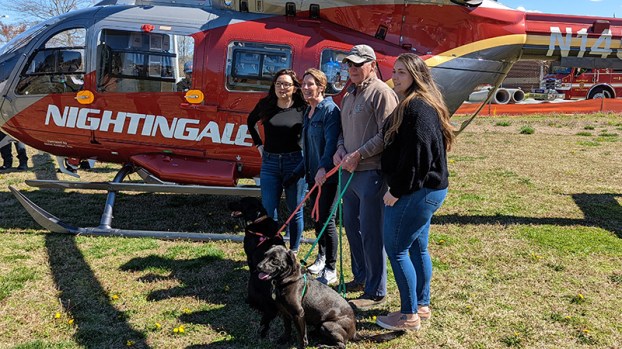 From left, Staci Reyes, Derby Brackett, Doug Brackett and Megan Little stand outside the Nightingale helicopter that was used to take Derby to Sentara Norfolk General Hospital following a March 20, 2021 accident on U.S. Route 58 west near the weigh scales. 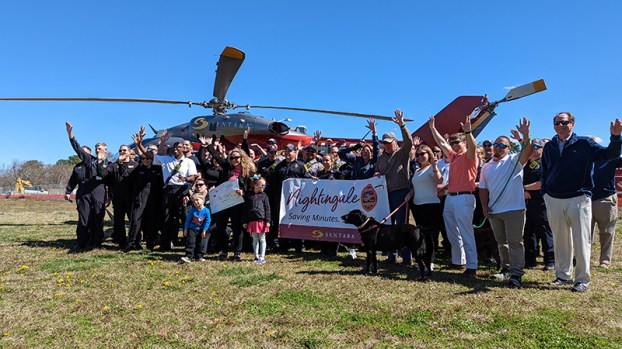 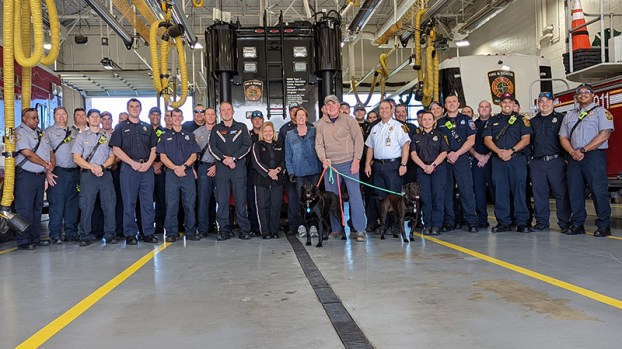 They were on their way to visit a sick relative in Ashland, avoiding the highways because they always liked to take the drives a little slower.

As they often did on such trips, Doug and Derby Brackett, and dogs Rainey Storm and Rambler, headed west from Virginia Beach in their red pickup truck and were on the triumvirate road of U.S. 13, 58 and 460, intending to continue on 460 for much of the duration of their trip to visit his father.

Best friends and nurses Staci Reyes and Megan Little were a few minutes behind the Bracketts, having made a $1,000 Costco run in Norfolk that Saturday morning in March as they were temporarily blending their families together in a Suffolk home.

It was a chilly morning; lows the night before were down around freezing, and it had slowly warmed to about 50 degrees as it approached 1 p.m. But it was clear that day, a year ago March 20, when they and many were making the trek on the familiar road, and one that holds the secrets to many an accident.

Not clear at the time, as Doug was driving Derby and their two dogs past the weigh station, was his vision.

Reyes spotted a dog along the side of the road, near the weigh station driving west.

Let’s stop and get it to safety, they told each other. So they pulled over and headed toward the dog, aiming to get it out of danger and take it to a shelter, when Reyes saw something else they couldn’t have noticed while driving 60 mph on 58 – a vehicle partially submerged in a ravine.

Reyes and Little spotted two other men who had also pulled over and were calling 911.

But no one had yet gotten down the embankment to the pickup truck to see what was going on, so they and one of the men formed a human chain to get a look at the scene.

“We saw the driver first,” Little said, “and we saw that he was awake trying to get out of the car.”

Then they noticed a woman they later learned to be Derby still in the pickup truck. They headed closer to the car as they assessed how they would begin to help those in the car and navigate the water.

“She was yelling for help, so we got down there,” Little said, “We were trying to weigh whether to get in the water or not. I mean, it was a nice day, but you know how cold that water is. It was March. And before we could make that decision, someone slipped and actually pushed her into the water.”

The inadvertent push turned out to be key in helping the Bracketts before first responders arrived.

Reyes went to Derby to try to keep her head above the water, and both she and Little talked to her, as Reyes balanced herself with her left leg on a stump and by holding on to another person’s shoulder in water more than 5 ½ feet deep.

She then wrapped Derby’s right arm in a sweater to keep it out of the water, and someone gave her a belt to use as a tourniquet.

“We realized the extent of her limb injuries,” Little said. “We just did whatever we could do.”

They kept her talking and engaged until more help arrived.

“Her legs were stuck under the dashboard,” Reyes said. “And she was still seatbelted in. The truck was going even more underwater at this point.”

That was when one of the men who had stopped to help jumped on the windshield to try to break the glass, but the pickup truck began to sink further into the water.

“Then it was more just, keep her breathing, keep her conscious and keep us above water,” Reyes said.

“I went, ‘OK,’ and I went to reach for the steering wheel and he was gone,” Derby said.

Doug had a heart attack, and before she could do anything, their car was in a ditch, in water, off of Route 58.

Two people had already stopped to help by the time Reyes and Little approached the ditch full of water where the pickup truck was already partially submerged.

Doug regained consciousness and had started to get himself out of the truck when they arrived.

Little assessed Doug, who they saw with what appeared to be a head wound and him holding his right arm.

“He seemed to be in a state of shock, too,” Little said. “But from the standpoint of, who needs the help first, he was stable, he walked himself up the embankment with help, he could talk to me, he could follow commands. His neurological assessment, at that point, was intact.”

But when first responders arrived, they didn’t realize he had been in the accident.

“They all walked past him, and I was like, ‘No, no, no, no. Someone’s going to have to go to him too,’” Little said. “They didn’t realize at first that he was part of the accident too because he was up there standing up on the side of the road.”

Little let them know that he needed to be assessed, and that he was still in wet clothes and needed something warm.

Derby, however, was pinned inside and would ultimately lose her right arm above the elbow. She also lost two toes on her right foot, broke her hip, pelvis and nose while suffering other injuries, including an infection from the ditch water that had her on antibiotics for several weeks.

Derby didn’t know the extent of her injuries in that moment as she was partially submerged in the water, trapped in their truck and calling out for the help that was there in the instant after the crash.

She began to hear voices – the voices of Reyes, Little and many others.

Lifesaving voices, she called them.

“Those voices are what kept me going,” Derby said, “because I was in water in the ravine up to my neck, which was scary for me at that time, anyway. My dog, my little dog Rambler, was still in the truck with me. I remember talking to him. But the voices reassuring me that they were going to take care of me, and that they were going to get me out, I believed them. I had to believe them. I knew I could believe them.”

And those voices, as first responders began to arrive, understood the severity of what had happened just minutes earlier.

Reyes and Little asked if Derby could feel her legs, and when she indicated that she could, they cut off her seatbelt, but as the pickup continued to sink in the water, she still could not get out of it on her own.

So all they could do was try to keep Derby’s head and arm above the water, and keep her awake.

“But you could tell Derby was going into shock between the water temperature and the adrenaline of the accident, a loss of a limb,” Little said.

“It was a nice day. We were in leggings and t-shirts,” Little said. “So she was freezing.”

Derby was conscious through it all as she heard first responders from Suffolk and Chesapeake using the jaws of life to get her out of the truck, and as the Nightingale Regional Air Ambulance helicopter arrived to take her to Sentara Norfolk General Hospital, she heard that too.

“They started my life again,” Derby said of the first responders and Sentara Healthcare doctors and nurses. “And I know that it wasn’t about me. It’s about the work that they do every day for all the folks in the community.”

While she flew by Nightingale to Sentara Norfolk General Hospital, Doug was taken by Suffolk emergency medical services to the hospital. In their minds, the months of recovery for both of them began as first responders were still helping them on the scene.

She was determined to walk again, and she is. She spent more than three months in a wheelchair and started physical therapy in July. Doug, after his heart episode, has a defibrillator and is under the care of Sentara’s cardiac surgeons.

The rescue was a coordinated effort, and it began with the Bracketts’ dog, Rainey Storm, walking alongside the road, getting the attention of passers-by.

In 29 years in the fire service, Suffolk Fire Chief Mike Barakey said this was the first time they received this kind of closure.

“We call it closure,” Barakey said. “A lot of times when we take care of a patient, or we’re at a fire in a building, when we leave, or pick up we call it, or leave the scene, we don’t have any follow-up. So to have the Brackett family come out a year later, to the date of the crash, bring themselves, their family, their dogs, it brings a lot of closure to the guys, a lot of satisfaction for the job that we do and that they do, so it’s just really nice to have that closure from the family. It just goes to show that when we clear a scene, or we leave a scene, that life continues, and these patients, or these people, want to come and meet their responders, and we really appreciate them doing that.”

For Reyes and Little, the day is one they still talk and think about.

“It was a blur at first,” Little said. “When we got back, we had to walk each other through what actually happened.”

Derby said she continues to be filled with gratitude for everyone who helped her, her husband and their dogs. While Rainey Storm ran along the road – likely jumping out of the pickup – Rambler stayed with Derby throughout the rescue.

“The fact that I’m standing here today, it’s really by the grace of God,” Derby said. “I think it’s healing. It’s been a journey. It’s been a long journey for me. being able to see them and connect with what happened. The trauma of that day makes it healing for me and makes the hope that much more real.”