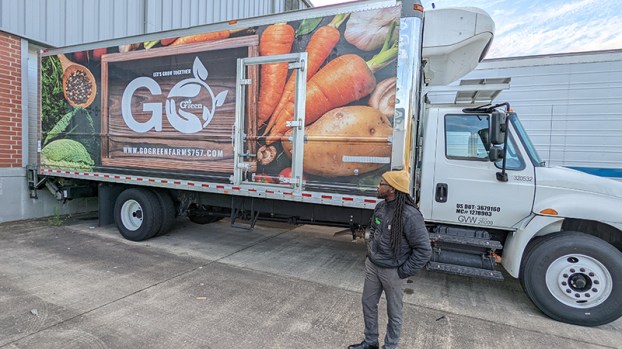 Breon Clemons is a Suffolk native and owner of GoGreen Farms and Greenhouses. 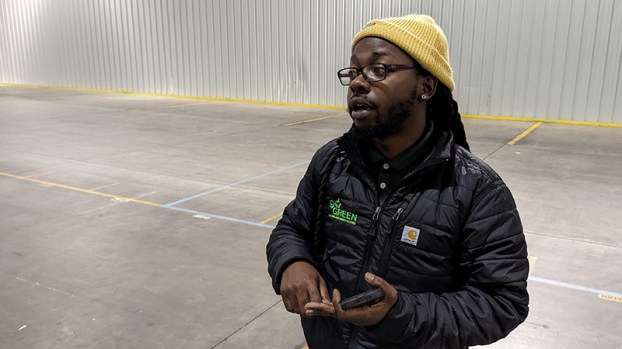 Breon Clemons started GoGreen Farms and Greenhouses in 2019, and in just three years has expanded his food hub and farm agribusiness from a small, 5,000-square-foot Portsmouth warehouse into a much larger, roughly 70,000-square-foot one just off of Pruden Boulevard in Suffolk’s Virginia Regional Commerce Park.

His business started out servicing just one school district, and from there it has built up to the point where it services upwards of 300,000 students across Virginia — more than 200 schools in nine school divisions — now with farm-to-table food. He partners with 20 farms, including his own and provides that food to not only schools, but also hospitals, retailers, restaurants, food banks and partner distributors.

“Imagine my company being like Sysco, but totally different,” Clemons says. “My biggest competitor is Sysco, so I bid against them on contracts all the time.”
Clemons, a Suffolk native and a Nansemond River High School graduate who studied urban agriculture in college, wants to have an impact in his hometown, and beyond. That’s a big reason why he came back to Suffolk, and he gives a big assist to the city for its help.

“I’m from here (and) I want to impact the whole region, so that’s what we’re doing,” Clemons says. “We’re a nonprofit that owns a for-profit.”

He compares the business model to Amazon, or a hospital that operates as a nonprofit but has subsidiary for-profit companies that allow it to do for-profit things. He saw a need to create more links between small farms and institutions wanting local food.

“We had to do the same thing because we started growing too big, and some of the things started not lining up with the non-profit mission,” Clemons says. “So we had to transition over.”

His business builds school gardens and community gardens, which he says separates them from a typical food company.

“We’re a food hub,” Clemons says. “So as a food hub, we aggregate for local and regional farmers. That is how I’m able to compete with the likes of U.S. Foods and Sysco because I’m able to have the capacity, first and foremost. But then, how they can’t compete is I have local, fresh regional food, and my cost is pretty much the same, and that’s how we’re able to compete.”

But he has a personal reason for wanting to grow his business — his daughter.
“That was what made me start, my daughter growing up,” Clemons says. “I’m a fifth-generation farmer, so growing up, all I knew was fresh produce, and that’s all she’s ever known. I have a nice huge garden at my home. It made me realize, she’s about to be 3 — this is a while ago. She’s about to be 3 at the time, and it’s like, ‘Man, do I want to put her in public schools, but they eat like trash. Then it had me thinking, ‘Maybe I could figure out how to put local produce into school systems.”

Clemons did his research and studied procurement laws, and his business took off from there. He says he took his fresh produce to major school districts, offering a product he describes as “second to none,” and has grown. But he said as a small business, he and his employees provide a personal touch to their customers.

“I mean, imagine being able to get collard greens, right, picked on a Saturday, and we pick them up on a Sunday and then they go right to a school system on a Monday,” Clemons says. “Super fresh versus, let’s just say, Sysco might deliver to Walmart, right? Those apples probably took two weeks before they got to Walmart, being through Sysco’s chain, just because of where they’re sourcing them from, the travel time, things like that. And by the time you put it in your mouth, the apple may be two weeks old. You don’t even know it. The taste, the look, it’s a lot different.”

His new warehouse will store food items briefly before they are sent by truck to clients across the state. And while locally-sourced produce is important to Clemons, he’s branched out.

“My competitors, some people like to call my company a monopoly crusher, because I pretty much expose what these big corporations are doing,” Clemons says. “I’m able to let them know what’s going on, where their products are coming from.”

And, at the same time, be able to provide it for them at a more competitive price.
“I’m all about the volume,” Clemons says. “I could care less about the price because volume equals to the same thing. I’m all about just trying to service the entire community as a whole, impacting them the right way, not really, more or less, chasing a dollar.”

With the goal of directly impacting lives, Clemons and his employees feel empowered as he fosters a family atmosphere among them.

They provide a personal touch with customers as GoGreen aims for a greater impact across the region and state. Their goal is to impact the young. It’s why Clemons has brought his company to schools and school divisions.

“Nine times out of 10, when the kid comes home, they’re going to bring something home and the parents are going to wonder where you’d learn that from,” Clemons says. “That’s going to translate to the next generation.”

His daughter certainly knows where her food comes from — she sees his company’s trucks at her school — and so does Clemons, and that fills him with pride as he says, with a chuckle: