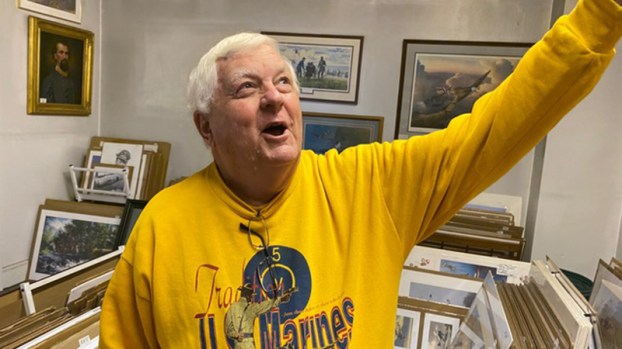 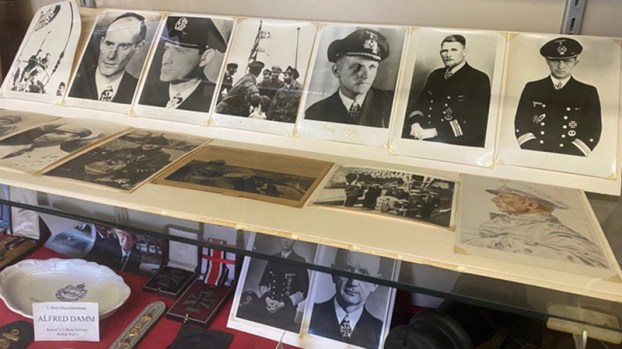 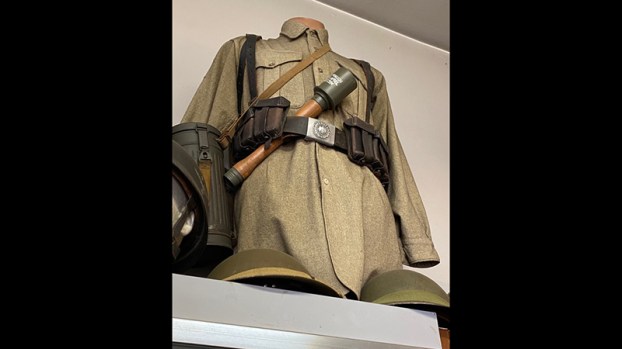 an example of the military artifacts on display. 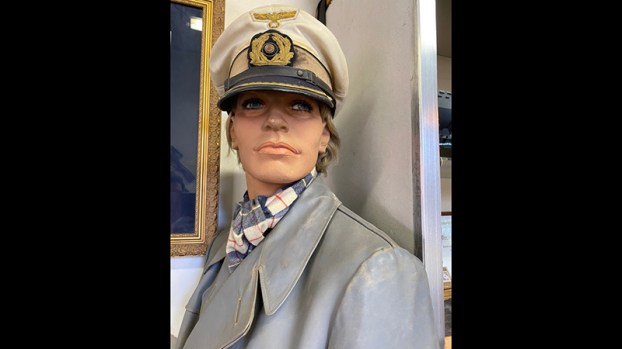 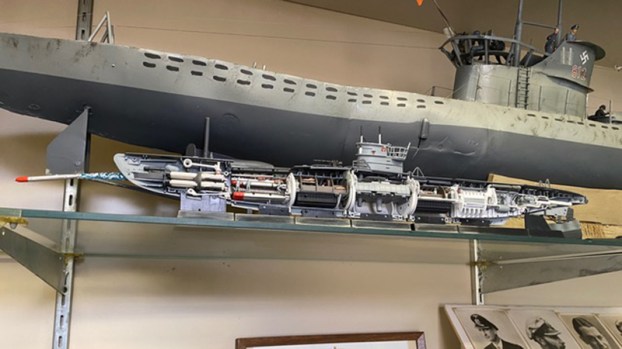 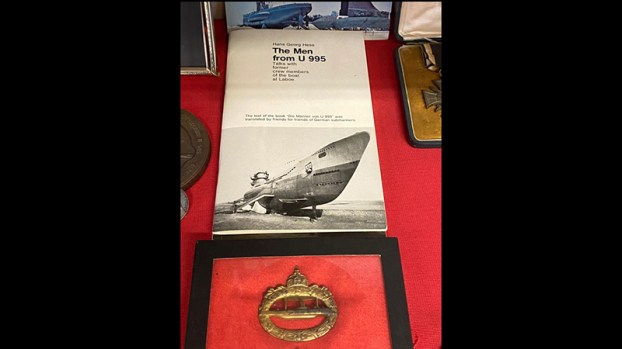 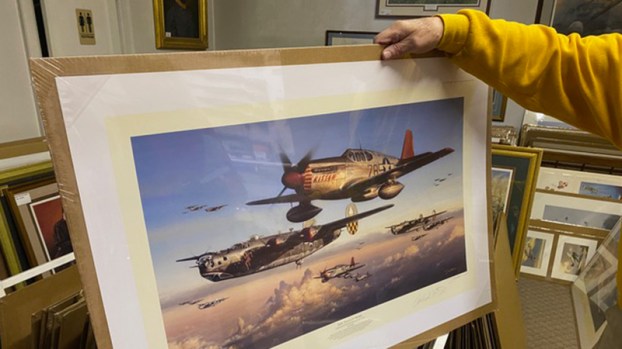 Salute to the Tuskegee Airmen by John Shaw is among the featured artwork. 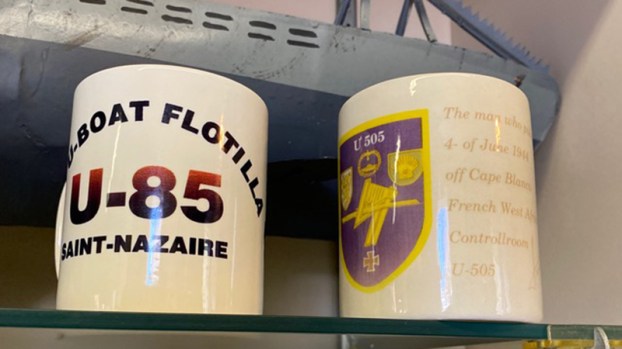 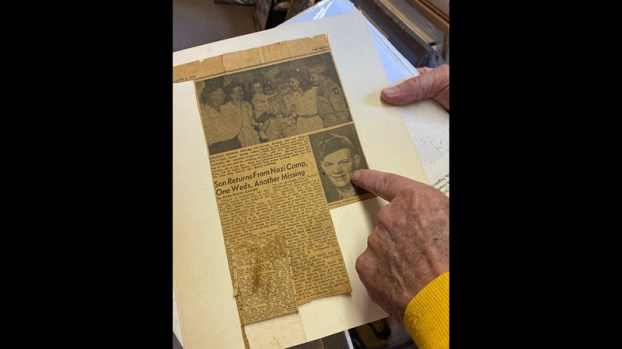 Richard Carroll's love of military history has roots in his own family's war service. 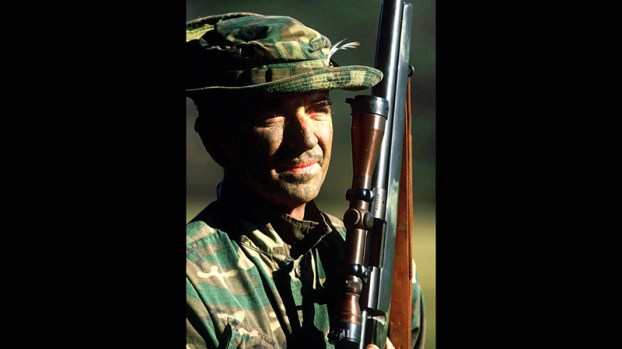 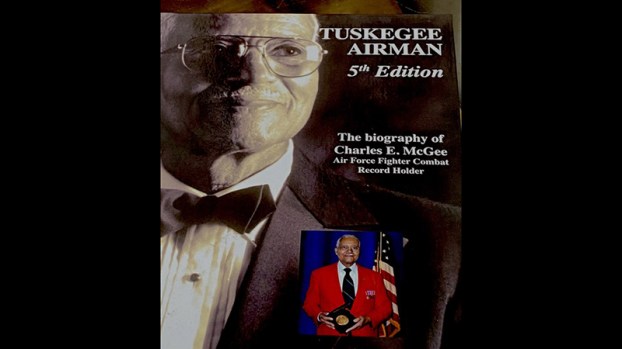 When is a gun shop more than a gun shop? When it is also a micro-museum of military history, housing artifacts and mementoes ranging from the Civil War to the Vietnam conflict. Uniforms, mess kits and other military paraphernalia crowd the shop floor, inviting visitors to look, ask and learn. The display pieces each have their own story — stories that shop owner Richard R. Carroll is happy to share.

Southern Gun Works on South Main Street is also something of a bookstore, with new and vintage books of military history, some autographed, from Colin Powell to Stalin’s Eagles. Hundreds of military art prints by well-known artists including John Shaw and Mort Kunstler stand in stacks along the walls.

While Carroll, a retired U.S. Marine, is well known as a dealer in contemporary and collectible firearms, his real love lies in history. His obsession with military history springs from his own family story and that of his father and two uncles who served in World War II.

His father, Pfc. Richard A. Carrroll, served with the 101st AirBorne and suffered severe wounds on Christmas Day 1944 at Bastogne in the Battle of the Bulge. Just 23 and recently married, he was medically discharged in September 1945.

His older brother, Harry, a waist gunner, survived when his B-27 went down a few miles outside of Rome, Italy, but spent 20 months in Stalag 17B, a German prison camp. Upon release, he continued to serve in both the Army and the Air Force.

In March 1945, Tom, the youngest brother, had been less than 30 days in a German combat area, when the family learned he was missing in action. Three years later, his remains arrived to be buried in Norfolk.

Pfc. Richard Carroll and his wife divorced when their son, Richard R. Carroll, was very young, and from his 11th birthday, the boy grew up without his father in his life. A desire burned within him, however, to learn more about his father and uncles and their role in the military. That quest, the people it led him to and his own 30-year career in the Marines fueled the younger Carroll’s interest in wider military history. Southern Gun Works reflects the diverse history he has encountered over the years.

Mike Coughlin, who worked in the shop when it was Classic Firearms, stayed to work for Carroll when he bought and renovated the business almost 30 years ago. Today, Coughlin is well versed in not only firearms, but also the military displays lining the front half of the shop.

In recent years, stories with a local connection surfaced about World War II submarine warfare — the threat to the East Coast, including Norfolk, Virginia Beach and the Outer Banks — and the heroism of the Merchant Marine captains and crew, many from Gwynn’s Island and Mathews County, who dodged Nazi U-boats to deliver troops, equipment and supplies to Allied troops in Europe.

Carroll’s own fascination with submarines grew as he met retired U.S. and U-boat submariners and collected their stories and photos as well as memorabilia displayed in the shop. A coffee mug that belonged to Hans Goebler. who served in a U-boat control room, reminds Carroll that when Goebler was captured and sent to work as a prisoner of wra on a Louisiana cotton farm, the elderly farm couple took a liking to him and, according to Goebler, offered to bequeath the farm to him. Goebler, however, preferred the sea to the farm.

Another U-boat crew member created a large scrap-art model of a U-boat on display in the same case. He later became an ophthalmologist in the United States in the 1950s.

Carroll’s interests go beyond submarines. One of the John Shaw paintings in the shop illustrates the story of a German ace Luftwaffe pilot, Franz Stigler, and a 21-year old American pilot, Charlie Brown, who met in the skies over Germany in 1943. Brown’s plane, badly damaged in a bombing mission, seemed likely to crash as it flew toward England. The fuselage was so badly ripped apart that Stigler could see wounded crew members aboard. When Brown refused to surrender, Stigler disregarded protocol and instead of shooting down the plane, flew next to the B-17 Flying Fortress, escorting it safely out of range,

Years later, in the 1980s, a grateful Brown finally tracked down Stigler. The two pilots reunited and became good friends.

Another display pays tribute to Carlos “Gunny” Hathcock, the Arkansas farm boy who became the premier U.S. Marine sniper in Vietnam. Known as Long Tra’ng or White Feather for the feather he kept tucked into his hat, Hathcock had 93 confirmed kills, an enemy bounty on his head and a mission to train other U.S. snipers.

Hathcock semi-recovered from serious burns suffered when rescuing seven fellow Marines from an anti-tank mine explosion in 1969, but a few years later, multiple sclerosis forced his retirement from the Marines. He settled in Virginia Beach and worked with local law enforcement, training snipers and swat teams until his death in 1999.

Because Hathcock knew both photographer John Sheally and Carroll well, his family donated items displayed in the shop.

Another of Carroll’s acquaintances, Brig. Gen. Charles Edward McGee, an American fighter pilot and one of the last members of the Tuskegee Airmen, passed away in Bethesda, Maryland, in January, but his story lives on in his biography in the collection of military history books in the shop.

Seven years ago, Carroll, home from the shop and relaxing with his wife on their deck, saw a pair of doves flying over. One dove swooped down and landed on Carroll’s head.

“No one will believe this,” Carroll said as his wife shot a photo. The bird flew off but retuned the next day and the next, until one day the dove, badly injured, crash-landed on the deck. The Carrolls rushed the dove, by then named Petey, to the vet, who told them Petey, unable to fly far, could not survive in the wild.

Once recovered, Petey moved in with the Carrolls. He has a large cage, but also has the run, or rather the flight, of the house and still perches on Carroll’s head or shoulder. Maybe Petey is a sign of peace for a man who has spent his life honoring the military.