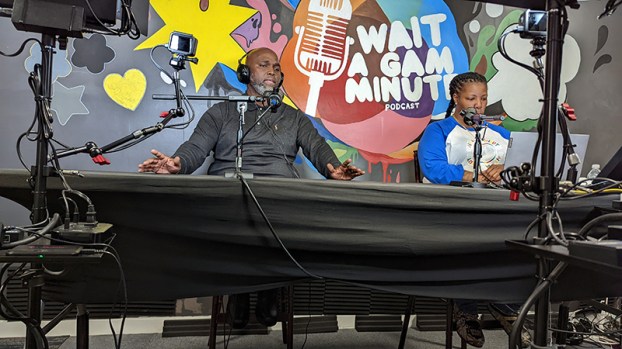 Trivelle Gambrell, top right, with her brother Dejuan Gambrell during a recording of her Wait a Gam Minute podcast in her East Washington Street studio, which has room for guests to listen in on the live recording of the show. 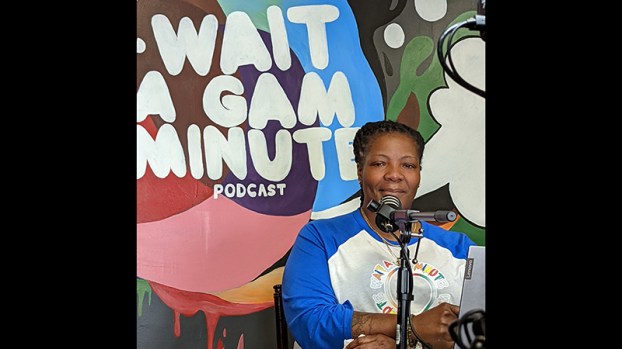 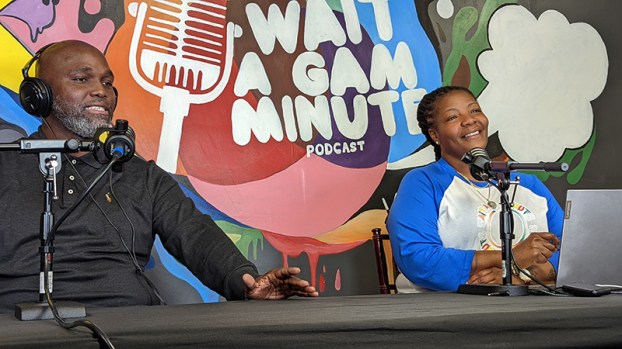 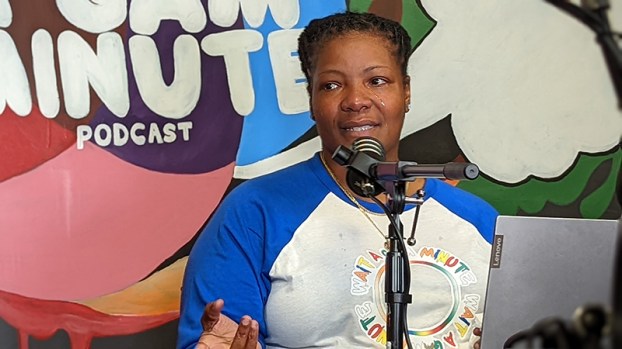 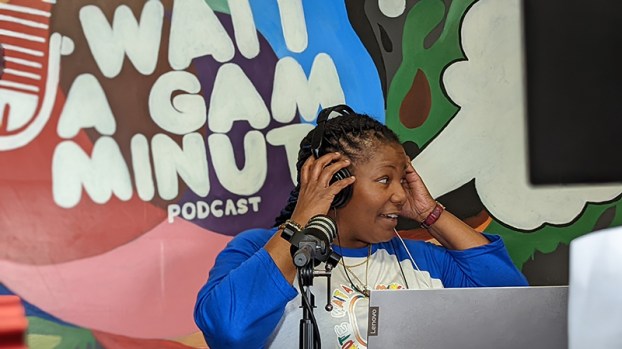 Wait a Gam Minute podcast host Trivelle Gambrell looks to her executive producer, Shante’ “Mz. Gogetta” Hall, not pictured, during a recording of one of the shows. Gambrell describes the podcast, which comes out twice per week, as “unapologetic and unfiltered.” 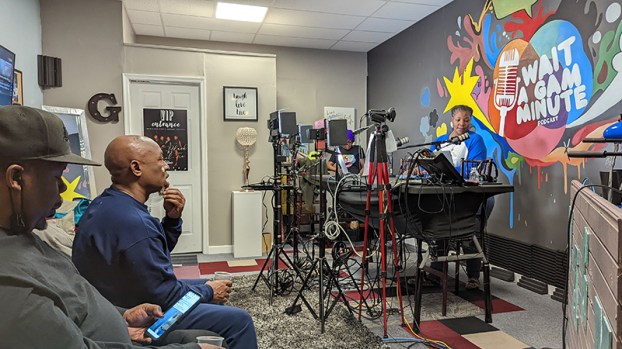 Wait a Gam Minute host is as “Good As Me.”

The warm and cozy feeling you get when you step inside Trivelle Gambrell’s East Washington Street studio gives way to some heavy air as she and her brother begin to discuss their father on her Wait a Gam Minute podcast.

It didn’t take a “Gam” minute to realize the emotional weight of the discussion, but while it was helpful for her to have it, Gambrell hopes it, and the topics she covers, will be helpful to her listeners, and yes, viewers. Those who tuned in not only heard the emotion behind the discussion, but also saw the tears streaming down her face.

“I actually love podcasting,” Gambrell says. “I actually love meeting people — the relationships and connections that are built. And the episodes always seem to turn. We could be talking about something, but it always seems to turn into something for somebody else, and just about inspiring people. I want people to listen to the episodes and learn something and feel inspired because we’re talking about everything, healthy conversation, although we’re unapologetic and unfiltered.”

Her show — she describes it as a talk show, interview-ish type podcast — comes twice a week and can be found on all major podcast platforms and on YouTube, and has been going strong since April 2020. She named the show “Wait a Gam Minute,” not after the expression with a more profane word that rhymes with Gam. Rather, Gam is taken from her last name, Gambrell. Gam, she notes, is also short for “good as me.”

Gambrell, who also manages a home health care company and is a photographer, describes her initial shows as “garbage,” but with more shows, she’s realized that, “Oh, there’s something here.”

Gambrell finds her guests and her topics organically, occasionally surveying her followers on social media, and then she learns what each guest is comfortable talking about. She usually books her guests about a month in advance.

“I don’t want somebody to come and they not be themselves,” Gambrell says.
When she asked her brother to come on the podcast to talk about their father in a recent episode titled “Fatherless,” there was no hesitancy on his part to share. Her father, though, did not want to be on the show.

“He was pretty much forthcoming with it,” Gambrell says of her brother. “And I did reach out to our father as well, and he declined.”

But most people feel comfortable talking with Gambrell, and though she describes herself as an introvert, she is comfortable behind the mic and getting her guests to open up; in other words, as her show description puts it, they “often talk about everything issues with everyday people.”

And reviews from listeners indicate they’re getting the point of the show — “great banter and a fun listen!,” one review says while another uses fire emojis while saying “this podcast got the sauce.”

“It has evolved a whole lot, actually, from when I first started until now,” Gambrell says. “It has turned a lot. I’ll be honest, it turned a lot because I was doing it my way, and I had to realize that I had to do it — I had to be in alignment with God. Once I did that, it turned. We’ve interviewed celebrities and everything, and it’s always a yes. Things just seem to keep going and … fall into place.”

She has high hopes for the show’s future.

“I want to see it go to syndicated radio,” Gambrell says, “and just continue to be a positive brand, a household brand, and television, conferences, shows, you name it.”

Just Wait a Gam Minute, and you’ll surely find her.