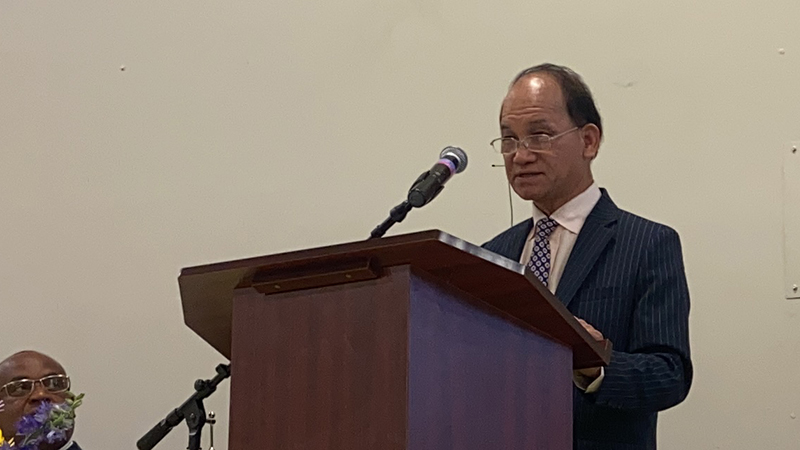 Henry Fahman, chairman and CEO of Philux Global Funds, gave his story of being imprisoned in Vietnam and how God remained faithful at the 2021 Suffolk Leadership Prayer Breakfast.

The 38th annual Suffolk Leadership Prayer Breakfast will be held at 7 a.m. Thursday, May 5, at The Liberty Center.

The breakfast, originally held in October during the Peanut Festival, is now held concurrently with the National Day of Prayer on the first Thursday in May.

“Because of the importance of coming together for this event, and the great need for prayer in our country today more than ever for our families and our city, our state, our nation and the world, it is time to come together to thank God and to pray,” said organizer Dr. Bill Jackson.

The U.S. Senate and House of Representatives Breakfast Group inaugurated the National Prayer Breakfast 70 years ago to “seek God’s guidance as well as to reaffirm their Faith in God, His plan and purposes.”

It continues to be held annually in Washington, hosted by members of Congress. Every U.S. president since Dwight D. Eisenhower has participated in the event.

“The 2022 audience is sure not to be disappointed with this year’s selection,” Jackson said.

The Liberty Center is located on Godwin Boulevard at Centrebrooke Lane and Roman Road.

Businesses and leaders may purchase tables of 8 seats for $160.00 for customers and/or employees and constituents.  Individual tickets are available for $20. per person.

Because the breakfast usually sells out quickly, interested persons are encouraged to purchase their tickets early. Exact change is required if paying by cash. Tickets will not be available at the door.