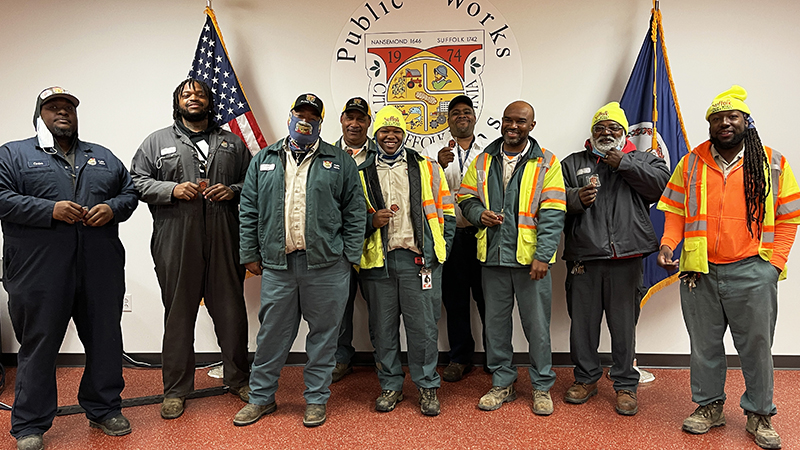 Ten employees from Suffolk Public Works were recognized with Challenge Coins for their help during a February fire in the 100 block of Bell Street.

Challenge Coins are a tradition in fire service for citizens or employees as a token of appreciation or respect. They are sometimes given to people who stop to help with a car accident or employees who go the extra mile in a crisis.

When a commercial fire at Rillco Inc. was reported at 1:17 p.m. on Feb. 25, the Public Works Department was instructed to redirect traffic and put out signs, which crews regularly do as part of their job. However, most of the time, they don’t get close to the fires.

As firefighters put out the fire, they found a hot spot behind a wall that they could not access. They asked the Public Works employees to help out with their backhoe to tear down the wall.

“We do a lot and I don’t feel like this call was all that special,” said Thomas Roberts, a Public Works operations superintendent. “We’re all one team and one family and have each other’s back. We just happened to be the ones to answer the call that day.”

Fire Chief Michael Barakey was impressed with what he saw.

“It was so well done,” he said. “It was almost artistic how they did it with the backhoe. They never complained once. I just told them what I wanted done and they did it.”

After the wall was taken down, firefighters were able to safely enter the building and put out the fire.

“It feels good to be recognized because we do a lot of work with the fire department and police,” said Bullock, a labor supervisor.