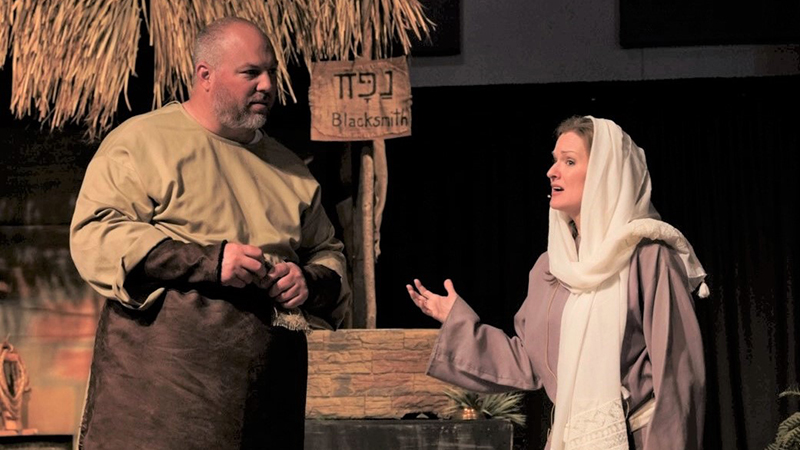 Mary Magdalene, played by Allison Carr, talks with Cliva the blacksmith, played by Jason Thompson, about how there is more to following God than just keeping rules.

With COVID-19 restrictions no longer in place, a Suffolk church’s annual Easter play is back to full-scale production.

The play takes place during Passover, the year Jesus was crucified. The story follows four characters and their reactions to the Gospel as they hear Jesus speak in Jerusalem. Each of the four main characters portrays one of the four soils taught in Jesus’ parable of the sower in Matthew 13, which illustrates the different reactions people have to the Gospel.

Southside Baptist Church holds original plays every year for Easter and Christmas. The plays pull from current events and Bible stories to give a unique perspective on stories many have heard before.

“This is an original work, heavily drawn upon from the Biblical telling of the week Christ spent in Jerusalem leading up to His crucifixion and resurrection,” said Ernie Chenault, creator of the play. “The play was originally going to focus on just the carpenter and the blacksmith, but as the story developed, I decided to broaden to four characters based on a recent reading of The Parable of The Soils, also known as The Parable of The Sower.”

Due to the COVID-19 pandemic, the productions the past two years have been greatly scaled back to follow health regulations. However, this year the production is back to full scale with more staging and props to add depth and context to the story.

“In addition to more elaborate staging, the choir has also been integrated into the production so songs can be performed at appropriate times to help tell the story,” said Chenault. “This is the first time the choir and drama team have significantly worked together in two years.”

The primary actors for this play include many who have participated in past performances along with some new talent. Jason Thompson plays Cliva, the blacksmith, with his real-life wife, Evy Thompson, also playing his onstage wife, Fedina. Other veterans include Rachel Ellis as Dolcie, Allison Carr as Mary Magdalene, Josh Butts as Jesus, Matt Geurts as Galetus and Nathan Carr as Piqute. Newcomers include Will Weissner as Macre and Stephen Butler as Stovis. According to Chenault, many key scenes feature strong acting from the cast.