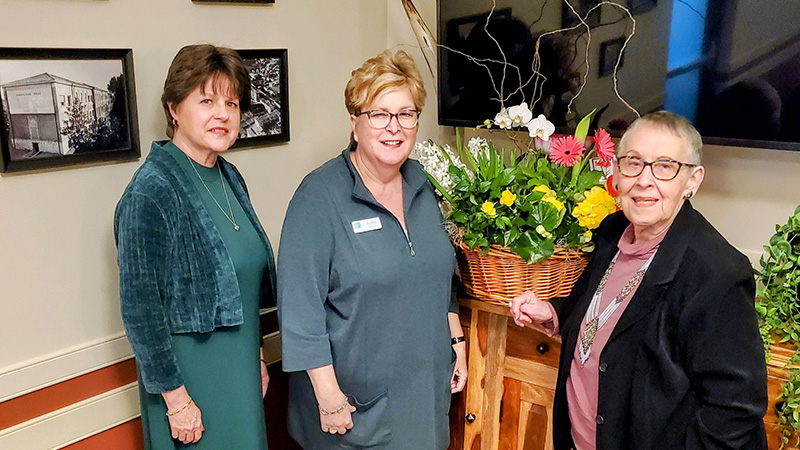 This is the first “Women of Achievement Award” to be awarded by the organization.

“She has dedicated her life to the advancement of others and paved the way for the leaders of tomorrow,” the organization said in a news release. “Dot is recognized as an ambassador for women through her extraordinary dedication, personal achievements and service to others through mentorship, philanthropy and business.

“Dot has been a public servant and savvy business woman her whole adult life, starting as a young woman trying to make her way in the computer software business in ‘60s New York City. She recalled a time in her career where there were no other female colleagues to lean on and support each other the way Suffolk Business Women is able to. Dot expressed the joy she felt from knowing that there are so many entrepreneurial women who are now able to flourish in the business world and support each other like never before, and encouraged older professionals to be mentors to the younger generation.”

Later in her life, she moved to Virginia and quickly got to work helping the local community “how she – and most importantly, God – saw fit.”

“She listens and goes where the Lord leads her, which has inspired ministry and charitable work with local groups and projects such as Impact Suffolk, March for Jesus, Virginia Prayer Network, Mattanock Town, Thanksgiving food drives and much more,” the news release states.

In 2021, Dalton wrote “Rekindle Virginia: The Flames of Revival,” a book that looks at the historical significance of Virginia as the “Eastern Gate” in the rise of Christianity and revival in America. Her book is available on Amazon and at Barnes and Noble.

While researching and compiling information for her book, she felt an “unmistakable divine calling” for a modern tent revival in Virginia, specifically Suffolk.

“She worked tirelessly from start to finish – business plan to execution – to erect a grand, three-day tent revival in October of 2021,” the news release states. “She had planned to ‘retire’ after the big tent revival, but feels God’s not quite done with her (or Suffolk) yet.”

The group said Dalton possesses “many of the qualities that Suffolk Business Women aspire to have and aim to be like – smart, resilient, generous and kind-hearted, with a strong calling for community involvement and charity work. Dot has filled her years with benevolent projects, all the while praising God and following where He leads. She is truly an inspiration to Suffolk Business Women and a blessing to everyone she meets.”