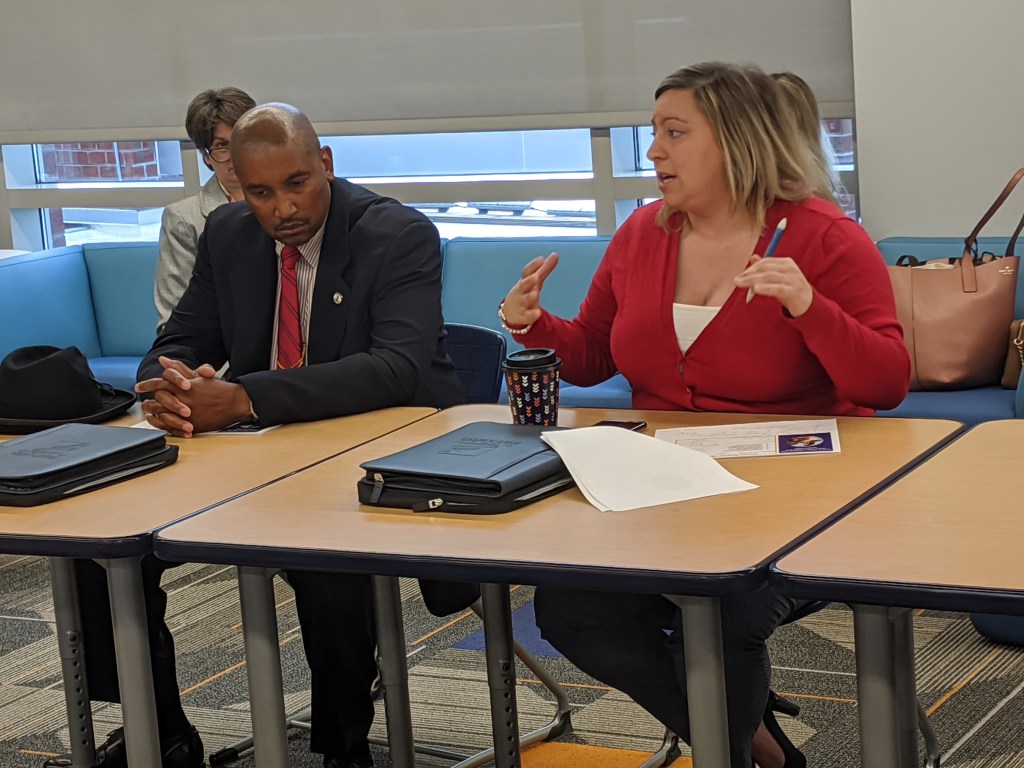 Democrat Del. Clinton Jenkins, left, who represents the 76th District in the House of Delegates, and Republican Del. Emily Brewer, who represents the 64th District, will be running to represent the newly-created 17th District in the state Senate. The two appeared together in December 2019 with members of the Suffolk School Board and City Council at Col. Fred Cherry Middle School in North Suffolk to hear the board and Superintendent Dr. John B. Gordon III share the division’s successes and challenges. Jimmy LaRoue file photo

State Del. Clinton Jenkins, who represents Suffolk as part of the 76th District in the House of Delegates, has announced his intention to run for the newly created 17th District Senate seat in 2023, setting up a potential matchup with another current delegate, Republican Emily Brewer.

Jenkins, a Democrat, announced his candidacy in a recent tweet.

“Today, I am announcing my candidacy for the newly-drawn 17th Virginia State Senate District,” Jenkins said. “We must continue to push forward and continue to build a better Virginia.”

Jenkins defeated Republican Chris Jones in 2019 for the 76th District seat, winning about 56% of the vote, then won reelection in 2021 against Mike Dillender, receiving 53.25% of the vote.

Jenkins serves on the Counties Cities and Towns Committee, the Public Safety Committee and the General Laws Committee.

Reached Wednesday, Jenkins confirmed that he is running for the state Senate seat against Brewer, though they would each have to win their respective party’s nomination before that could happen.

“I’ve really enjoyed working with her, and regardless of the results of the election, I hope that we continue to work together,” Jenkins said.

Brewer announced her candidacy for the state Senate seat Jan. 18. In November, she defeated Democrat Michael Drewry, who serves on the Surry County Board of Supervisors, for reelection to the 64th District seat, taking nearly 65% of the vote. That district includes parts of Suffolk and Isle of Wight, Surry and Prince George counties.

She won her first race for the 64th District delegate seat in 2017, taking more than 62% of the vote against Democrat Rebecca Colaw to become the youngest Republican woman, then age 33, to be elected to the General Assembly, and two years later topped Michele Joyce, winning more than 60% of the vote.

Suffolk makes up 41.7% of the electorate in the newly drawn district.

Brewer, first elected to the House of Delegates in 2017, serves as chair of the House Communications, Technology and Innovation Committee and is a member of the House Appropriations and House General Laws committees. She recently was chosen as a House conferee to negotiate with the Senate on a new state budget.

“Serving in the House has been one of the great honors of my life,” Brewer said in a news release announcing her intention to run for state Senate. “I am proud of what I have accomplished with my colleagues to improve broadband access and stand with law enforcement. I have opposed costly tax hikes, advocated for Virginia’s children and stood up for our values in Richmond.

“In the Senate, I will stand up for life, the Second Amendment and traditional values. I look forward to the campaign and working to earn the support of the 17th District.”