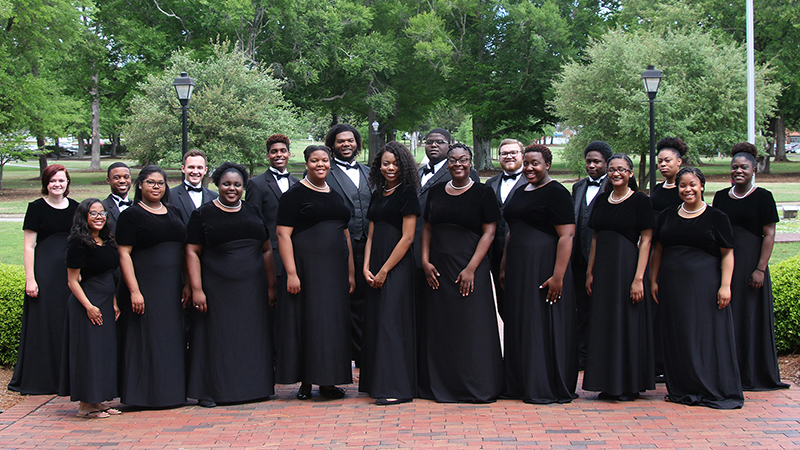 Chowan Singers to perform at SCCA

The Chowan University Singers will present a Spring Concert at the Suffolk Center for Cultural Arts next weekend.

The Boys Choir of Hampton Roads also will perform. Tickets are $10 for the concert, which begins at 3:30 p.m. Sunday in SCCA’s Birdsong Theater.

The Chowan Singers will perform several classic choral masterworks ranging in style from classical a cappella music to contemporary gospel like “The Lord Bless You and Keep You.” Their performance will feature “Gloria” in D Major, by Antonio Vivaldi.

In March, the Chowan Singers participated in a three-day residency at Carnegie Hall with 200 singers from schools across the nation. They performed “Gloria” in Carnegie Hall’s Stern Auditorium.

The Chowan University Singers are under the direction of Dr. Benjamin Thorburn, director of choral activities and associate professor of music at Chowan. Thorburn holds degrees from the University of Rochester and Yale University. The Chowan Singers is a select ensemble that consists of 18 students and includes accompaniment by a seven-piece orchestra featuring violins, viola, violoncello, oboe, trumpet and organ.

The Boys Choir of Hampton Roads will perform seven selections: “A Jubilant Gloria,” “Lord, Make Me an Instrument of Thy Peace,” “Kyrie,” “My Lord, What A Morning,” “Make Them Hear You,” “Total Praise” and “We’re the Men.”

The choir is directed by Julius E. McCullough, a highly regarded music educator, performer and music clinician. The choir has performed throughout the country, including in Dallas, Nashville, Washington, D.C. and Chicago.

The Boys Choir of Hampton Roads, formerly Park Place Boys Choir, was organized in September 1997 as a resource for boys in the Park Place area of Norfolk, to expand their positive image through singing. Geraldine T. Boone is the founder and serves as its accompanist. The choir’s mission is to “develop in each young singer a self-respect and respect for others based upon clearly stated and solidly proven values, while striving for excellence in academics and cultural personal pursuits.”

Tickets may be purchased at www.SuffolkCenter.org or by calling 757-923-0003. The Suffolk Center for Cultural Arts is located at 110 W. Finney Ave.

‘Growing Up Suffolk’ set for Saturday

Seaboard Coastline Trail to get money to expand