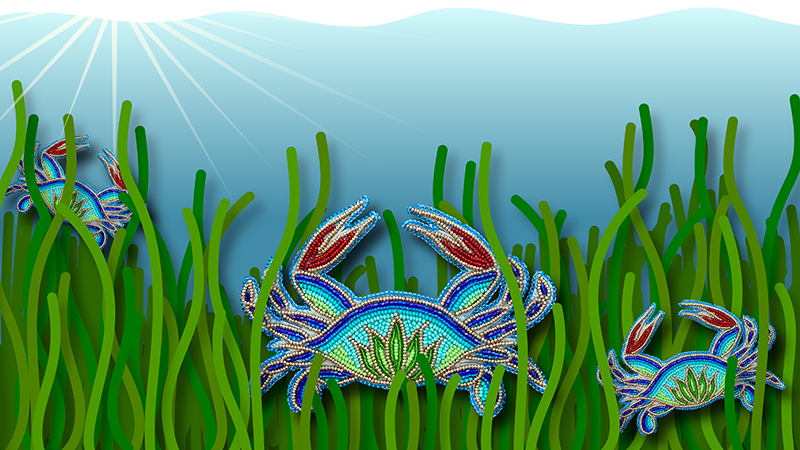 Many images illustrate the story of “Indigenous Life on the Nansemond River” including a custom graphic of beaded crabs in seagrass which placed culturally-significant beadwork within an ecological setting.

The Nansemond Indian Nation is nominated for a Webby Award for its StoryMap “Indigenous Life on the Nansemond River.”

The StoryMap, which can be viewed at tinyurl.com/StoryMap2022, has been nominated along with five other sites, including one from NASA, for a Webby Award in the Sustainable and Environmental category of general websites and mobile sites. The Webby Awards recognize “the best of the internet” as people go online and vote for their favorites to win. Voting closes on Thursday at tinyurl.com/VoteNRWebby2022.

“It’s exciting,” said Nikki Bass, author of the StoryMap and member of the tribe. “We are a small tribe and with this global recognition, many people are hearing about us for the first time. “

The site outlines the story of the Nansemond River and its surrounding ecosystem as well as the story of the indigenous people who live there. The story follows the generations who lived there, their displacement due to colonization, their return and how all of this affected the local environment.

The StoryMap is illustrated with various images to help tell the story. There are historical and current photos, old maps, newspaper clippings and pictures of artifacts. Also, there are interactive maps showing more precise locations of where historical accounts took place. According to Bass, old maps, like ones made by John Smith, can be hard to use to locate where sites actually are in modern times.

“You not only see where it is on a modern map, but you can zoom in on a specific spot to see the specific location,” said Bass.

To make this StoryMap happen, Bass worked with Dave Jasinski and Lauren Huey with Green Fin Studio, a marketing agency in Richmond. From the tribe, she worked with Leila Avery and Chief Keith Anderson to put it all together. They received funding from Chesapeake Bay Trust to help tell the story.

“We hope this website will get people excited to learn about traditional lifestyles and how the tribe lived in order to make informed plans for the future,” said Bass.