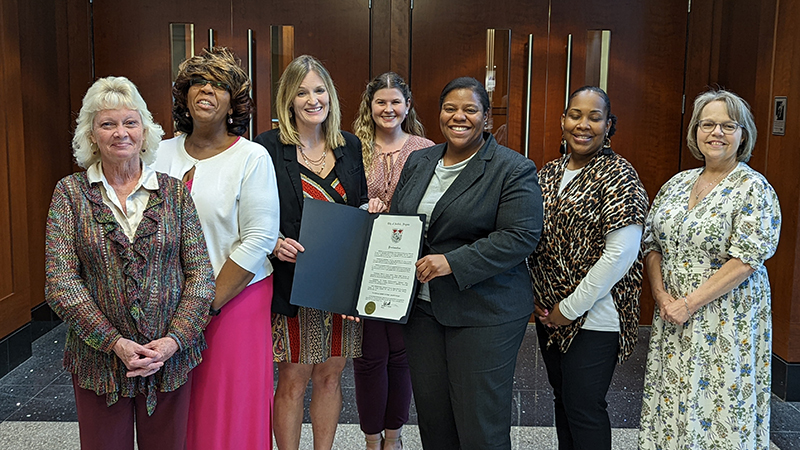 In accepting a proclamation in recognition of Crime Victim’s Rights Week, new Suffolk Commonwealth’s Attorney Narendra Pleas said she takes seriously the responsibility of helping people through some of their most difficult moments.

“Imagine the child who has suffered abuse at the hands of a person who’s supposed to care for them,” Pleas said at the April 20 City Council meeting. “Imagine a mother whose child is stolen from her or taken from her due to a drunk driver. Or a dad with three jobs who has a gun forced into his face while he’s working one of his jobs at a convenience store. Those are the people we help.”

Brittany Landon, victim/witness director in the Commonwealth’s Attorney’s Office, said crime victims can often feel like their voices and opinions are not heard.

“We feel fortunate to work for a city that values the rights of crime victims and understands the importance of having their voice heard in what can be a very traumatic, confusing time for victims of crime,” Landon said in accepting the proclamation. “Because there is such a large focus on ensuring the defender’s rights are being protected, victims historically have felt like their opinions and thoughts don’t matter when it comes to the criminal justice process.”

In the current fiscal year, which began July 1 and will continue through June 30, the Suffolk Commonwealth’s Attorney’s Office has served 694 crime victims. The office prosecutes all felony cases, intimate partner domestic violence and DUI cases.

Landon said the victim/witness program cannot meet every need, which is why it helps to collaborate with entities such as the Suffolk Police Department and Sheriff’s Office, the Genieve Shelter, the Virginia Victims Fund, Legal Aid and the CHKD Child Abuse Program.

Capping off the week, Pleas noted that the names of cases are referred to as the “Commonwealth versus insert name here.”

“It seems that in this system, our victims and witnesses can sometimes feel lost, or maybe appear that they don’t even exist, or that they’re merely tangential to this process,” Pleas said. “This is not what we need and it is not what we want. We need our victims and our witnesses to assist, to help us in this system, and we as an office, as a culture, need to realize their importance.”

Conversations with the Commonwealth’s Attorney

Narendra Pleas will host a series of hourlong “Conversations with the Commonwealth’s Attorney.” The events will be held at 6 p.m. on the following dates: