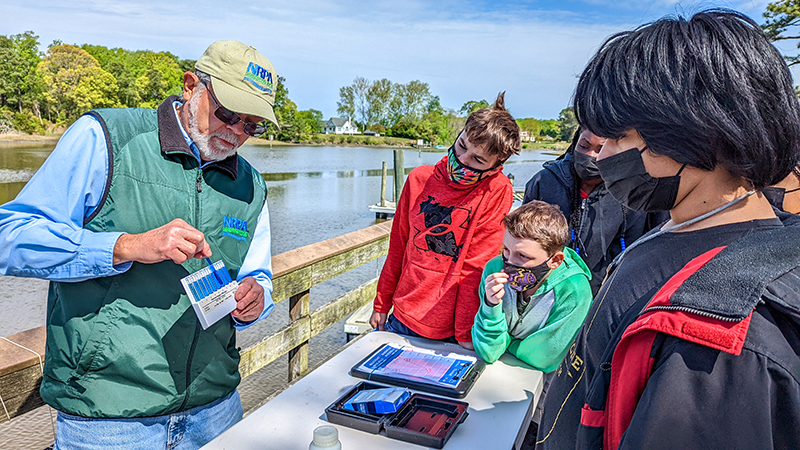 John Wass, vice president of the Nansemond River Preservation Alliance, shows seventh-grade students from Forest Glen Middle School how to check the oxygen level in Bennett’s Creek. Middle school students visited Bennett’s Creek Park Wednesday and Thursday as part of a trip designed to provide immersive experiences for them to learn more about the environment.

Talecia Lankford said it felt weird, yet normal, to put on the waders and boots to help pull in the seine nets from Bennett’s Creek that held tiny fish and other water life in them.

She and Kennedi White, both seventh graders at John F. Kennedy Middle School, pulled the nets with help from Mike Reiss and Cathy Roberts, volunteers with the Nansemond River Preservation Alliance.

“I think it’s more interactive,” Lankford said just after removing her gear, “and you actually get to experience what it’s like to do these activities instead of just watching.”

Lankford said she works a lot with kids and has spent time on the water with her grandmother, but for others, despite being in an area surrounded by multiple bodies of water, it was their first-ever immersive environmental experience.

White said touching the mummichogs they pulled in felt strange. Though small, those killfish were easy to spot, and plentiful in the seine nets, which hang vertically in the water with its bottom edge held down by weights and its top edge buoyed by floats.

Mummichogs are typically found along the U.S. and Canadian Atlantic coast in brackish and coastal waters, including estuaries and salt marshes and is a good indicator of marine water quality.

Reiss said the students were also finding grass shrimp, some of which had eggs in them, and baby flounder. They see more when the tide begins to come in.

Elizabeth Taraski, president and CEO of the Nansemond River Preservation Alliance, said it started the Marshfield Study program in 2013 for seventh-grade students in Suffolk Public Schools. It includes several interactive stations designed to help them learn more about the environment.

The stations, set up adjacent to Bennett’s Creek, included a geographical information system, or GIS, and stormwater station, a river critters and water quality station, a seine net station, a nature station with artifacts found in the local environment, and this year, it has a station to introduce students to fire and rescue and what it does on the waterways.

About 250 seventh graders came out over the course of two days to Bennett’s Creek Park, while another group went on an environmental boat trip a week earlier.

NRPA staff and volunteers, King’s Fork High School Ecology Club students and General Federation of Women’s Club members were all on hand to help with the hands-on activities, as were members from Engine 5 of Suffolk Fire & Rescue and the city’s Public Works Department.

“It’s a wonderful opportunity because this is, for most students, probably all students, their first opportunity that they’ve had in a Marshfield Study,” Taraski said. “And we have all these different components to get them interested in the environment. This is their home.”

The program is funded through grants by the Chesapeake Bay Restoration Fund, Dominion Foundation, the Community Action Coalition and the Suffolk Foundation.

Seventh graders from John Yeates and King’s Fork middle schools were at the park Wednesday, and students from Col. Fred Cherry, Forest Glen and John F. Kennedy middle schools came out Thursday. About 250 students took part over the two days.

Melissa Leuschen, a seventh- and eighth-grade science teacher at Forest Glen Middle School, said the program is a valuable one for her students.

Taraski said the goal of the program is to give students an understanding of the environment.

“It’s an opportunity for them to really develop an appreciation for the community in which they live,” Taraski said. “And so the more that they’re aware of the natural assets we have here, our ultimate goal is to educate them to be environmental stewards and to preserve and protect the waterways. And it’s working.”