No Glo for Shentel: Council denies permit for broadband facility 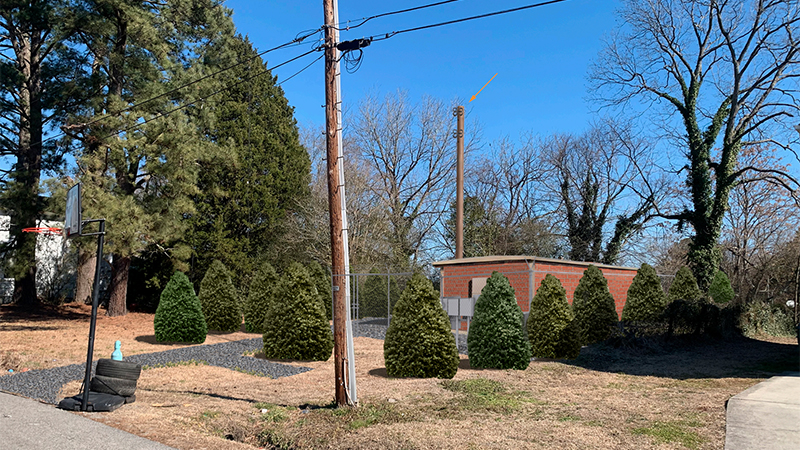 similar to the simulation shown here in the parking lot of the city's Health and Human Services Building to support the broadband service it plans to offer city residents.

Residents along South 5th Street where Shentel wanted to set up operations for the broadband service it is bringing to Suffolk said the company didn’t provide them adequate notice of their plans.

It also brought up concerns about property values and possible health effects of the company’s proposed utility facility on vacant properties in the neighborhood just off of East Washington Street.

So following a public hearing at its Wednesday meeting, City Council voted 7-0 against a conditional use permit for the company to allow it to set up the facility on properties at 120, 122 and 124 S. 5th St. Roger Fawcett left the council meeting prior to the vote.

The Planning Commission unanimously recommended Shentel’s permit last month, and the city’s planning office had also recommended the permit in its staff report on the request.

What it means for Shentel is unclear — a company official did not immediately respond to a request for comment Friday — but city officials suggested that the company find another location for the facility, preferably on a commercial site.

Assistant Director of Planning Kevin Wyne and City Manager Al Moor said the company could apply for another conditional use permit for another site, but that process would likely take at least 90 days to allow the planning office to evaluate the appropriateness of a new site.

The South 5th Street location was to serve as a fiber optic point of presence site for the company’s Glo Fiber broadband service.

It had planned to install a 30-foot-by-60-foot fenced compound with access to the street. Plans called for a 336-square-foot equipment shelter that was to hold the needed fiber optic equipment, along with a 45-foot utility pole with antennas at the top of it and a backup generator. Future plans called for another 336-square-foot equipment shelter and a 25-foot-by-60-foot compound expansion.

At the commission’s public hearing, Shentel senior network engineer Billy Hume said the company wanted to be at that location because the company needs to be centrally allocated, and the real estate market dictated where it could locate.

“In this real estate market, that’s about the only thing we could find,” Hume said at the time. “In a lot of locations, we have gone into residential areas where we work with the local planning department, have it rezoned to where it fits our needs.”

He also said there are distance limitations with its fiber that prompted the company to ask for the permit for the South 5th Street sites. Hume said that location would have allowed it to serve the greater part of the city. In the northwest part of Suffolk, it would have to be put in a smaller facility to serve that area.

Hume said the company had hoped to have its broadband service operating in some parts of the city by the end of this year.

During the first public hearing for the permit, Commissioner Johnnie Edwards advised the company to speak to the residents in that area.

However, Danny Agee of Shentel said the company was not able to set up a meeting with neighbors until Thursday, a day after the council’s public hearing.

James Richardson Sr., who lives on East Washington Street on the corner of South 5th Street, said he was not notified about the permit request and called it “a disgrace” to put the utility facility in a residential neighborhood without anyone knowing about it.

“First of all, you’ve got to realize if you put it there, our property values will be decreased,” Richardson said. “Who would want to buy a house if one of the neighbors wants to sell their house with a broadband station beside it? Second, I feel like it should be put in a commercial site rather than a residential site.”

David Beniamino of Network Building and Consulting, representing Shentel at the public hearing, responded by noting that the utility facility is allowed in a residential area with a conditional use permit, that it would be screened from the residential properties and it would have a small footprint. He also said the company had complied with all health and safety requirements set forth by the Federal Communications Commission.

Councilman LeOtis Williams asked for the reasoning behind the chosen sites for the facility.

“I represent Shentel, sir, so I can’t give you specifics on why that particular location was chosen,” Beniamino said, “other than the fact that it met all of the zoning criteria that the city has laid out, and we went through all of the proper channels to get the approvals of the Planning Commission.”

Agee said the company tries to locate its facilities where it can serve residents and get network services installed.

“We get network services in two different directions that will attach to the facility itself,” Agee said.

Wyne said signs denoting the public hearing have been on the proposed site since at least 15 days before the first public hearing.

Also, the city is obligated to notify residents of “adjacent property owners” — residents whose properties touch the proposed site or are directly across the street from it — when a land use on a property could potentially change. He said 11 such notices were sent to residents.

It is also required to put a notice in a newspaper about the public hearing, which Wyne said the city did with The Virginian-Pilot.

Williams said he saw the public hearing signs, but also saw signs saying, “Glo homes coming soon,” on the properties. He said he could understand residents’ confusion about what was proposed for the properties with such a sign.

Demetrius McLaurin, who lives on South 5th Street across the street from the proposed site, said he wasn’t against what Shentel wanted to build, but feared property values would go down as a result, and he expressed concerns about flooding on the street.

“It doesn’t really look good where they’re putting it at,” McLaurin said.

Said Williams: “The issue is this location. The issue is not the company coming here and doing business with us, ’cause we want that. It’s just that (the residents) don’t want it in the neighborhood.”