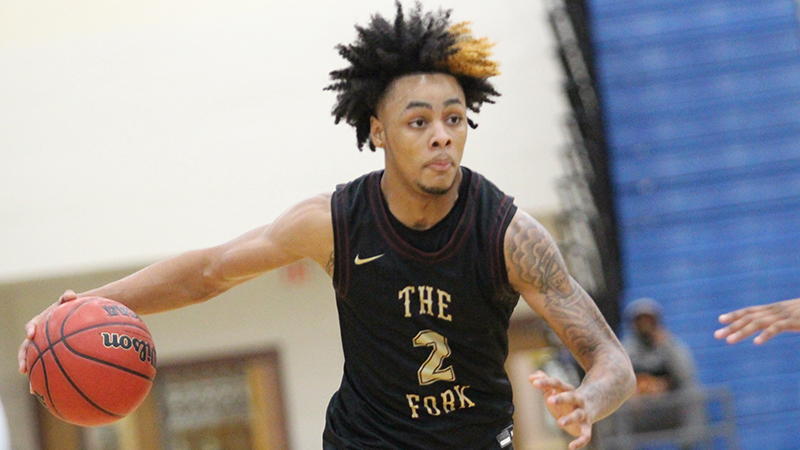 King’s Fork basketball standout George Beale was once committed to play college basketball in New York. He’s had a change of heart and will now play close to home at Norfolk State.

There’s no place like home. Not only did Dorothy declare it in the Wizard of Oz, but it applies to one of the top basketball players in the Hampton Roads area from the Class of 2022.

Last September, King’s Fork 6-foot-4 senior guard George Beale had given a pledge to play his basketball in college at Long Island University in New York. The Suffolk product later decommitted, and instead now has announced he will head to Norfolk State University.

A big difference is the mere 22.4 miles that separate King’s Fork High School from NSU as opposed to the more than 415 miles away that LIU is.

“Their coaches and players just made me feel at home. Obviously they have a winning program and have been very successful these last few years.  I love the way they play and I can definitely see my game fitting into the system there,” said Beale, chosen as Region 4A Player of the Year and First Team All-State during the winter for his stellar play.

“Playing close to home was just an added bonus because I’ll be doing what I love to do and I’ll have a huge support system being that I’m close. I feel that was just a plus.”

In his King’s Fork career, Beale scored 1209 points. As a senior, he averaged 23 points, eight rebounds and four assists per contest.

Coach Rick Hite believes NSU is getting a major addition.

“George played all four years, started for four years and helped turn King’s Fork into a nationally recognized program. He stayed patient, waited his time, developed and did so because he trusted the process,” Hite said.

“In my opinion, he should be considered one of the best to play at The Fork.  He’s an even better person, though. We’re very happy and proud of him.”

For Beale, it ultimately came down to the nearby Spartans and their Battle of the Bay rival, Hampton University, which has landed commitments in recent years from former Bulldogs like Tyler Chatman and Quentin Livingston.

“I really like HU, but I just feel that I better at NSU,” Beale noted. “They broke my game down and compared it to former players.  They love that I thrive on the break, can shoot it and defend, but most importantly that I’m just a tough kid.”

What does Beale believe he’ll bring to the table at the next level?

“From my perspective, I can see myself bringing a lot of energy on both sides of the ball and just making an instant impact,” he said.

There were plenty of milestones and achievements that stick out about Beale’s career at King’s Fork. Among them were helping the Bulldogs capture a state title his sophomore year, nearly posting a triple-double with a monster performance of 51 points, 10 rebounds and eight steals this past year vs. Hickory. He also led King’s Fork to its first ever unbeaten regular season.

Goals remain for Beale as he moves on to the college game. Above all else, he knows he’s representing his school and community when he puts on a Spartans uniform.

“I just want to be someone from my city and from King’s Fork that the kids look up to and I want to set an example for the next generation,” Beale said. “I feel like that’s what it’s all about.”